Tom Cruise may be in trouble at the box office and in the tabloid headlines but one of his films inspired the latest product release from Vancouver’s Avigilon.

The new features added to ACC 5.0, the fifth major release of AvigilonControl Center, were sparked by the iconic scenes of Cruise’s characterusing the simple flick of his hands to control the sequence of eventsin the film MinorityReport. 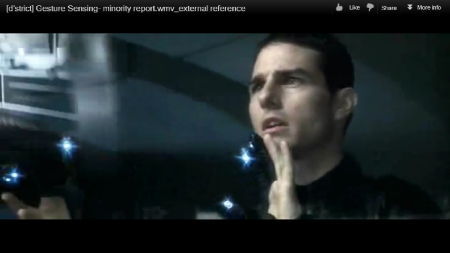 “That was some inspiration for us. We’ve all seen the movie and allwanted to see some of that come alive,” said Andrew Martz, chiefoperating officer at Avigilon, a video surveillance hardware andsoftware maker that recently went public on the Toronto Stock Exchange.

While ACC 5.0 won’t help anyone change the actual order of events inhistory like Cruise did in the movie, it is designed to give securityexperts more control options when viewing HD surveillance video. Itdoes that by incorporating technology used in gesture based gaming.It allows security experts to control how they view and play back HDsurveillance video using Microsoft’s Kinect for Windows. (You can watcha demo video of ACC 5.0 in actionhere.)

“We integrated with Kinect to use voice and body gestures to controlthe software,” said Martz. “It’s just a much more intuitive way tocommunicate. I might want to walk up to one of those (surveillance)monitors and zoom in on an image and now I can do that with Kinectinstead of a mouse or a keyboard.” (Although mouse, joystick andkeyboard control options are also included in ACC 5.0.)

The same footage can also be viewed by security officers inmultiple locations simultaneously in real time, allowing them tocommunicate in a collaborative way and hopefully respond to threatsmore quickly. So if a security guard in a facility here in Canada spotssuspicious stuff on video streaming live from Russia, he or she won’thave to eat up time describing or emailing the video clip to Russianpolice– they can both watch or replay it together at the same time to conferon what to do next.

And ACC 5.0’s virtual matrix feature allows users to adjust viewinglayouts, zoom in or out, rewind and isolate footage as it appears onvideo walls comprised of multiple monitors or TV sets (that featuresounds more likeCSI than Minority Report).

“It allows you to control what’s being displayed on all those monitorsfrom a central machine,” Martz said.

ACC 5.0 can also display content like maps, Web pages and point-of-saletransactions on video walls and remote monitors so investigators canpull up additional content that might help them in their quest toidentify and nab the bad guys.

Risk not centralized to one server
In a nod to disaster prevention and recovery concerns, up to 100servers can be synchronized using ACC 5.0 as a single cluster with nosingle dedicated management server. That makes it easy to add or changesettings across multiple users at once, and means all the data isn’tsitting there on one solitary server.

“We store all settings on every single server so if one server goesdown, the others are still up and running and your data’s backed up,”Martz said.

“Our end customer is the integrator and they sell to the end user so wehave over 1,000 partners worldwide in over 80 countries,” Martz said.

ACC 5.0 will be available starting in early 2013 but Avigilondemonstrated it at a few weeks ago at the global ASIS conference andtrade show in Philadelphia. (ASIS originally stood for the AmericanSociety for Industrial Security but since 2002 has been renamed ASISInternational to reflect the worldwide scope of the organization andits banner event.) Martz would not disclose the pricing for ACC 5.0 butsaid it will cost the same as 4.0.

ACC 5.0 will come in Core, Standard and Enterprise editions for usersofvarious sizes.