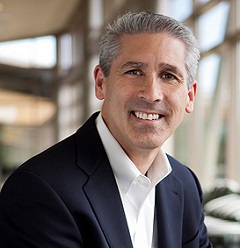 It’s always good to have friends in high places, so Microsoft’s Canadian partners must have been pleased in 2013 to see a familiar face become the vendor’s global channel chief.

Microsoft likes to cycle executives through its key leadership positions so they can gain experience across the business, so with Jon Roskill moving from the channel business  after three years to a role in product development, it needed a new vice-president to lead the worldwide partner group. Enter Phil Sorgen, who will be familiar as the president of Microsoft Canada for three-and-a-half years before returning to the U.S. as head of the U.S. Small and Midmarket Solutions and Partners (SMS&P) group.

While he ran Microsoft Canada, Sorgen reached No. 3 on CDN’s Newsmakers list in 2007, for a year that included launching Windows Vista, Office 2007, Windows Live and Visual Studio 2008, as well as the opening of a development centre in Richmond, BC.

Back in Canada, the revolving door of late in Sorgen’s old job continued. With Max Long returning to Seattle for a U.S. role after barely a year at the subsidiary, and after an extensive search, Microsoft named Janet Kennedy to succeed him. She’s the third Microsoft Canada president in three years, with Eric Gales and Long succeeding Sorgren.

The changes at Microsoft Canada haven’t been confined to the president’s suite. Canadian channel chief Greg Lardner left the company in September, and was replaced by Rob Stevens. Dennis Cerasoli also replaced Mark Dodds as vice-president of SMS&P. And at the top of the org chart in Seattle, president and CEO Bill Gates announced his pending departure, once a replacement is found.

Despite all the changes, Microsoft managed to open two new retail stores in Canada in 2013, adding locations in Edmonton and Burnaby, BC to its flagship location at Toronto’s Yorkdale Mall. The Surface 2 tablets were also launched with a splash at Kool Haus in Toronto, leading a busy year for product launches that also included the Xbox and Windows 8.1, which was perhaps the most anticipated incremental OS upgrade ever.

Cloud computing was a central theme of the summer’s Worldwide Partner Conference. Cloud is behind Microsoft’s desire to shift from a software company to one focused on devices and services. It sees those devices as a cloud-on ramp, and the cloud as the way to deliver applications and services to millions of connected devices. Microsoft’s partner program will be revamped for 2014 to bake cloud requirements into every competency, and partners will be incented to make cloud part of every deal.

While Canadian partners are being encouraged to invest in the cloud, they’ll also find it easier to interact with Microsoft. While the vendor previously interfaced with partners with separate channel teams through each of its primary go to market business units – SMS&P and enterprise – the channel organization in Canada has now been unified into one group.

Microsoft’s data centre of the future

Every Microsoft partner will need cloud competencies next year