Microsoft is bringing Office 365 to Android, but certain restrictions apply.

To get Office 365 on your Android device you need to be in the U.S.; other markets will follow. It needs to be an Android phone; it’s not yet available for Android tablets. And you can’t buy it separately; Office Mobile for Android is only available as a free benefit as part of certain Office 365 subscriptions.

Microsoft made the announcement in a blog post on Wednesday by Guy Gilbert, a senior product manager with Microsoft focused on Office apps.

“The release of this app shows that we’re committed to keep providing additional value for Office 365 subscribers,” said Gilbert. “Office 365 subscribers will now be able to access, view, and edit Word, Excel and PowerPoint documents with Windows Phone, iPhone and Android phones.” 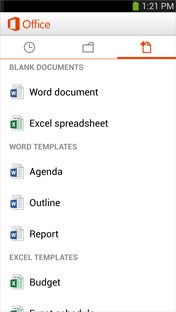 Office Mobile for Android is supported on phones running Android 4.0 or higher with a qualifying Office 365 subscription plan. Availability in markets besides the U.S. is expected “over the next several weeks” ramping-up to 33 languages and 117 markets. There’s no additional cost for Office 365 subscribers, and it can’t be purchased separately.

Related News
The cloud tipping point in Canada has arrived: Microsoft
Partners can earn more going to the cloud with Office 365

Gilbert said Office Mobile is phone-only for now as Microsoft optimized the user experience for the screen size.

“We built Office Mobile for Android phones to ensure a great Office experience when using a small screen device.  Therefore, you will not be able to download and install Office Mobile for Android phones on an Android tablet from the Google Play store,” wrote Gilbert.  “If you have an Android tablet, we recommend using the Office Web Apps which provide the best Office experience on a tablet.”

Several commenters questioned why Canada wasn’t included in the initial launch, to which Gilbert responded, “We’ll be launching in Canada in the next several weeks. Hang in there!”

Jeff Jedras
A veteran technology and business journalist, Jeff Jedras began his career in technology journalism in the late 1990s, covering the booming (and later busting) Ottawa technology sector for Silicon Valley North and the Ottawa Business Journal, as well as everything from municipal politics to real estate. He later covered the technology scene in Vancouver before joining IT World Canada in Toronto in 2005, covering enterprise IT for ComputerWorld Canada. He would go on to cover the channel as an assistant editor with CDN. His writing has appeared in the Vancouver Sun, the Ottawa Citizen and a wide range of industry trade publications.
Previous article
Solution provider takes a shot at multi-cloud deployments
Next article
Bell offering iPad and iPad mini at select Bell stores