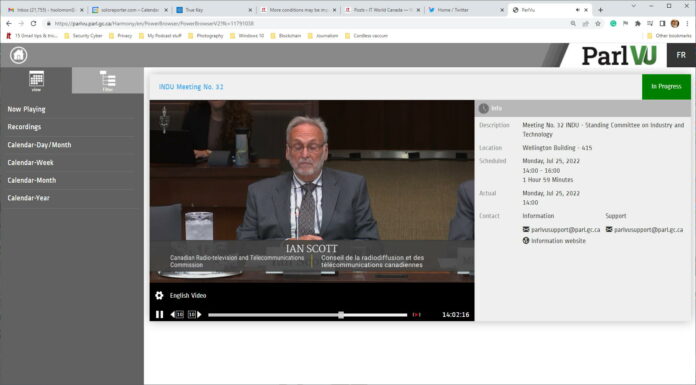 The head of Canada’s telecommunications regulator said this month’s huge internet and wireless network failure at Rogers could result in more regulation of the industry, but also suggested there is nothing the regulator can do can prevent service interruptions.

“What this outage has taught us is we need more measures, we need greater network reliability, we need greater measures, prescribed measures for the industry to co-operate in emergencies. So this is unprecedented, but it has now happened and there need to be further steps taken. We will take steps, and the [Industry] minister has indicated he has taken certain steps.”

Pressed by opposition members about possible fines against Rogers, Scott said the commission is still going over Rogers’ written detailed explanation of the event.

Asked if what Rogers did after suffering a 22-hour outage on its wireless network in April, 2021 was satisfactory and could have helped resolve this month’s problem, Scott chuckled.

“With hindsight I would now say maybe they should have been focussing on the [network] core,” he said. Scott then quickly added that Rogers addressed the 2021 issue — the implementation of an update from equipment provider Ericsson — and introduced measures that would lessen the probability of that particular incident happening again. “But one can never anticipate whether outages can happen given different circumstances,” Scott also said.

He appeared to accept Rogers’ explanation that this month’s incident was unprecedented. Earlier in the day a Rogers official told the committee that two IP traffic distribution routers from different manufacturers unexpectedly reacted differently to a maintenance update.

“This was an unprecedented event of the way two elements of equipment interacted together that was not known,” Rogers chief technology and information officer Ron McKenzie told the committee.

Scott was reminded that the commission has had a 911 service action plan since 2014, and was then asked how Rogers wasn’t adequately prepared for a crisis.

“It was very difficult to prepare for something that was truly unprecedented. This impacted the core of Rogers’ network …. They were unable to connect. It was a very unusual circumstance. Rogers had an outage, other companies have outages from time to time and it will affect some services … We now need to focus on how do we assure in this type of situation emergency services are connected.”

Earlier in the hearing, Industry Minister François-Philippe Champagne hinted the government might impose obligations on the telecom industry to reduce the odds that a national communications outage by a carrier doesn’t happen again.

Scott dismissed the idea of making telecommunications a publicly-owned utility, saying the cause of the Rogers outage was “a technical issue.”

Asked if the CRTC could have had regulations that would have prevented the July 8 incident, Scott replied, “I don’t think so.”

In fact he went out of his way to signal that carriers, and not government regulation, should be the force behind improving telecom network resiliency. “Specifically with respect to the outage and network reliability, I think this is a situation that can be addressed by the industry. It’s in their collective interest to do so, and it’s in our interest [the CRTC’s] and that of ISED [the department of Innovation, Science and Economic Development, otherwise known as Industry] to make sure they do so.”

“Both the department [ISED] and the CRTC will insist and require the industry to make the necessary arrangements. They do have an incentive to work together to address this kind of outage because it could happen to anyone,” Scott replied.

“So we set up a system that failed,” countered Masse. “The system is heavily regulated, has very little competition, and on top of that has an essential service for Canadians, including 911 … and we are going to rely on the industry to fix that problem.”

Scott responded that the government and the CRTC’s job is to make sure carriers put in measures to address this problem.

And if that fails, Masse continued, what if a national outage happens again?

“I don’t have a crystal ball,” replied Scott, “and I can’t predict failure. I hope to ensure the opposite.”

Howard Solomon
Currently a freelance writer, I'm the former editor of ITWorldCanada.com and Computing Canada. An IT journalist since 1997, I've written for several of ITWC's sister publications including ITBusiness.ca and Computer Dealer News. Before that I was a staff reporter at the Calgary Herald and the Brampton (Ont.) Daily Times. I can be reached at hsolomon [@] soloreporter.com
Previous article
Hardware vendor differences led to Rogers outage, says Rogers CTO
Next article
Government of Canada invests $3 million to help SMEs adopt low-carbon processes and products