Back in 1997 when Panasonic launched the ToughBook it entered a very crowded marketplace. There were more than 25 brands of hardware at the time. Do you remember these names: Compaq, DEC, Gateway, eMachines, Packard Bell/NEC, AST, and IBM?

There are fewer notebook manufacturers today as Panasonic celebrates 20 years of the ToughBook, but the company’s original focus has not changed. Back in 1997 Panasonic made the ToughBook to address the gap in the marketplace for ruggedized technology.

In those 20 years, the ToughBook has survived the Siberian winter, taken some bullets in the Afghanistan conflicts and climbed Mount Everest.

Over the course of two decades, the Panasonic ToughBook has only gone through six iterations. In that time, they have gain about 90 per cent of the public safety market that includes the Police, EMS, Fire, Department of Defence in Canada and the U.S, according to Susan Black, senior director of IT & Security Solutions for Panasonic Canada’s Enterprise Solutions Division, based in Mississauga, Ont.

“It does have the cool factor, but we tried to make it tougher over the years. You can powerwash the ToughBook and no water will enter it. You can temperature shock it from hot to cold and it will turn on,” Black added.

Panasonic is working on expanding the market presence of ToughBook as it enters its third decade. Black said the company wants to do more in other sectors such as the utility market, field service, oil & gas, telco and manufacturing.

Ashley Evans, marketing manager, computer and IT solutions, for Panasonic Canada, said the company has a philosophy when it comes to ruggedized hardware. Panasonic is end user focused in the engineering and design of the ToughBook. The company holds end user forums in Canada, the U.S. and in Europe to get direct input from customers on the ToughBooks next direction.

“We work with some of the major software providers on computer-aided dispatch and electronic patient care records so that we can make it compatible with the ToughBook. Also, we make sure it’s properly framed for the screen,” Evans said.

The latest version of the ToughBook has a 12-inch detachable screen that can be used as a tablet in the field. That screen has a 3.2 aspect ratio. Based on end user feedback, Panasonic learned that in-car real-estate is important to users and designed a form factor specific for police cars and other public safety vehicles. Another issue was that Panasonic is dealing with an aging workforce who want a bigger screen size in the vehicle. Also, the 3.2 aspect ratio will not impede the air bag safety zone. 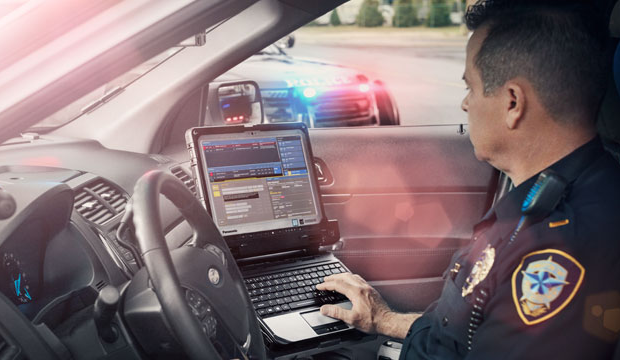 The next chapter for the ToughBook may see Panasonic make more devices and have smaller screen sizes, Black said.

The company already has a 4.7-inch device. Black said that it may look like a smartphone but they don’t want to call it that. “It’s a device with phone capability. Making a new smartphone is not our direction,” she said.

Panasonic is working to enter new markets for the ToughBook such as handhelds, transportation, logistics and manufacturing. Maybe healthcare someday, Black said.

To support ToughBook’s direction, Panasonic Canada has a fully-equipped configuration centre that can integrate third-party software providers along with other solutions from channel partners. Black said that each ToughBook is configured to spec and while it goes through channel partners the units are eventually shipped to the IT departments fully imaged and embedded with wireless capabilities and GPS. “They come plug and play ready,” Black said.

Panasonic Canada employs a hybrid channel strategy where most of the ToughBooks go through distributors such as Tech Data Canada, Ingram Micro Canada, and Synnex Canada along with boutique distributors such as Blue Star and ScanSource. Panasonic also goes direct to channel partners such as Compugen, CompuCom Canada, CDW, Softchoice, PCM/Acrodex, PC Corp, and others because of government regulations.

Typical margins on ToughBook are about 10 points, but Black said channel partners can make even more money with integration of the product. “This is not a standard notebook where prices keep being driven down as the solution provides end users more features that are integrated than other laptops.  This creates a better ROI for the end user. With less than one per cent failure rate they do not have to service these products like consumer grade notebooks,” Black said.