Panasonic is hoping to capitalize on the popularity of comic books and comic book-inspired movies by launching its own comic book series featuring its rugged computing devices.

“Unbreakable Valor” is a limited-edition comic book series written by a team of industry veterans that features Panasonic Toughpad rugged tablets and  follows the League of Valor, which Panasonic describes as “superpowered heroes who rely on Panasonic enterprise technology solutions” led by IT specialist Kevin Massing.

Panasonic is also launching a promotional sweepstakes around the comic book series, with prizes such as a Toughpad rugged handheld tablet, a trip for two to ComicCon in San Diego, and the opportunity to be transformed into a featured character in an upcoming issue of the series.

The first issue of Unbreakable Valor is now online, and the second issue is scheduled for release late in 2014. 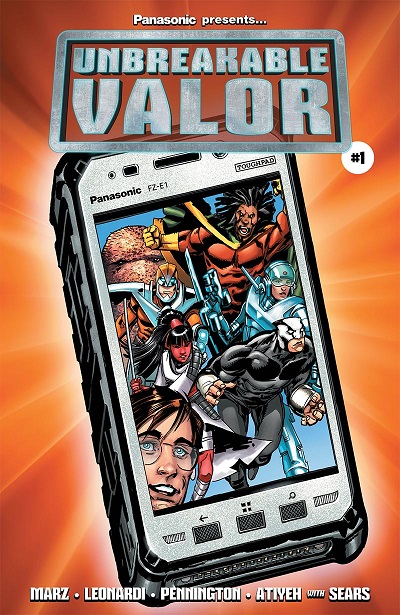 It’s all meant, of course, to promote Panasonic’s Toughpad FZ-E1. It’s a fully-rugged 5” handheld tablet powered by Windows Embedded 8.1 Handheld. It can be submerged in water, dropped from up to ten feet on concrete, and its 14-hour battery can be hot-weapped. It’s designed for mobile professionals in the transportation and logistics, government, utilities, manufacturing, retail and field services verticals.

“While ‘Unbreakable Valor’ may not be a true story, our Toughpad rugged tablets are relied upon each day by real-life heroes around the world – from soldiers on the battlefield, to first responders at the scene of an emergency, or utility workers who restore power in a storm,” said Marca Armstrong, vice-president, marketing with Panasonic North America, in a statement. “We viewed this project as a fun, creative way to spotlight the vital work our customers do and the role that dependable technology plays in helping them overcome extreme circumstances and accomplish their missions.”

Jeff Jedras
A veteran technology and business journalist, Jeff Jedras began his career in technology journalism in the late 1990s, covering the booming (and later busting) Ottawa technology sector for Silicon Valley North and the Ottawa Business Journal, as well as everything from municipal politics to real estate. He later covered the technology scene in Vancouver before joining IT World Canada in Toronto in 2005, covering enterprise IT for ComputerWorld Canada. He would go on to cover the channel as an assistant editor with CDN. His writing has appeared in the Vancouver Sun, the Ottawa Citizen and a wide range of industry trade publications.
Previous articleNew BlackBerry business unit will monetize QNX, Certicom
Next articleMade in Toronto mini PCs