Paul Cormier, who was named president and chief executive officer of Red Hat in 2020 after it was acquired by IBM, is passing the torch to Matt Hicks, who has moved up from his previous role of executive vice president of products and technologies, the company announced today.

Cormier, who was rumoured at May’s Red Hat Summit to be retiring soon, is instead stepping up to become Red Hat chairman.

“After 21 years with Red Hat, I have decided to make the move fully into the role of Chairman,” Cormier wrote in an email to Red Hat staff. “I will spend my time working with Red Hat’s senior management team on activities focused on portfolio growth and leadership development and with our strategic customers and partners to more effectively marry our strategy with theirs. I also look forward to continuing to work with the entire team on our M&A strategy.” 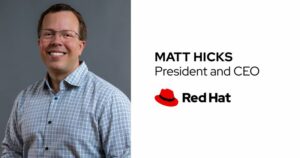 As executive vice president of Products and Technologies, Hicks was responsible for the entirety of Red Hat’s product strategy and engineering. He joined the company in 2006 as a developer on the IT team, and quickly rose to leadership positions across the organization, most notably as a foundational member of the engineering team that developed Red Hat OpenShift, which has grown into the backbone for hybrid cloud deployments across industries, now serving as the industry’s leading enterprise Kubernetes platform.

” I’m honored, proud and thankful as I step into this role, to both serve you and help take Red Hat to even greater places,” Hicks said in an email to Red Hatters. “There’s a significant opportunity ahead of us and I’m eager to help us seize it.”

The company said in its announcement that Cormier will serve as Red Hat’s strategic touchstone and key advisor whose focus will continue to be on scaling the company and accelerating customer adoption of open source technology. Having led more than 26 acquisitions at Red Hat, he will also work closely with Red Hat leadership on future M&A strategy, and will continue to work alongside IBM chairman and CEO, Arvind Krishna in scaling and accelerating Red Hat while maintaining the company’s market neutrality.

Both Cormier and Hicks will report to Krishna.

“I don’t think Red Hat would have become Red Hat without Paul Cormier,” said Stephanie Wonderlick, vice president of brand experience and communications at Red Hat, in a post on LinkedIn. “I’m grateful for Paul Cormier and excited for Red Hat’s opportunity ahead with Matt Hicks at the helm as CEO, and Paul as chairman. Let’s go!”

Lynn Greiner
Lynn Greiner has been interpreting tech for businesses for over 20 years and has worked in the industry as well as writing about it, giving her a unique perspective into the issues companies face. She has both IT credentials and a business degree
Previous articleFake Cisco network gear sold during supply chain shortage
Next articleTCS launches Pace Port Toronto research and innovation centre