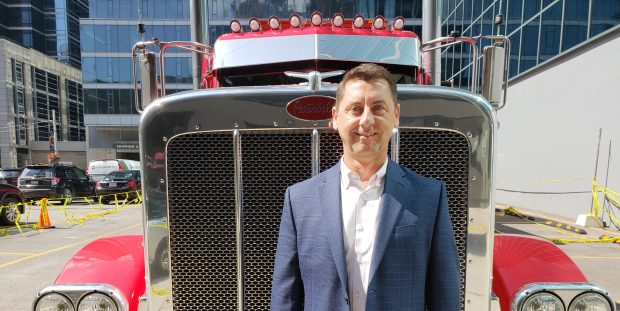 Red Hat is on tour.

Rather than having customers approach the technology company first, Red Hat decided to take a more proactive approach by cramming a bevy of open source platforms and technologies into an 18-wheeler trailer and visit customers directly across North America. The tour has been a resounding success, says Red Hat’s marketing lead for the West region, Chris Hawyer.

“It’s hard for everyone to attend the summit and all of our other events,” Hawver told CDN during a stop in Toronto. “This seemed like a perfect way to go directly to our customers.”

Red Hat is following up stops in Vancouver and Victoria earlier this summer with a recent stop in Toronto, before moving on to Montreal and Quebec City this week. The touring trailer has made 38 stops so far in the U.S. and Canada since the end of May. Hawver says they plan to make 120 stops across North America by March 2019.

Each stop sidesteps the expected sales pitch these types of marketing campaigns usually include, explains Hawver. It’s about solving customer problems, which are different depending on which group of people you’re talking to. Hawver and the rest of the team reach out to partners and customers near their next stop to get a feel for what they would like to learn about, he adds.

“All of the presentations are done by our solution experts,” says Hawver, noting those experts are either there in-person or working remotely from their office. Even CEO Jim Whitehurst has made brief appearances via teleconferencing. “We’ve been recommending that you bring as many customers together as possible, and get them to test out their ideas and collaborate. We’ve never had a session end on time.”

Red Hat has hosted more than 2,600 customers and at least 200 partners in the trailer. Hawver says they’re tracking close to 8,000 attendees in total. The virtual reality “edutainment” station focusing on storage, according to Hawver, is especially popular. Some of their next stops will include meetings with three of Canada’s largest telcos, said Fabrizio Fiori, Red Hat’s director of solution architecture.

One of Red Hat’s partners, Arctiq, was on-site during the trailer’s latest stop in Toronto. Joel Cripps, a consultant on the Arctiq team, told CDN that a lot of partners and customers have been asking questions about bleeding edge technology that’s scalable, such as Kubernetes, containers and Red Hat’s OpenShift platform.

“We’re helping them transition to a containerized environment, combined with a lot of security automation,” sad Cripps.