Salary compensation metrics are out of whack

The CEO and co-founder of a credit card processing company in Seattle (Dan Price of Gravity Payments) wanted to “do the right thing” for his staff, so he:

It sounds like the right thing for a boss to do, but boy what uproar it caused:

A great concept in theory – reduce the CEO-to-worker pay spread – but that train left the station years ago.

Compensation – salary, fringe benefits, etc. – has always been tricky.  There are guidelines, laws, restrictions, general practices, value of the person, personal value to consider. In other words, it’s a combination of art and science.  And as people climb the corporate ladder, decisions become even murkier.

When it comes to hired senior management, the company boards add doses of mysticism, ego, shareholder greed and peer comparison.

I don’t agree with the harsh conclusion Katalin Haynes, a researcher at the University of Delaware arrived at that many hired CEOs have extreme manifestations of confidence, excessive feelings of self-importance, fantasies of success and power and arrogance.  That sounds more like someone in a government office, rather than the head of a profit-oriented company.

Someone once told me that a college degree proves that you have a capacity to learn but today, it’s the bottom rung for people beginning their career.

Across the board, the degree will get you in the door but people quickly find they’re facing lukewarm wage growth and limited bargaining power with bosses–especially since you may be competing with individuals who have advanced degrees.

Shifting Sands – There’s no guarantee that the job/career you had your eyes on when you entered college will be the one with the big salary waiting when you graduate.  It’s a constantly moving target. Remember; your career is a marathon, not a sprint, so pick one you can live with.

If you’re one of those folks who are in specialized skill fields like technology, finance, engineering or software; you probably didn’t worry too much about it because the starting salary was still a lot better than people with “lesser” degrees.

But even in the high demand areas there is a wide spread between the highest and lowest paid positions and the spread continues to grow. 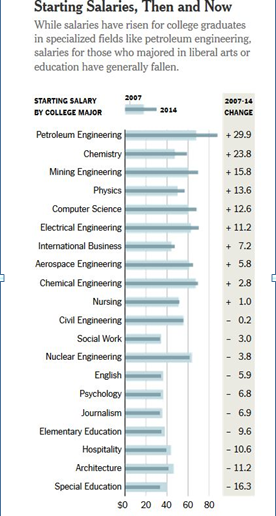 Folks at the top are treated differently than those in the middle and way different from those on the bottom.

Even with unemployment way down, only the people who walk on water march in and demand a salary increase.  Everyone else knows in the inner recesses of their minds that they aren’t irreplaceable.  While it may be difficult to accept, given the time, assistance and individual’s commitment/drive, someone else can be taught the necessary skills.

With the decline of the jobless rate in the U.S. and many other countries, there are signs of modest improvement in wages for the general workforce.

Good, Bad – There’s a big salary spread (even in a given career choice) between the best pay and tolerable pay.  The bad news is the disparity is growing.

In most fields, the pay gap between the highest- and lowest-paid positions continues to grow.

However, that’s the base salary.  Few people also take into consideration the benefits, which have improved in recent years such as better family health/dental coverage, open educational opportunities, improved vacation and family healthcare time.

Many firms in the technology industry have expanded these benefits to include meals, personal healthcare facilities, flexible time off, paid sabbaticals, childcare, and more … lots more.

Microsoft raised the bar on keeping talent when they announced they’d give mothers 12 weeks of paid maternity leave (the U.S. is the only industrialized country that doesn’t have that as a rule).

So Netflix went over the top, telling their people they could have up to a year maternity/paternity leave.

As I recall, I’d go to the office to relax when our two arrived!

Of course, that was nothing like a boss I had years ago who jokingly (we think) said if you don’t come in on Saturday don’t bother coming in on Sunday because you won’t have a job.

Believe it or not I really liked him.  You knew where you stood, there was no hidden agenda, do your job well and you were rewarded.

What more could you ask for, really?

I never knew – didn’t care – what he made because private companies don’t have to publish senior management salaries.

But somewhere along the line, the salaries for the heads of U.S. companies got a little out of whack in the U.S.  and most industrialized nations.

Today, the average CEO pay for the 350 largest U.S. firms jumped 997 percent between 1978 and 2014.  While non-supervisory folks’ pay rose 10.9 percent, according to the Economic Policy Institute.

Contrary to most people, I don’t call it executive greed.

For the individual it’s more like pro athlete contracts.

One player gets $X annually and the next thinks, “Cripes I’m better than him; I want $X+Y.”

Super Heroes – It has only been in recent years that the aura of the super boss has emerged who can mold the flow of a business with his/her bare hands.  Even though it requires a team to deliver profits, some super bosses still demand–and get–super high salaries, even when corporate performance has been modest at best.

It’s not about the money (okay, maybe a little).  It’s just a way to keep score.

In addition, you need to shine the spotlight on executive compensation “experts” who make their recommendations to good ‘0l boy and go-through-the-motions boards.

Face it, there’s no perfect formula for workforce salaries nor senior management compensation.   It’s just that pay for the people who keep the wheels on the track doesn’t get as much coverage as the top dog(s).

Experts are constantly tweaking the performance metrics and formulas for short-term and long-term growth and about the only thing these compensation folks agree on is there’s no perfect incentive.

To add some sort of warped logic to the pay, some compensation experts and boards use the “comparison with their “peers” approach.

Weird Comparisons – Executive compensation “experts” and mediocre boards of directors often justify the need for a big salary for CEOs based on comparable positions of responsibility in other companies–even when the skill sets, challenges, opportunities for the firms were impossible to compare.

I guess what they’re saying is the person running Jarden (diversified consumer products firm) could easily be “stolen away” by HP, Oracle, Adobe, Estee Lauder, Loews, Whole Foods, NetApp or heck, even Apple.

I’m sure most of the bosses in those firms simply said, “WTF!”

There are some senior managers who are really worth their pay because they’re dynamic, they seem to have the ability to see around corners and build a strong team that is loyal and committed to the company’s growth.

In addition, some of the annual pay numbers are overstated because they’re based on a reasonable salary plus stock bonuses linked to the company’s long-term financial and stock performance.

Then there are executives like Warren Buffett, of Berkshire Hathaway, who would do his best no matter what he was paid annually; and Google’s Larry Page who gets a buck a year.  Of course they both own huge chunks in their companies worth billions.

Face it, there’s no perfect pay formula in business but that doesn’t stop folks from trying to come up with the “perfect” compensation spread for the entire organization.

Huge Jump – Since the 1960s, the spread between the income of the average employee and the senior executive has continued to grow; but then, the value of an individual’s contributions to a firm’s success is difficult if not impossible to determine precisely.

Most bosses readily agree that a firm’s productivity and success doesn’t begin and end at the top.

People who worry about what the other guy (or gal) is making say a well-compensated workforce does deliver to the bottom line.

A recent global study by Chulalongkorn University’s Sorapop Kiatpongsan and Harvard Business School’s Michael Norton looked at the financial spread between the top and bottom of companies in various countries.

While free enterprise countries can’t very well dictate a specific ratio, the U.S. SEC (Securities and Exchange Commission) recently ruled that companies had to reveal the pay gap between the CEO and typical employee.

That might throttle some of the wild recommendations from compensation consultants, give the boards something to think about and make shareholders holler a little louder.

Government officials also look at other things that will penalize top earners like huge taxes reasoning that really won’t hurt the morale of the executive or cause the companies to underperform.

They might think twice about that because if they’re lucky, they may snag one of those jobs when they leave office.

Then they’ll agree with King Louis XVI, “It’s good to be the king.”

Keep in mind though; the really good/valuable boss doesn’t make all the decisions … just the tough ones.  And sometimes – as the Seattle CEO and Walmart have found out — there’s no really good decision.