Canadians can now get their hands on the latest version of Samsung’s Android smart phone, the Galaxy Note 4.

Available in from Canadian electronics retailers and carriers Bell, Telus Rogers, Wind Mobile, Videotron, SaksTel and Eastlink starting today, Galaxy Note 4 has a no-contract price from $748.95 to $803 while two-year contracts go up to $299.

The 5.7-imch phone comes with improved S Pen, its integrated stylus device system that boasts of 2,048 touch pressure points for easier and “more natural” writing and photo editing. Now the S Pen can be used to “add emotion, humour, clarity and style” to everyday tasks, according to Samsung. 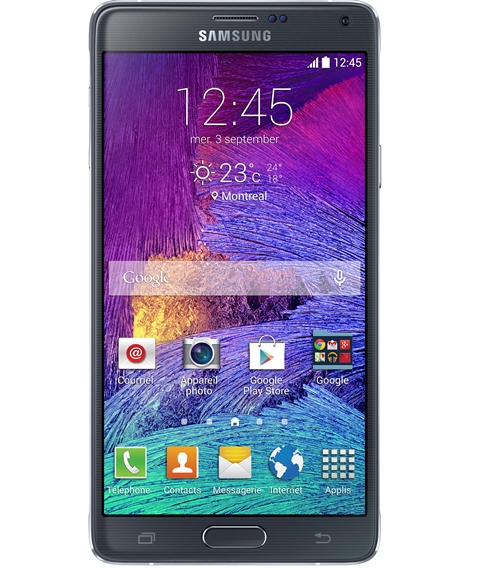 The company said enhancements can be found in: the front and rear cameras, battery charging capabilities and the 5.7-inch Quad HD (2560×1440) Super AMOLED display.

The phone runs on the Android 4.4 KitKat operating system and is powered by a 2.7 GHz Quad Core processor from Qualcomm.

The 3.7 megapixel front-facing camera has an f-stop of 1.9 and a default 90 degree shooting angle that can be ratcheted up to 120 degrees to get more people into the frame. “Bigger selfies for bigger moments,” declares the Samsung marketing material.

The battery has an Ultra Power Saving mode that helps maximize battery life. This means that even at 10 per cent charge, users can still receive calls and text for up to 24 hours.

The phone also has multiple microphones and an improved speaker phone with noise cancellation features.

For the security conscious, the Galaxy Note 4 also comes equipped with an improved fingerprint scanner.

But Samsung wants to focus attention on its S Pen enhancements.

“The New Galaxy Note 4 introduces the most refined Note experience to date by featuring innovative technology including the enhanced S Pen which allows Canadians to add more of themselves to their mobile experience,” according to a statement from Paul Brannen, executive vice president for mobile solutions at Samsung Canada.

Apart from the added precision, the S Pen is now more akin to a computer mouse, the company said. The pen can be used to select and move information, resize windows as well as drag and drop items between different apps. Users can also hand-write emails, and add hand written messages on photos.

In additional to the typing and writing functions, the S Note application  now comes with Snap Note feature that allows users to take a picture or notes on paper or a whiteboard and then quickly  convert it into an S Note.

Hashtag Trending – Google makes it easier to build the next Pokémon...

Apple and Cisco use partnership to tackle enterprise security with new app,...

Samsung DeX, Gear 360 go on sale in Canada on Friday