Samsung sees the connected world as a place that is widely accessible and open. And, this vision makes up the basis of the company’s first strategy for Internet of Things that they are branding “SmartThings Cloud”.

The IoT strategy from the South Korean tech giant includes a partnership with Google as well as two developments for SmartThings. The first is Bixby 2.0 and the second is in augmented reality.

Bixby 2.0, which will have an SDK through Viv Technologies, is Samsung’s intelligence solution that will be made available on its displays and refrigerators. This is initially targeted at consumers and will feature deep linking capabilities and natural language abilities. What Samsung is saying here is your fridge will be able to recognize you – the user — and be able to collaborate with you using predictive, personalized data.

There is a channel angle to this development as Samsung will be providing the tools to bring Bixby 2.0 into a wider number of applications and services. Samsung has introduced a Bixby private beta program, but the company said it plans to have general availability soon.

Also on display was Project Ambience, a small dongle or chip that can be applied into a wide variety of objects, allowing them to seamlessly connect, and create a ubiquitous Bixby experience.

On the AR front, Samsung has forged a partnership with Google that will bring developers the ARCore SDK. The plan is to bring AR capabilities to Galaxy S8, Galaxy S8+ and Galaxy Note8 smartphones.

DJ Koh, President of Mobile Communications Business for Samsung, said IoT is a big step forward along with the company’s intelligent ecosystem and AR capabilities. Through an extensive open collaboration with business partners and developers Samsung is unlocking a gateway to an expanded ecosystem of interconnected and intelligent services that will simplify and enrich everyday life.

Koh also said that Samsung is combining its existing IoT services such as SmartThings, Samsung Connect, and Artik into one united IoT platform branded SmartThings Cloud. 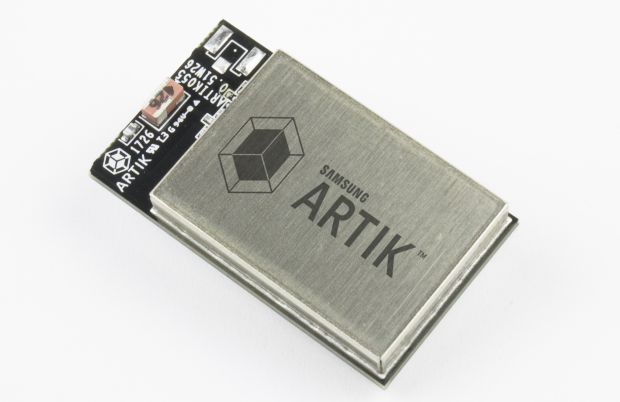 This cloud-based hub can connect and control IoT-enabled products and services from a unified touchpoint. Expectations for the SmartThings Cloud will be to build one of the world’s largest IoT ecosystems.

With SmartThings Cloud, developers will have access to one cloud API across all SmartThings-compatible products to build their connected solutions and bring them to more people. It will also provide secure interoperability and services for business developing commercial and industrial IoT solutions.

Samsung supporting this new IoT strategy with an announcement that Artik will now contain secure systems-on-modules and services. The Artik IoT platform will now be able to deliver device-to-cloud security for companies to build, develop and manage secure, interoperable, and intelligent IoT products and services for everything from smart homes to high-tech factories.

In addition, Samsung announced that the Artik IoT platform will fully integrate with the SmartThings Cloud as well as enable interoperability with both Samsung and third-party IoT devices and IoT cloud services.

Samsung is banking on Artik to provide an avenue for developers and channel partners to create secure IoT products and services including production-ready hardware, software and tools, cloud services. The addition of new Artik secure IoT modules enables device-level protection for safe data exchange, interoperability, and secure access to Artik IoT services including device onboarding, orchestration, management, and over-the-air updates, according to Samsung.

James Stansberry, senior vice president and GM of Artik IoT for Samsung, said security in the age of IoT means new levels of complexity and risk. The next generation of IoT products and services will be more deeply integrated into people’s lives than ever before. Unfortunately, most companies are not prepared to address the challenges of securing every link of the chain, from device to IoT cloud. With the Artik IoT platform and Samsung’s new security hardened system-on-modules, it should be easier and more affordable for companies to adopt best security practices and deliver trustworthy products that will shape the future of IoT.

In addition to Artik, Samsung is also expanding its IoT platform business path to profitability. This expansion includes the recent launch of the new Artik service to monetize data from interoperable devices and enable an IoT data economy, as well as the addition of Ubuntu.

CDN Staffhttps://channeldailynews.com
For over 25 years, CDN has been the voice of the IT channel community in Canada. Today through our digital magazine, e-mail newsletter, video reports, events and social media platforms, we provide channel partners with the information they need to grow their business.
Previous article
Get ready for the foldable smartphone
Next article
BlackBerry launches new cybersecurity consulting service for people, privacy, assets… and cars