Samsung’s build cost for Galaxy S4 is US$236: iSuppli

According to a virtual teardown conducted by the IHS iSuppli Mobile Handset Cost Model Service, the new Samsung Galaxy S4 has a bill of materials cost of appx. US$236.

That’s up by $31 from Samsung’s last model in the family, the S3, and iSuppli primarily attributes the increase to major upgrades to the display, sensor, application processor and supporting memory. When manufacturing costs of US$8.50 are added, iSuppli puts the cost of the HPSA+ version of the Galaxy S4 at $244.

“Although its hardware is not radically different from the Galaxy S III introduced in April of 2012, the Samsung Galaxy S4 includes some critical component updates that enhance its functionality as well as its BOM cost,” said Vincent Leung, senior analyst for cost benchmarking at HIS, in a statement. “Among the upgrades are a larger, full high-definition display; a beefed-up Samsung processor; and a wealth of new sensors that set a record high for the number of such devices in a smartphone design. And despite the larger display and other changes, the Galaxy S4 has roughly the same width and the same ease of handling as the Galaxy S III.” 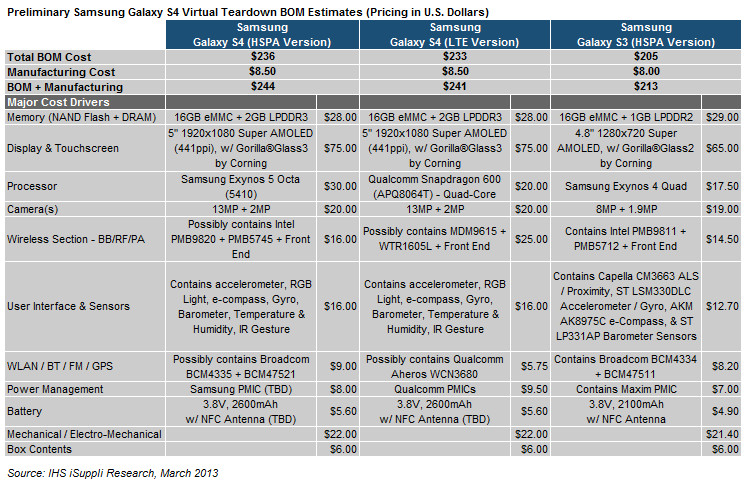 Jeff Jedras
A veteran technology and business journalist, Jeff Jedras began his career in technology journalism in the late 1990s, covering the booming (and later busting) Ottawa technology sector for Silicon Valley North and the Ottawa Business Journal, as well as everything from municipal politics to real estate. He later covered the technology scene in Vancouver before joining IT World Canada in Toronto in 2005, covering enterprise IT for ComputerWorld Canada. He would go on to cover the channel as an assistant editor with CDN. His writing has appeared in the Vancouver Sun, the Ottawa Citizen and a wide range of industry trade publications.
Previous articleGoogle’s Chromebook officially comes to Canada
Next articleMicrosoft taking Surface direct to businesses in UK: report