Samsung isn’t letting Microsoft and Apple have all the fun. With the next Surface Pro and iPad Pro releasing this June, Samsung’s own Galaxy Book is entering the ring. The Galaxy Book is available now in Canada.

The silver colored Galaxy Book comes in two sizes: a 10.6 inch and 12 inch. The smaller screen has a TFT FHD (1920 x 1280) display, while the 12 inch boasts a Super AMOLED FHD (2160 x 1440) display. The larger display is also significantly more powerful with a 7th generation Intel i5 processor and 8 GB of RAM, compared to the 7th generation Intel m3 processor and 4 GB of RAM. 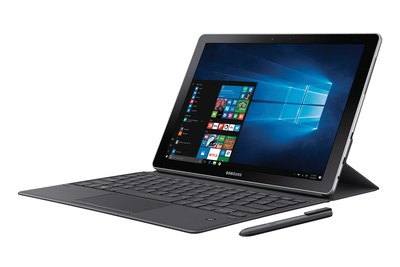 Both models have microSD support for up to 256 GB and 5 MP front facing cameras. The 12 inch also has a 13 MP rear facing camera. Both devices come equipped with fast charging capabilities and USB-C, but the larger model has about two hours more battery at 11 hours and an extra USB-C port.

Samsung is pricing the larger Galaxy Book model at nearly one thousand dollars more than the smaller one, but at first glance, the differences between the two are significant enough to justify it.

Full tech specs for both models can be read below.

Related Stories
LG bringing the stylus back to smartphones
Apps are cool, convenient, useful and dangerous

Alex Radu
is a staff writer for Computer Dealer News. When not writing about the tech industry, you can find him reading, watching TV/movies, or watching the Lakers rebuild with one eye open.
Previous article
Datto focused on helping MSP partners win with SMBs
Next article
Tablet system for healthcare professionals now available