Samsung’s Galaxy Note 4 on its way to Canada

Mark your calendars: Samsung Canada is bringing its Galaxy Note 4 to Canada on Oct. 24.

The smartphone with tablet credentials will also boast an enhanced S Pen that Samsung says will allow users to add emotion, humour, clarity and style to their activities with the device.

Galaxy Note series in 2011, and we remain the industry leader in this category,” said Paul Brannen, executive vice-president, mobile solutions for Samsung Canada, in a statement. “The new Galaxy Note 4 introduces the most refined Note experience to-date by featuring innovative technology including the enhanced S Pen which allows Canadians to add more of themselves to their mobile experience.”

The Galaxy Note 4 is Samsung’s 4th generation Note device, and It features advanced photo technology on both the front and rear camera, battery and charging improvements and a 5.7” Quad HD Super AMOLED display. The phone has a metal frame and soft, textured body.

Samsung is trying to hop on the selfie bandwagon by touting the improved 3.7 megapixel front-facing camera with a 90-degree shooting angle and up to 120-degree wide angle to fit more friends in your selfies; the main camera boasts 16 megapixels. A new Ultra Power Saving Mode maximizes battery life and promises 24 hours of call and text reception on a 10 per cent charge.

The Note 4 is powered by a 2.7GHz Quad-Core Qualcomm processor running Android 4.4 KitKat. It features 3GB RAM and 32GB internal memory and up to a 128GB External SD storage. It will be available in Charcoal Black and Frost White. 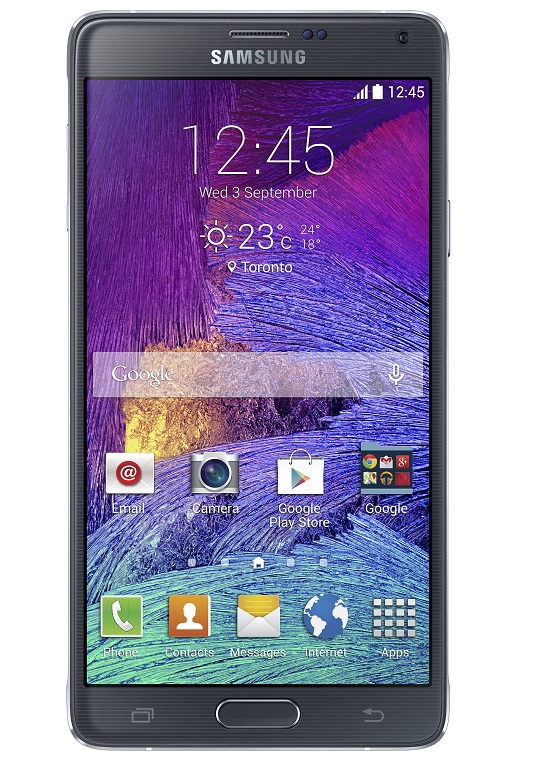