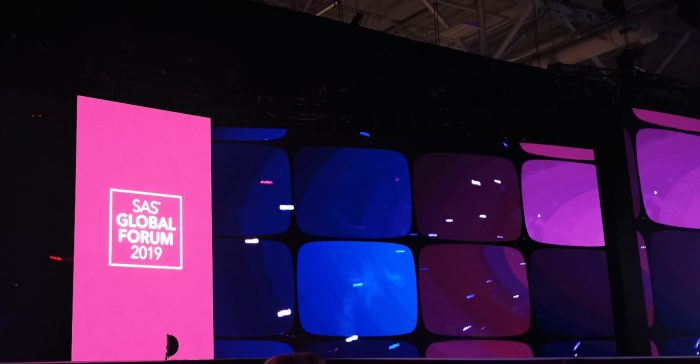 DALLAS, TX – SAS Canada partners had reason to celebrate this week as their successes were lauded at the company’s annual conference, SAS Global Forum.

Gold Partner CT Global Solutions received the 2018 Revenue Growth Award for SAS Canada, quite an accomplishment for a US-based company that currently has only one Canadian employee (although it is planning to expand).

President and chairman Peter Turney, PhD, said that the company, along with a software company called ABC Technologies Inc, a provider of activity-based, business modeling and analysis software that was acquired by SAS in 2002, came to be after he found in his research at the University of Waterloo that manufacturing companies’ cost accounting systems were grossly understating their production costs.

“Their management accounting systems were telling them that a part they were making cost $2.50, and they were selling it for $5.00,” he said. “Our analysis showed that it actually cost $84.00. But what was even worse was that the cost accounting system calculated the cost as $2.5378426, to six significant figures, yet the first digit was wrong, and the decimal point was in the wrong place. So I coded out a whole new field; it was called different things, including activity based costing, or activity based management.”

ABC Technologies developed what Turney said was the world’s first commercially available software tool for analyzing profitability for any sort of company; that tool, Oros, became what is now SAS CPM.

“My company’s DNA is embedded in SAS CPM,” he said. “And in the methodologies that we implement.”

CT Global Solutions became a SAS Partner and reseller in 2002, focusing on profit analytics (analyzing where companies are making/losing money), a financial workbench using SAS Financial Management, and demand planning and decision optimization. It has a partner programs in both the US and Canada and does ad-hoc projects worldwide.

Its Canadian business comes from three areas: the SAS reseller program (SAS deems mid-tier opportunities channel-only), its own sales that it brings in as incremental new revenue for SAS, and teaming with SAS sales on enterprise accounts when they request help. The sole Canadian employee sits in the SAS Canada head office in Toronto, but when CT Global Solutions becomes a taxable Canadian corporation (the plan is for January 2020), it plans more hiring, including a French-speaking employee.

“The opportunity for us is that we sell and deploy primarily three solutions, Cost and Profitability Management, SAS Financial Management, and SAS Demand-driven Planning and Optimization, and it turns out that in Canada those are solutions that are not supported by SAS PSD (Professional Services Division), and there are no partners for these solutions,” Turney said. “So to the extent that SAS Canada would like to have a presence in those three areas, we’re a natural partner for SAS Canada.”

The strategy is that CT Global Solutions will be called in to handle everything from the pre-sales through implementation and support for the three products.

“That is the value proposition for us in Canada,” he said. “There’s clearly a business need for those solutions.” And he sees one of his jobs as moving what are now three niche products to mid-market tools.

Montreal-based Novipro has just signed its first teaming agreement with another Canadian partner, and is in discussions with an overseas partner on a second teaming. The initial teaming is for a single project, and if it’s a success the two companies will expand the partnership as a go-to-market strategy. Since Novipro focuses on Quebec and the other partner is not based in Quebec, they complement each other, and that, said Novipro’s Alain Cormier, executive director of business development, is why the two companies were introduced.

“We’re really excited because it gives us scale in the marketplace, where we have a trusted, well-working relationship and Novipro is now able to address more client needs,” said Doug McLaren, director of alliances and channels at SAS Canada. “That’s exciting for us in terms of adding additional capabilities to what our current model is with our partner.”

And, Cormier added, it gives Novipro access to additional solutions and skills that it can offer to its existing customers.

McLaren said that he’s seeing a lot of partners talking about how to team to extend their reach and capabilities. “It’s a 1 + 1 = 3 mentality,” he said. “Other partners don’t look on each other as competition. They look on teaming as competing against SAS’s competition.”

Facts Consulting, a South African cyber forensic and data analytics specialist, is partnering with SAS Canada to market its SAS based fraud framework solution for procurement integrity, for which it won the SAS Excellence in Innovation award. The solution is now bundled into SAS Procurement Integrity.

More than half of companies in Canada surveyed in the PwC Economic Crime Survey said they’d been economic crime victims in 2018, up from just over a third in 2016, with most crimes committed by insiders or people connected to the organization. Losses were reported at one million US dollars or more.

“With procurement fraud, it’s best to be proactive,” said Yolandé Byrd, director of fraud analytics at Facts Consulting, noting that if news of fraud hits the press, the damage to the victim can be ten times the actual dollar amount. The solution proactively monitors procurement, spend, and identifies waste and abuse. It looks for links between employees and suppliers, using SAS link analysis and network analysis to discover connections that may indicate collusion between the employee and supplier to defraud the company.

The product is available for on-prem installations, and SAS Canada is also talking to partners across Canada, such as KPMG, Accenture, Deloitte, and PwC, about providing the solution as a service to smaller customers. SAS offers a proof of concept where it runs the solution on a year’s historical ERP data to show the prospect what anomalies reside in its procurement system.

Lynn Greiner
Lynn Greiner has been interpreting tech for businesses for over 20 years and has worked in the industry as well as writing about it, giving her a unique perspective into the issues companies face. She has both IT credentials and a business degree
Previous articleIDC talks 5G Canadian network plans and consumer use cases
Next articleVMware and Microsoft tying the knot the biggest announcement in two years, says Softchoice