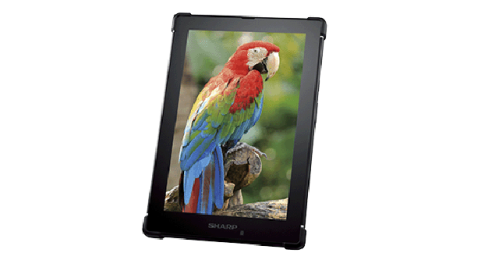 According to Sharp (OTCMKTS: SHCAY), which also happens to be a market leader in LCD, a wider range of colours can be displayed on the micro-electro-mechanical system (MEMS) display that it is working on with for the last three years with Pixtronix a display technology firm that is a subsidiary semiconductor company Qualcomm (NASDAQ: QCOM)..

Sharp said it is scheduled to release by the first half of 2015 is first MEMs-IGZO (indium gallium zinc oxide) seven-inch tablet, for the business market. The device will have a Qualcomm Snapdragon 800 processor and will run on Android 4.4 Kit Kat operating system. It will also have a high-speed long term evolution (LTE modem and a1280x800 MEMS-IGZO display.

While LCD screens are able to reproduce up to 90 per cent of the range of colours defined by National Television System Committee (NTSC) television colour standard, MEMS screens is able to reproduce about 10 per cent more, Akira Imai, general manager of development and strategy at Sharp’s display device development division, told Computerworld.com.

With LCD screens, each pixel is divided into red, green and blue subpixels with filters. Electric current applied to liquid crystals in front of a filter allows or blocks transmission of light of that colour.

By contrast, MEMS screens do not have red, green or blue subpixels, Electro-mechanical shutter either allow or block light through each pixel. The shutters that open and shut in 100 microsecond intervals are synched with backlighting that cycles through red, green and blue provide the to allow light from the appropriate colour.

IGZO is being positioned as a potential replacement to current low temperature poly silicon (LTPS) LCD displays, according to AndroidAuthority.com. It is an active matrix LCDD display that is faster and more integrated than screens composed of silicon substrates. It also allows electrons to flow 100 times faster than they do through grains of amorphous silicon (a-Si).

IGZO costs less to produce that LCDs and also have a low off current.

The Future Looks podcast: the future of communication