SMBs have older PCs; channel can help with upgrades: Intel

A new study sponsored by Intel Corp. is highlighting the productivity costs small businesses are facing due to using hardware that tends to be older than that used in the enterprise, and the opportunities available to the channel around bringing small business clients onto newer hardware.

The Intel Small Business Refresh Study surveyed 736 small businesses on the state of their IT equipment, and found 36 per cent of them own PCs that are more than four years old. According to Intel, older machines require more maintenance, and with higher equipment costs and lost employee productivity, purchasing a new machine can often be more cost effective.

“Upgrading to new PCs is one of the wisest choices a small business can make,” said Rick Echevarria, vice-president of PC Client Group and general manager of Business Client Platform Division at Intel, in a statement. “PCs are largely considered the foundation for many of these companies, and this study makes a clear cut case for refreshing them on a regular basis.”

According to the study, on average, employees lose more than 21 hours a year using a PC that is four years or older, due to repair time, maintenance and security issues. It also found SMbs are spending an average of $427 to repair a four year old or older PC. A four year old PC is likely also running Windows XP, which raises security issues when Microsoft ends support for the OS next year.

Partners can have a conversation with clients running older machines, and encourage them to consider the cost of maintaining older PCs, including both the visible and hidden costs, and if an upgrade makes sense for them. 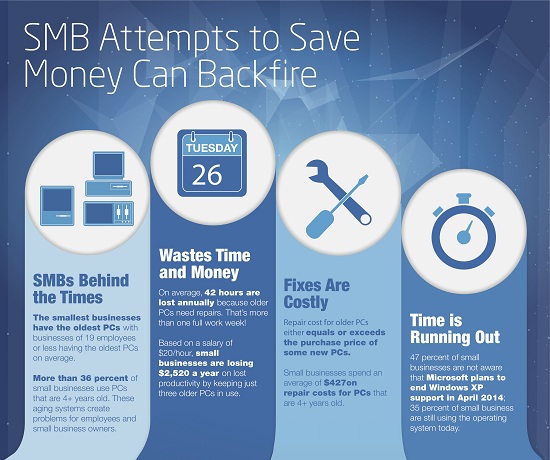 Jeff Jedras
A veteran technology and business journalist, Jeff Jedras began his career in technology journalism in the late 1990s, covering the booming (and later busting) Ottawa technology sector for Silicon Valley North and the Ottawa Business Journal, as well as everything from municipal politics to real estate. He later covered the technology scene in Vancouver before joining IT World Canada in Toronto in 2005, covering enterprise IT for ComputerWorld Canada. He would go on to cover the channel as an assistant editor with CDN. His writing has appeared in the Vancouver Sun, the Ottawa Citizen and a wide range of industry trade publications.
Previous article
Gaming for profits
Next article
Chromebooks for business? Vendors say yes, but barriers remain