STATE OF THE CHANNEL: Evaluating vendors? You need to be hands on

Call it a surprise. Call it the channel being conservative, again. But the old hands-on product demo is what at least half of the solution providers surveyed in the first annual State of the Canadian Channel indicated was the best method of choosing a vendor partner to deal with.

More than 45 per cent of the respondents picked hands-on product demos or briefings on services as the top method for choosing a vendor partner. A close second was product reviews at 43 per cent, followed up by customer requests at 42 per cent.

Other methods such as word of mouth, reputation, marketing, media and partner profitability did not score as high in the CDN poll.

Read more: STATE OF THE CHANNEL: New revenue and new clients are priorities for 2012

According to the report, media coverage does put vendors on the radar screen for solution providers, but it will take a lot more than that to strike a partnership.
Ingram Micro’s vice-president and general manager for Canada, Mark Snider, was also surprised at this result, saying that for his team, they work on aligning with vendors and sharing priorities.

“We want to grow in the mobility area, for example, and we can get into different areas with current vendors to develop mobility practices in hardware and software. We need to get deep with vendors because there are new vendors in this area,” he said.

Snider went on to say that having strategic priorities with the vendor partners helps solution providers from spreading themselves too thin. An example of that was when Ingram Canada launched a new physical security division late in 2011. When creating this new division, the distributor knew it would be a new skill set for the channel and brought in a select number of best in class vendors, but they also made education a priority and trained inside sales reps as well as solution providers in identifying key components and structures for making physical security a core part of the value add to customers.

Training was another top factor for solution providers when choosing the right vendor partner to deal with, according to the findings from the State of the Canadian Channel report. 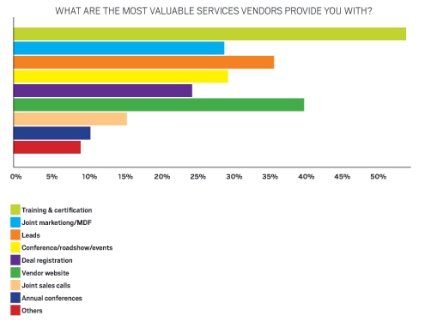 The survey respondents overwhelmingly chose training and certification as the most valuable service vendors provide for solution providers.

Related graphic: STATE OF THE CHANNEL: Partner priorities and revenue streams for 2012

More than 50 per cent of those surveyed selected training and certification. A whopping 73 per cent of solution providers preferred online training over classroom instruction. They said it saves time and provides a better balance for their workers.

Coming in second was the vendor Web site or partner portal at just over 40 per cent followed by leads at 36 per cent. While leads were important in choosing a vendor, it also was an area that vendors really needed to improve upon. More than 46 per cent of solution providers in Canada said leads are the No. 1 area vendors must improve for 2012.

Other areas of improvement solution providers want to see from vendors are a streamlined rebate system or discount process (44 per cent) and telesales support (36 per cent).

Snider said that vendor channel programs need to deliver return on investment for the solution providers. He is seeing that more vendor programs are addressing the smaller solution provider instead of being broad based. Ingram Canada has invested in its database to show resellers potential upgrade opportunities.

For example, if there is a big server upgrade program, Ingram Canada’s database is sophisticated enough to provide solution provider case study examples on power supply sales opportunities for the servers.

“The returns from this are net 30 points instead of the five per cent you would get on the server. After that happens, you don’t want to spend your money on two to three point sales,” Snider added.