Symantec Corp.’s channel partners can expect to be more involved in selling the security vendor’s products to all segments starting Canada Day, according to company executives.

Following the 24-month plan that new CEO Steve Bennett laid out for the first time in January, the channel will be a key piece of Symantec’s go-to-market strategy that will kick into gear beginning July 1. Having newly gripped the company’s helm just last year, Bennett hasn’t been shy about plainly stating the company’s short-comings. In his view, the company was poorly managed under his predecessor Enrique Salem, and he repeated that in his opening keynote at Symantec Vision in Las Vegas on Tuesday.

“We lack the strategy and the operational plan to deliver value for our customers and partners,” he says. “Our strategy for growth was acquisition and we bough some great companies, but we didn’t integrate the companies.”
Symantec 4.0 is all about integration and convergence of the vendor’s dizzying array of products. The engineering team has been reorganized into one unified division of the firm, the product lineup will be reduced to fewer SKUs by integrating several products into one solution (for example, Mobile Workforce Productivity will include endpoint protection, mobile application management, endpoint encryption, endpoint data-loss prevention, etc.), and a simplified go-to-market strategy. 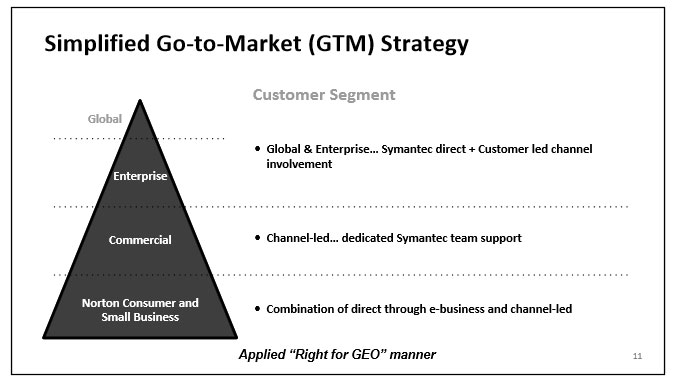 A chart from Symantec CEO Steve Bennett’s Symantec 4.0 strategy presentation.
Channel players don’t have too many details about how the reorganization will change how they work with Symantec. But they do know the vendor is investing more into that relationship, to the tune of $50 million towards support, plus another $3.5 million on its inside sales organization designed to pass leads on to partners. That will translate to a bigger role for partners in Canada too, says Sean Forkan, general manager of Canada for Symantec.
“We’re still in the planning phases on the corporate level on how we’re going to make it easier for partners to work with us,” he says in an interview. “The good news for Canada are the systems and vision I established are very similar to the Symantec 4.0 model.”
Forkan says he worked with one partner specifically on a pilot project in Canada last year that tested some new approaches for Symantec. It involved solving “bigger, more important problems” for customers and using Symantec as a part of a multi-vendor architecture.
That’s in line with the big pictures strategy for Symantec, according to Chris O’Connor, senior consulting analyst at Info-Tech Research Group. Converging products to present solutions to company IT departments will require communication efforts on Symantec’s part with the channel. Sales efforts on what used to be two products, sold to two different managers at a company, may now have to be sold as one solution to one of those managers, he gives as an example.
“Symantec has changed to process to effect a change in technology,” he says.
Related Story
Symantec addressing the BYOD mobility argument
But channel partners shouldn’t worry about Symantec abandoning its old way of doing business too quickly, O’Connor adds. Symantec will continue to support the old way of doing business for the time being.
That sentiment was echoed by Bennett on stage during his keynote.
“We’re driving ahead slowly, consistently,” he says. “What happens when you do that is the fog lifts and the sunlight comes through. We’re going to evolve at a pace that minimizes disruption for our partners and our employees.”
Come July 1, Symantec’s channel partners will be looking for that crack of sunlight on the horizon.