The cloud tipping point in Canada has arrived: Microsoft

HOUSTON – Executives from Microsoft’s North of the border subsidiary say that, when it comes to cloud computing, the tipping point in Canada has arrived.

It’s no coincidence that cloud computing was a central theme of the vendor’s Worldwide Partner Conference this week. Cloud is behind Microsoft’s desire to shift from a software company to one focused on devices and services.It sees those devices as a cloud-on ramp, and the cloud as the way to deliver applications and services to millions of connected devices. Microsoft’s partner program will be revamped by the next calendar year to bake cloud requirements into every competency, and partners will be incented to make cloud part of every deal.

The cloud theme was continued in the Canadian regional keynote on Thursday by Microsoft Canada president Max Long and his team, who pointed to the growth of Microsoft Azure and some key recent wins for Office 365 as evidence of growing Canadian cloud momentum.

“This last year we’ve won banks, huge retail manufacturers; you name it, we’ve won in those companies. The tide has turned in Canada for public cloud,” Long told partners. “And with SMBs, the opportunity is enormous. They want the capability of a large enterprise but they don’t have the funding. The cloud provides it. Now is the time for partners to invest.”

One data point on the turning tide comes from the public sector. Mike Tremblay, Microsoft Canada’s vice-president for public sector, said Office 365 and hosted Exchange 3013 is gaining traction in the education space, with the federal government through an e-mail deal won by Bell and CGI with Shared Services Canada, and a deal for 70,000 Office 365 seats just closed with Alberta Health Services, through Edmonton solution provider Acrodex.

“It’s just an outstanding beachhead deal that we can cascade and tell that story from coast to coast,” said Tremblay. “The trigger was last year they had a fire in their data centre and had no backup; it brought them to their knees with no e-mail or anything for three days.”

According to Greg Lardner, national channel sales director for Microsoft Canada, the cloud market in Canada is expected to grow by 28 per cent this year. The expectation is cloud growth will continue to out grow on-premises (which should grow by three per cent) until the cloud dominates. In fiscal 2013, 875 partners in Canada were selling Office 365, the number of seats sold grew by 115 per cent, and 217 new cloud partners came on board.

Every Microsoft partner will need cloud competencies next year

Moving customers off of Windows XP, which will be end of support in April, will also be a priority for Microsoft Canada and its partners in fiscal 2014.

While Canadian partners are being encouraged to invest in the cloud, they’ll also find it easier to interact with Microsoft. While the vendor previously interfaced with partners with separate channel teams through each of its primary go to market business units – small to midmarket solutions and partners (SMS&P) and enterprise – the channel organization in Canada has now been unified into one group.

“We had two partner teams in our space and it was not aligning with you,” said Lardner. “You weren’t honouring our divisions, nor should you. We’re now capturing more data from inception to lead generation through the sales cycle to deployment so we can bring better insight back to you as a community.”

Canadian partners got to meet Microsoft Canada’s new vice-president of SMS&P, Dennis Cerasoli, who comes to the subsidiary from Michigan, where he held several regional leadership roles with Microsoft in the U.S. 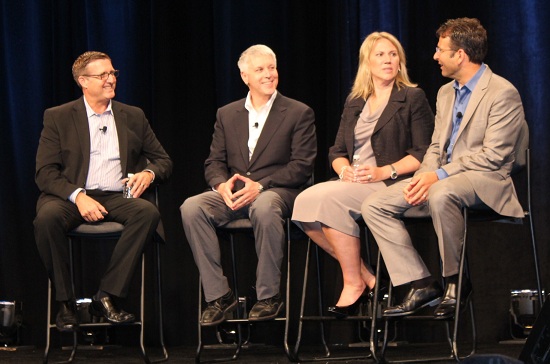 “I bring energy and a refuse to lose approach to Canada,” said Cerasoli. “You can count on me to be hand in hand with you as we move to a services-led business driven by devices.”

His counterpart as vice-president of enterprise sales for Microsoft Canada, Staci Trackey Meagher, pointed partners to opportunities in bring your own device (BYOD), which SMBs are embracing but enterprises will need some hand-holding from partners to help address their security concerns. She also pointed to the data centre with Microsoft System Centre and Hyper-V as well as Azure, reporting impressive share gains from rivals such as VMware. Canada also led the world in CRM deployments, is the top region for Dynamics AX growth, and just closed the largest Dynamics AX deal globally.

Finally, the Canadian keynote got a visit from Judson Althoff, who recently came over from a senior channel role at Oracle to become president of Microsoft North America. Althoff encouraged partners to take a portfolio and solution-based approach to selling, and to lead by telling a user experience story.

“We need to all become portfolio sellers, which is a fancy way of saying solution sellers,” said Althoff. “If you sell the portfolio by telling first-person experiences that put us into a category of one you will always win the hearts and minds of the business decision makers in our customers.”