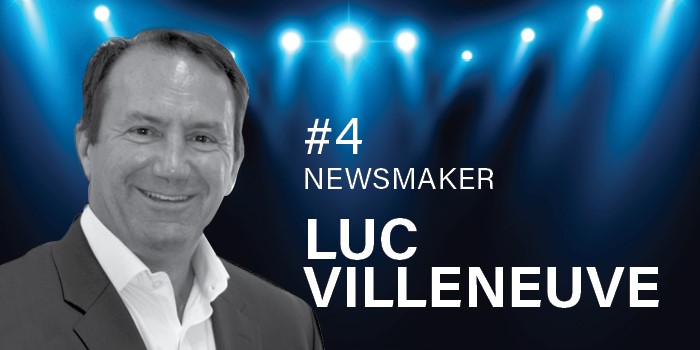 Luc Villeneuve is number 4 on our 2019 Top 25 Newsmakers. Click here to view our other winners.

It would be an understatement to describe 2018 as a busy year for Luc Villeneuve.

Red Hat Canada’s former country leader and general manager did his part to help the 25-year-old leading Linux services company reach nearly $3 billion in total revenue – it took Red Hat 19 years to hit $1 billion – while rolling out a new and exclusive partner program initiative in Canada and participating in important conversations about inclusivity in the channel.

Then, of course, there was that bombshell announcement about Villeneuve’s departure from the Red Hat business in December. News quickly followed that the channel vet had set his sights on growing the Benchmark Corp. business, a Canadian IT solutions provider located a short drive from Toronto. And with the ambitious goals he’s set for himself in his new role as president, it’s no wonder Villeneuve made our top five.

“If everything was rosy and perfect, and [Benchmark] was generating all sorts of revenue, I probably wouldn’t go,” Villeneuve told CDN after he announced his new role at the company. “But I see where we can take it.”

Benchmark’s new president wants to lift the business out of the shadows and pivot to a value-added software reseller focusing on open source solutions and customer relationships.

As the former leader of Red Hat’s Canadian business, Villeneuve said he saw first-hand the increasing demands from both customers and channel partners, both of which are trying to figure out the best way to keep up with the rapid pace of innovation and use those emerging technologies to solve the growing business challenges across the country. In Canada, the typical value added reseller (VAR) is working to boost the actual “value” portion of their business in order to stand out from the competition, something only a few VARs have successfully managed to accomplish, according to Villeneuve.

“To me, the V has been diminished over the years,” he said. “Most customers today are trying to solve problems with software. But if you look at the VAR marketplace, it’s heavy on hardware, and most of the vendors are selling hardware upgrades. The VAR community has reinvented themselves with managed services, security, and multiple cloud offerings… but there is a lack of software right now.”

Villeneuve is hiring account managers across Canada who will be tasked with reconnecting with contacts and outlining Benchmark’s strategic focus as a software-focused VAR. It doesn’t mean they’re ignoring the hardware and on-premises infrastructure that still play a role in the IT landscape, he said, but it’s clear there is room for a business like Benchmark to step in and help fill some of the gaps when it comes to value-added software solutions that lean heavily on the open source ecosystem. He’s also representing the VAR on the Canadian Channel Chiefs Council board, continuing his work with the not-for-profit organization that’s tasked with growing and standardizing channel leadership in Canada.

“You’re not going to go open source all the way, I understand that, but there are key ways for a business to introduce those components and reduce costs.”

Villeneuve said he’s already established a 12-person team, but so far, has only publicly introduced three of them: Mario Campagnolo, Peter Goloubef, and Jae Cripps.

Finding the right talent coast to coast has been a bit of challenge, he admitted, especially when it comes to hiring women.

“The GTA (Greater Toronto Area) has been tough. I’ve asked a headhunter to help me find women in the area for these roles but it’s been next to impossible.”

But despite these challenges, Villeneuve is confident 2019 will be a year of success, and it will be worth following Benchmark’s progress as it aims for new heights in the channel partner community.

Rogers and Shaw agree to sell Freedom Mobile to Quebecor