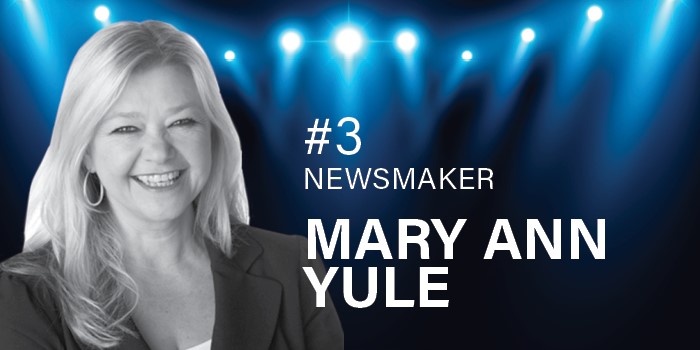 Mary Ann Yule is number 3 on CDN’s 2019 Top 25 Newsmakers. Check out our other winners here.

When the words “PCs” and “printers” are mentioned, HP likely comes to mind, and when HP comes to mind, it’s impossible not to associate it with Mary Ann Yule.

The president and CEO of HP’s Canadian business made multiple appearances in the Globe and Mail last year, navigating topics like security and gig economies, and took centre stage at several major events across North America – including our own. And there was a reason people tuned in. It’s been three years since HP split from Hewlett-Packard Enterprise, and in addition to maintaining the brand’s integrity, last year Yule ushered in innovative products and services while helping business partners get their hands on 3D printing faster, and ultimately, into the hands of eager customers who are constantly coming up with new ways to take advantage of the emerging technology.

“We already have partners lined up in manufacturing and auto manufacturing,” she said, listing off a number of companies such as BMW and Volkswagen, as well as businesses in the footwear industry.

IDC says global spending on 3D printing (including hardware, materials, software, and services) will be $13.8 billion in 2019, an increase of 21.2 per cent over 2018. By 2022, worldwide spending will reach $22.7 billion, which is good news for the channel partners HP relies on for more than 85 per cent of its total revenue.

And while the topic of managed print services doesn’t deliver the wow-factor 3D printing does, it’s a growing space that has trickled down to the SMB market, resulting in projections that suggest the combined worldwide managed print and devices services and basic print services market will grow to $47.9 billion in 2021 at a compound annual growth rate (CAGR) of 5.8 per cent.

Hoping to take advantage of this growth, Yule introduced changes to its Partner Managed Print Services and launched pMPS 2.0 in September last year. In the first quarter alone, HP Canada managed to double the total contract value of new deals.

“We had partners that were engaged with the program, but we thought ‘How can we make it better for our channel in Canada?’” said Yule, adding it was important the program delivered as many opportunities as possible for partners in a country where the market is dominated by small businesses.

Carrying the security conversation over to its printing business will continue in 2019, as attackers become better at penetrating the increasing number of connected devices organizations turn online, which, of course, includes printers. HP’s announcements around laptops in 2018 didn’t really cause jaws to drop, but that’s mostly because what was announced continued the trend of powerful laptops at affordable prices. HP’s latest Envy lineup is looking to maintain its reputation of delivering affordable, reliable machines, while the 34-inch curved EliteOne 1000 AiO will continue to find an audience in the collaboration and video conferencing spaces.

Yule has also played a big part in making HP Canada one of the best places to work in the GTA. The company was one of Canada’s Best Diversity Employers in Canada, as well as Canada’s Most Sustainable Tech Company

The projected growth in the 3D printing and managed print services spaces, combined with another compelling lineup of laptops and other devices, will most likely equate to another solid year for HP Canada and its charismatic leader.