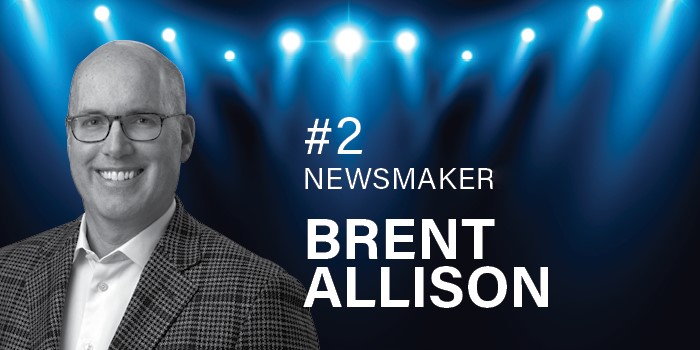 Brent Allison is number 2 on CDN’s 2019 Top 25 Newsmakers. Check out our other winners here.

That’s not to say that Allison isn’t worth toasting.

“He’s created a lot of momentum,” MacDonald said. “Our growth was about 19 per cent last year.”

And it’s not that Long View doesn’t celebrate its 1,150 employees. In fact, it just celebrated the firms’ 20th anniversary, and champagne was poured for the four people that have been there since the beginning. One of those people is Don Bialik, the founder and CEO until Allison took over the role at the beginning of 2018. It was Bialik who started Long View with the goal not of being acquired in a multi-million dollar transaction, or hitting a big IPO, but of creating a company that would last a century. A place where employees would work for their entire careers without regrets.

Now Allison, an outsider who’d previously been the senior vice-president of business futures at Telus Corp., would be taking over as CEO.

The questions around a brand new leader

“When a new leader was coming in place, there was some angst honestly,” recalls MacDonald. Certain questions were on the minds of Long View employees – “How long will it take for Brent to come into the culture and understand it? Will he do anything to drastically change the culture?”

As described by MacDonald, Long View’s culture is one of compassion and integrity. People are helpful and kind to each other. Fortunately, Allison clicked with the culture and those questions were assuaged. One of the first things Allison said to the company is that if he runs into a Long View employee on the street, he’d hope that they would feel like running across that street to give him a hug rather than crossing the street to get away from him.

“He’s fit right in,” MacDonald said. “Just last week people came up to me and said how pumped they were that he understands the culture.”

Long View’s success in 2018 is a testament to that, as it was given top accolades by multiple vendors. In June, it was named Microsoft’s Partner of the Year for 2018, ranked as the fastest growing Canadian licensing service provider with 36 per cent year-over-year growth and ranked number one for cloud service provider market share in Canada.

Long View has always been a Microsoft partner, MacDonald says. The vendor makes sense for Long View’s mid-size enterprise clients that run Microsoft shops and are familiar with the software, able to journey into the cloud world on Azure and Office 365. Inspired by Microsoft CEO Satya Nadella’s commitment to helping customers succeed in digital transformation, it set a goal three years ago to be named the Canadian Partner of the Year. So winning it was another cause for celebration.

“That’s when we really did drink champagne,” he says.

The solutions provider also received top billing from Citrix, winning its 2018 Canadian Partner of the Year award for driving net new opportunities and sales. One of Long View’s specialties has been implementing Citrix on Azure, MacDonald says, and the company has a long technical history of working with the platform. The vendor is important to Long View’s OneCloud solution, which helps clients manage their storage in a hybrid cloud model. For those workloads that just don’t migrate to the cloud, NetApp can provision local resources.

Finally, it was named one of Canada’s Best Managed companies, a platinum member of the Deloitte program for seven years running. MacDonald says the time to go through the audit and review required for the program is worthwhile because Deloitte provides guidance and feedback, and a benchmark against other top firms in Canada.

Allison’s story as a top 25 newsmaker isn’t one of a turnaround, where he came into an organization and found success against the odds. Rather, it’s one where he nimbly grasped the baton passed to him by Bialik and kept running just as fast.

If Allison and the rest of Long View can do that for another 80 years to meet Bialik’s 100-year goal, it’d be worth a toast. With real champagne for this one.