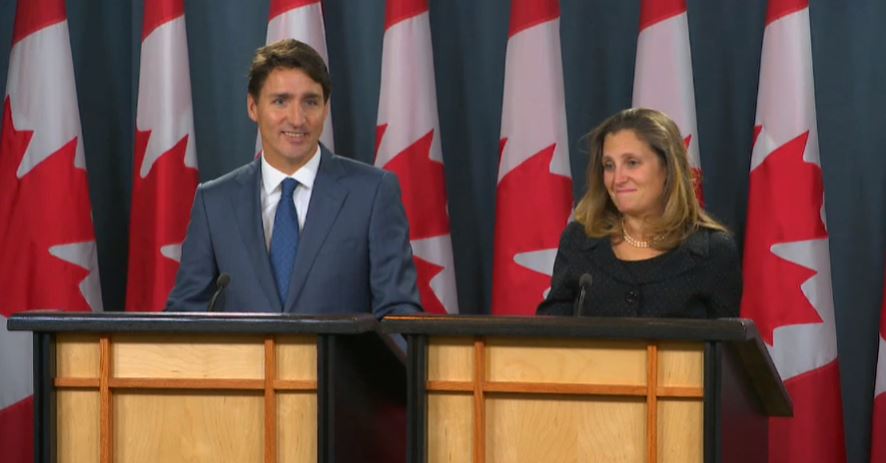 Media reported on Monday about how the USMCA agreement is likely to impact the tech sector. We’re rounding up the broad strokes here.

Canada agreed to extend copyright from 50 years after the work’s creator to 70 years. Since American firms tend to own more intellectual property than Canadian firms, this could hinder some development opportunities around technology. In a statement to The Logic, Innovation Minister Navdeep Bains emphasized the importance of Canada becoming “a leader in generating and leveraging intellectual property,” and highlighted the government’s national IP strategy. “The IP chapter [of USMCA] will support the competitiveness of our creators and innovators, while providing Canadian exporters and investors with a predictable and transparent framework of rules.”

A Globe and Mail article outlines how online shoppers that are getting products shipped from the U.S. will see some lower costs thanks to an increased “de minimis” threshold. This is the amount that can be imported to Canada without having to pay duties or taxes. The threshold is going up from $20 to $150, which includes $40 for sales taxes. Online marketplaces like eBay and Amazon have been campaigning for this threshold to be raised, though they’d like it to be even higher – as the U.S. threshold for goods from Canada is $800.

The Globe article provides this example: “For example, an Ontario shopper buying a pair of C$100 China-made cotton pants from a U.S. online retailer would pay a total of C$113 under the new United States-Mexico-Canada Agreement (USMCA) – including $13 in tax – while under the North American free-trade agreement (NAFTA), the consumer would pay C$132.21 in all, including C$17 in duties and a C$15.21 tax.”

The new threshold only applies to goods being shipped by couriers, not those shipped by Canada Post. So keep that in mind when you select your shipping options.

The digital trade section of the agreement – chapter 19 – limits requirements placed by the government on where data is stored or transferred. The federal government can’t require that data centers be located in Canada in order to conduct business in the country.

Over the past two years, many hyperscale cloud providers have created a Canadian region with data centres either in Toronto or Montreal in order to work with Canadian firms. Services such as Amazon Web Services, Microsoft Azure, Gloogle Cloud, and IBM Cloud are already established in Canada. But this provision could affect vendor’s policies on how they manage backups of customer data.

The agreement also says that the cross-border transfer of information shouldn’t be restricted, including personal information. However, there is wiggle room to create restrictions that could “achieve a public policy objective.”

Also in chapter 19, the governments agree to “adopt or maintain a legal framework that provides for the protection of the personal information of the users of digital trade.” This framework must take into account the guidelines of relevant international bodies, specifically naming the APEC Privacy Framework and the OECD Recommendation of the Council concerning guidelines governing the Protection of Privacy and Transborder Flows of Personal Data.

Some key principles on privacy are mentioned, including the limitation on collection and use of personal information. Users should be provided with a choice, and transparency of what they’re agreeing to. This language may influence the upcoming review of PIPEDA, Canada’s privacy law that covers the private sector.

Further, there’s an agreement to “adopt or maintain measures for the limitation of unsolicited commercial electronic communications.” Users must be able to stop unsolicited messages from coming to them or receive consent from users to receive messages.

The language here suggests that U.S. firms will have to respect Canada’s Anti-Spam Legislation, which requires at least implied consent from consumers (which can include a business relationship) before sending any electronic messages.

Opportunities for solution providers as Canadian government eyes blockchain and looks to...