Xerox Corp.‘s ongoing reinvention of itself continued last week at its briefing centre in New York, where the 100-plus-year-old company spent an entire day talking about apps for its multifunction devices, or a “blueprint” for success, as Pete Peterson puts it.

“Our devices aren’t just printers sitting a corner, they’re devices that are actually involved in the overall workflow of a business and making it better, whether that’s a classroom, a small or medium-sized business, it’s part of the network,” the president of Xerox channels told CDN.

After launching its ConnectKey-enabled devices last year, which turns its VersaLink (for small work groups) and AltaLink (for large work groups) devices into workplace assistants, apps have dominated the conversation at Xerox. More than 400 partners have gone through the training necessary to get them certified to build, acquire and sell apps on the ConnectKey platform. Peterson didn’t have a specific number, but said he was certain a “big chunk” of those partners are from Canada. And with ConnectKey doing its best to attract small-to-medium-sized businesses, it makes sense that it’s selling well in country where SMBs account for more than 90 per cent of employment in seven industries, he added. And when it comes to sheer volume, the SMB market delivers excellent numbers, according to Elizabeth Fox, vice-president of managed print services offering development.

More recently, Xerox announced new business apps to the ConnectKey-enabled lineup, including the Xerox Connect App for Salesforce, which provides users with access to the Salesforce CRM directly from a device. Apps that connect to QuickBooks Online and Concur are also planned for a release later this year or early 2019. Certain apps already include integration with Dropbox, Google Drive, and Office 365.

Xerox is banking on the apps extravaganza to help it distance itself from a drama-filled summer that included a failed blockbuster deal with Fujifilm and job losses.

“You’ve seen that with companies that are trying to reinvent themselves, and that’s what Xerox is trying to do – it’s tough,” said Peterson.

Not about selling boxes anymore

For years, Xerox and its partners have built their business by selling boxes, but Peter Munday, global experiential solutions marketing for Xerox, said Xerox has invested a significant amount of dollars into training its sales teams to look at value propositions differently.

“They don’t need to be experts at solving a specific business problem, but they do have to become information gatherers,” Munday explained during the solutions briefing.

No longer can a salesperson approach a potential sale by touting technical specs and a bevy of portfolios, said Munday. They have to gain an understanding of how a business operates, isolate problems and suggest real alternatives that not only simplify workflow but also help the customer save money. A lot of these alternatives are now coming in the form of apps that apply to sales, accounting and HR departments. They can now be accessed through a Xerox App Gallery. Some less-business focused apps are also in the works, like an app that lets you order food.

Xerox updated its online partner portal earlier this summer to help advertise these solutions. In addition to several turn-key resources such as HTML emails and newsletters, videos and infographics, the marketing toolkit also includes curated and drafted social media posts that partners can share on Twitter, Facebook and LinkedIn. 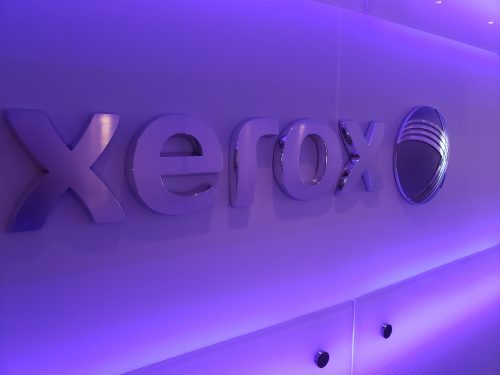 During a panel, Joshua Justice, president of Xerox’s first certified Personalized Application Building Authorized Developer in the U.S., JustTech, said apps are their main focus now. It’s at the forefront of everything they’re trying to sell.

“Our website has undergone a redesign … all of our product pages have the apps that are most popular with that product,” said Justice. “We try to add in apps to everything, and our clients are now very familiar with this and want to see more. Our sales force is trained to show clients what else is out there when it comes to apps.”

Some of their most popular apps include Cloud Fax Connector, which simplifies virtual faxing and the Email Connect app, an easier way to get scanned documents into an email. There are approximately 20,000 JustTech apps installed on Xerox multifunction printers around the world, according to Xerox.

Xerox is number one in the United States and Canada for total shipment value share, says the latest market shares report from the International Data Corporation (IDC). Xerox’s Mike Feldman, executive vice-president and president of North America operations, pointed to this figure during a brief appearance at the solutions briefing where he expressed his confidence in the brand moving forward. He compared the evolution of Xerox to the evolution of the cell phone.

“It does so much more now, and it almost ties into everything I do,” he said.

Xerox announces new cloud offerings, will be available for channel in Q2

Microsoft responds to Internal Use Rights removal: we can’t afford it