Past, present and future Smartwatches
Recently Apple CEO Tim Cook hinted that there might be a smartwatch down the road from the Cupertino, Calif.-based vendor. This got plenty of people and Dick Tracy fans excited over the possibility of communication with others by talking into your wrist; just like those U.S. Secret Service Agents.

Cook said at the All Things D Conference that the problem with smartwatches or any other type of wearable computer is that people need to wear them for the product to be successful.

Case in point when Microsoft back in 2004 launched smartwatches with watch-making partners Suunto and Fossil. They were not successful and were off the market within a few years.
In 2009, LG Electronics stunned CES with the world’s first 3G touch watch phone called the LG-GD910. The LG watch phone featured a tempered glass face. The Bluetooth enabled watch phone gave users two hours of talk time that made you look like comic book hero Dick Tracy. And, it is water resistant. The watch came with three mechanical keys that helped you use the phone and PDA features and those keys look similar to regular watch dials and keys.
But, since that big splash from LG; not much has happened in the smartwatch market not counting Pebble and Sony. Until Cook’s comments which sparked speculation that not just Apple, but Samsung, Google, and LG again and even Microsoft might come out with a smartwatch soon.
So CDN has compiled a list of some of the smartwatches of the past, present and future in this slideshow. 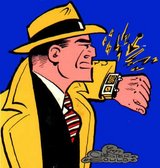 Microsoft’s Smart Watch
Move over Rolex, Timex and for that matter Palm was the marketing cry back in 2004 as Microsoft released its much anticipated Smart Watch.
Microsoft Smart Watches, made by Suunto and Fossil for use with MSN Direct (www.msndirect.com), were finally available to Canadians.
Besides giving the time and date, the Smart Watch through its own FM band delivered news, weather, calendar appointments, text messages, and up-to-date stock quote information. The watch is also smart enough to change the clock depending on what time zone you are in.
Microsoft Canada was looking for, at the time, for more content providers for the MSN Direct service. The service was only available in Calgary, Edmonton, Hamilton, Ont., Kitchener, Ont., London, Ont., Montreal, Ottawa, Quebec City, Toronto, Vancouver and Victoria, B.C., which was part of the problem.
Aaron Woodman, group program manager for Microsoft consumer strategy, said the company tried to work with the CBC and Rogers Communications to provide more local content to the device, but that never materialized.
The Smart Watches retailed for between $199 and $399, and the MSN Direct service is $14.99 a month or $99 for a year. This proved too costly for most people. Major mass merchants such as Future Shop, Best Buy and London Drugs started selling these devices, but soon stopped. Rumours are swirling that Microsoft might make another smartwatch to compete with Apple’s iWatch. [caption id="attachment_27449" align="aligncenter" width="442"] 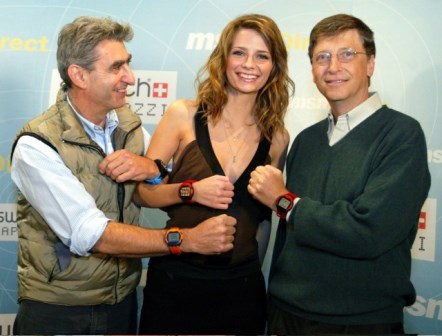 
LG’s Watch Phone
LG Electronics unveiled the world’s first 3G touch watch phone called the LG-GD910 at CES 2009.
The watch looked great with a tempered glass face but it was too big and bulky at 61 x 39 x 13.9mm and 84g in weight.
The Bluetooth enabled watch phone ran for only two hours of talk time. It was water resistant and had three mechanical keys to help you use the phone and PDA features. Those keys look similar to regular watch dials and keys.
These three keys are the same kinds of keys from any other smart phone on the market. The top key is end call, the middle is cancel or return and the bottom key is the receive or talk function. If you hold down the middle key it activates the voice recognition functions. Say music and it plays music. Say call and the number and the watch phone dials it for you.
There is a tiny camera on the top right hand side for video telephony calls with picture and picture capability.
There is a status page that shows a user the battery life, inbox, strength of signal and you can make a call by using your finger.
LG says that users will put on the Bluetooth headset for the calling and music functions on this watch phone, but you are not forced to use it.
As for the watch itself it came with a standard clock face or digital number face.
Click here to watch the video of the LG Watch Phone. 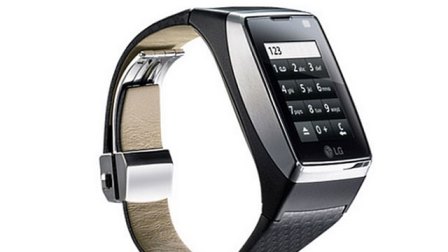 Pebble Technology released its smartwatch earlier this year thanks to the help of the crowd funding community via Kickstarter.
The company almost made history by becoming the second most highly crowd-funded product with more than $10 million raised. Just like LG they launched at CES 2013 with the promise of steady sales. And, for the most part Pebble has done that totalling just a tad over 85,000 products sold. Pebble Technology has also been vigilant in supporting the product with constant updates.
The problem Pebble has, as will the others on this list, is that the smartwatch is an add-on product. At $150 a pop, people will have to ponder where it’s worth having a watch or a smartphone that does the same thing. And, let’s not forget that smartwatches are cool but there no bling match for Rolex. 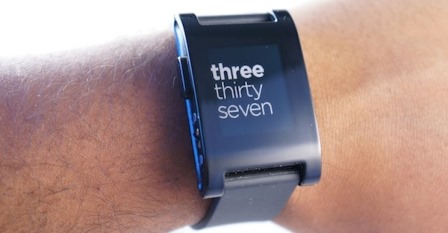 The many colours of the Sony smartwatch
Sony is trying to solve the elegant issue with smartwatches by offering a choice of digital or analog interfaces. Sony’s strategy is to give the user choice in terms of colour and in wrist straps. For example, a user can remove the wrist strap and replace it with any other 20 mm wrist strap.
What also makes the Sony smartwatch special is that it connects to any Android phone for displaying Twitter feeds. The company is also targeting the consumer with an active lifestyle and has produced dedicated apps for this person on Google Play for fitness or for playing music.
The watch is more than bling. It’s functional too. There is a three-level micro display where you can tap or swipe to navigation menu options. When a call or message comes in the smartwatch acts as an Android remote and vibrates. All this for just over $100. 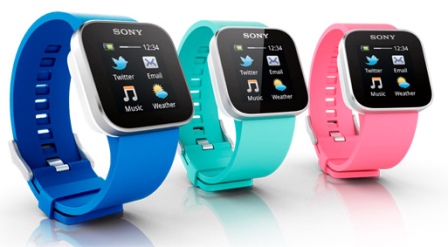 The Apple iWatch or maybe not
The word on the street is that Apple wants to produce a smartwatch, but it’s not going to be a me-too product. Think more Dick Tracy but in the 21st Century. The issue right now is that the trademark for iWatch is held by others in Europe and North America. The question is can Apple pry the iWatch name the same way they did with iPhone from Cisco Systems?
What will the potential iWatch look like or do? It’s too early to tell except that it might have a curved amoled all-round display (as pictured). 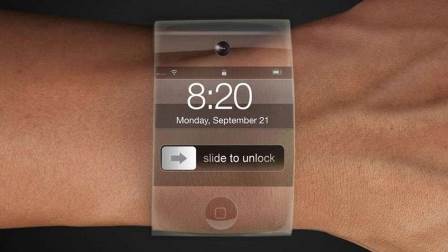 Whatever Apple does Samsung is sure to follow
Apple’s smartwatch is just a well-founded rumour at this point, but a Samsung executive told Bloomberg that its own smartwatch is very real (as the leaked photos that have surfaces, such this one below, would seem to indicate).
“We’ve been preparing the watch product for so long,” Lee Young Hee, executive vice-president of Samsung’s mobile business, told Bloomberg. “We are working very hard to get ready for it. We are preparing products for the future, and the watch is definitely one of them.”
No other details were forthcoming. With the smartphone market saturation though, vendors are searching for the next big thing and the smartwatch may well be it. A number of startups have launched smartwatch offerings through crowd funding, generating record-setting investment, and the established vendors are beginning to take notice. 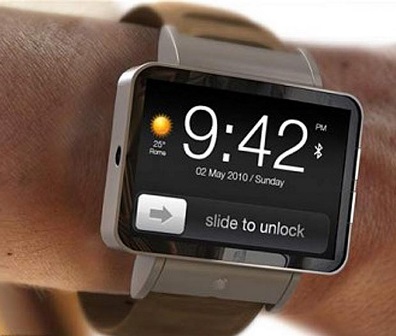 Google Glass or SmartWatch
It might be one or the other or possibly both. Everything is up in the air right now. But one thing remains fact: Google is in the wearable computing business with Google Glass, a head-mounted optical display unit that looks like space-age glasses. Google’s goal is to make computing ubiquitous. That’s great but can it also be natural? That’s the strategic bet for Google. Eye glasses may not cut it, but a watch might.
Now one of the assets from the Motorola acquisition was a Bluetooth smartwatch initially designed for fitness called the Motoactiv.
Rumours on the street say that a release date is close for a Nexus-branded smartwatch from Google. 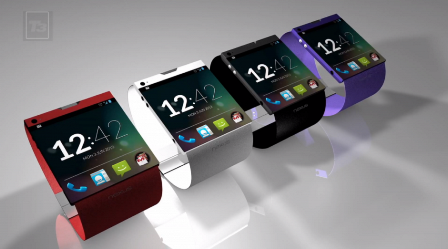 Smartwatches from China
China makes computers and they also make watches. Lots of regular watches so don’t count out the Chinese in the smartwatch department.
China-based Shanda is about to launch an Android-based smartwatch to be called Bambook that will run the Firefox OS. The company already produces e-readers and smartphones.
Right behind Shanda might be two other low-cost smartphone vendors Huawei and ZTE. One of the possible unique selling features of the Bambook is the ability to read aloud an e-book. Not quite sure why you would want to do that, but hey at least it will tell you the time. 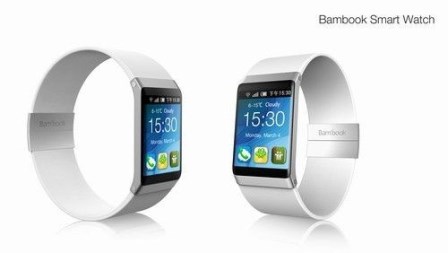 Apple is 35 this year: See how Steve Jobs built the company...