The Consumer Electronics Show wouldn’t feel right without a bevy of wacky gadgets that follow you around at the airport, cater to insomniacs and welcome you in the bathroom with flashing lights. This year’s show didn’t disappoint. Here, we have listed the top 10 weirdest gadgets from CES 2018.

Cuddles with a human being not doing it for you? Or maybe your partner is constantly hogging the stuffed animal. Then the Somnox Smart Sleep Robot might be the answer. The cuddly bot, releasing this July for approximately $750 CAD, is the “perfect shape and softness” according to Somnox. Hold it close and you’ll feel the robot breath, and if you want it to, it will also sing you a lullaby. It’s also washable!

Ivy
by exsens
on Sketchfab

While the French company isn’t mass producing its Eggo Booth scanners yet, people at CES got to see digital doubles of themselves recreated in a few minutes. The avatars can be used for fashion, video games and other forms of entertainment, according to the company, and are able to look, speak and even express emotions. 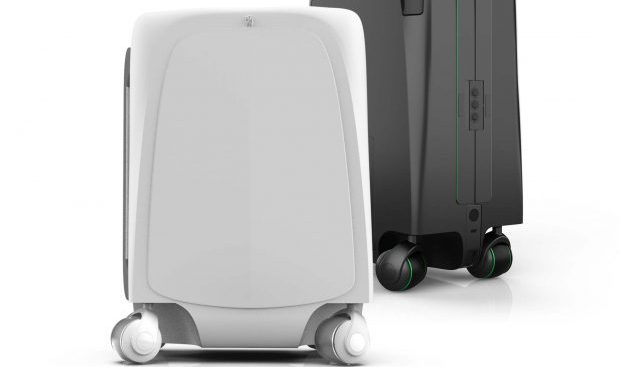 Few people enjoy being at an airport, and hauling around luggage – and sometimes losing it – is frustrating. Equipped with a 170 degree wide-angle camera and laser radars, the CX-1 suitcase can track real-time positioning to keep up with its owners in the midst of a bustling airport. Its max speed is 7 mph, and if someone tries to steal it, the Smart Alarm protection system on the owner’s wristband will raise a red flag. No release date has been announced.

Of course there was a smart toilet at CES this year. The Numi Intelligent toilet with Kohler Konnect – Kohler’s voice-command function – is without a doubt smarter than your current toilet. In addition to warm-water cleansing and an automatic opening-closing lid, the smart toilet has a touch screen remote, foot warmers and speakers with wireless streaming capabilities. It even allows for personalized profiles so each member of the family is welcomed differently upon arrival.

With the help of machine learning, couples can now improve their chances of conceiving a baby. The Mira Fertility is an ovulation monitoring system that detects increased levels of luteinizing hormones through disposable test sticks to learn when a woman is ovulating. The device is small, at only 2.6 inches, and accurate, according to miracare.com. It will hit stores in Q2 of this year.

Moodo’s smart fragrance box is like a DJ kit for the nose, allowing users to adjust the device’s speed to diffuse different smells and change the fan frequency of each scent. Scents and be controlled via an app, Amazon Alexa or manually on the machine. Fingers crossed the four charming little pods, which come at a price of approximately $200, can recreate the smell of pizza, too.

The global beauty product company released a new wearable ultraviolet (UV) sensor that you can stick on your nail. The sensor tracks information about the user’s UV exposure levels that can be retrieved with a phone, and is slated to be released later this summer. L’Oreal says it’s the first battery-free wearable electronic sensor to measure UV exposure, and can store up to three months of data.

This wearable device can curb nausea and vomiting caused by motion sickness, chemotherapy and virtual reality experiences. The company says the band sends natural pulses from the wrist device to the body’s nervous system, specifically to parts of the brain that control nausea, which results in a rebalancing effect. It will be released at the end of January for $175 USD.

What could possibly go wrong with a pair of boots that can propel you forward at 10 mph? Best known for its beefed up scooters, Razor unveiled the Turbo Jetts at CES which brought out the inner child of many adults who braved the motorized footwear. The Turbo Jetts can travel up to 30 minutes on a charge and can even leave a trail of sparks in its wake.

What would you need a First Order Stormtrooper for? To patrol the area and keep intruders away, of course. Users can customize patrol routes and set up checkpoints with verbal passwords that the Stormtrooper can execute and enforce. With the help of an app that uses AR, you can see the world through the trooper’s eyes and go on missions. The little guy can even perform facial scans and memorize up to three people’s faces to make sure no unwanted guests arrive on your doorstep. Equipped with a blaster – that unfortunately doesn’t actually blast anything – you can purchase the companion for $300 USD.

Everything you need to know about Microsoft’s hologram technology

April’s Executive Community Slideshow: It’s spring cleaning, so how do you manage...