This year’s CDN Lifetime Achievement Award celebrates a leader whose 30-plus years in the industry has seen him reinvent himself more than once.

“Companies that are successful need to be constantly reinventing themselves,” said Deidre Deacon, general manager at ViewSonic Canada, who presented the award. “The same is true of the corporate leaders that drive that change. When life throws true leaders curveballs, they simply grab a bat and swing. If they miss, they get up, brush themselves off, inch closer to the plate, and become curveball hitters.

“This year’s recipient of the Lifetime Achievement Award has hit curveballs out of the park repeatedly throughout his 30 plus year career in technology, and he has reinvented himself on numerous occasions.” 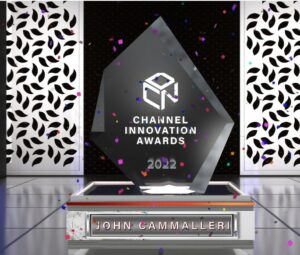 John Cammalleri, vice president of commercial channels, HP Canada, has spent much of his career in channel roles, starting at Synnex in 1991. From there he spent a year at IBM before his first experience at HP. After nine years as a district manager with the printer and printing solutions company, he left to reinvent himself as the country director for the IT products division with Samsung, before returning to the channel in 2007 as vice president, partners, and alliances at Oracle. In May 2010, he returned to HP as vice president (VP) of their solution partners organization, and for the last seven years has been VP of commercial channels.

When told he’d receive the award, Cammalleri was surprised. “I had a little ‘why me’ moment, that’s for sure,” he recalled. “In fact, I had a lot of them, as I can think of a lot of great people that are deserving of such a thing.”

This humility is characteristic, said JoeAnne Hardy, president of WPM Technologies, who has worked with Cammalleri for more than a decade.

“He is humble to a fault, almost, from the perspective of the credit that he would accept, or that the role that he would see that he’s even played in any of this throughout the years, but you can see John’s fingerprints in a lot of things throughout a lot of HP partners,” said Hardy.

Harry Zarek, president of Compugen, agreed. “John is the last person who would want to be recognized. He would recognize everyone on his team, every single member of his team before he would even deign to admit that he had contributed through his leadership and his guidance and his mentoring to allow those people to be as successful as they were, or as they are,” he said. “In fact, he continues to do that today. He’s given guidance as to where he believes we can take our business, and the kinds of things that we should be focusing on. He’ll share with us but in a way that protects the confidentiality, what he sees happening in the industry.”

Yet despite this depth of knowledge, Cammalleri believes in learning from others. “I think you have to,” he said. “We have to stay on top of our game. Do that by learning from people.”

“He’s always understood that business is more than business and that relationships matter,” Hardy observed. “And that we can actually be part of each other’s lives, and care about each other, and be interested in each other, and enjoy each other’s company, and that’s the way it’s supposed to be. And that’s the part about John that makes him really special, and we’re incredibly grateful for just having had the opportunity to get to know him so well and to be honoured to call him a friend.”

Lynn Greiner
Lynn Greiner has been interpreting tech for businesses for over 20 years and has worked in the industry as well as writing about it, giving her a unique perspective into the issues companies face. She has both IT credentials and a business degree
Previous article
CIA Awards panel with SmartONE Solutions, Esri Canada, Shinydocs and Ingram Micro talks harnessing data
Next article
CIA Awards: IDC’s Bremner outlines steps channel must take to succeed