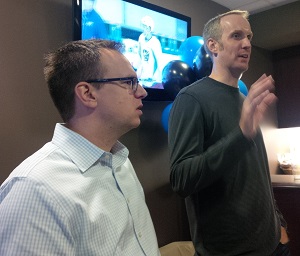 While turmoil may swirl in the upper ranks at Waterloo, Ont.-based smartphone manufacturer BlackBerry, the vendor’s BBM (BlackBerry Messenger) team has managed to snag some momentum, and it hopes to keep that momentum rolling with the launch out of beta Tuesday of BBM Channels.

BlackBerry took members of the technology media to a Maple Leafs game Monday – a 6-0 shellacking by the Columbus Blue Jackets —  to give us an early preview of Channels, which should push out to BlackBerry users through a BlackBerry World update Tuesday afternoon. BlackBerry users will get Channels first – both users on BlackBerry 10 and BlackBerry OS 5 and above. Android and iOS BBM users will have to wait a few more months.

While the BlackBerry executives made a point of not making this comparison, to me the concept seemed similar to Facebook pages, particularly company pages. A brand or an individual can create a Blackberry Channel, and other BBM users, even if they’re not connected to that user, can choose to follow that channel. The channel owner can push out content, such as images, commentary and links, to channel followers, and the followers can like, comment and otherwise engage with the content.

Despite good products, BlackBerry’s future murkier than ever

It’s a way to build broader engagement on BBM outside of one-on-one chats, or even what’s enabled within BBM groups. Brands such as the Toronto Maple Leafs joined BlackBerry Channels during the beta period, sharing content and engaging with Leafs fans.

On the larger picture of monetizing BBM, BlackBerry’s strategy now seems somewhat clearer. Phase one: build an active and engaged community of users. Opening up BBM to iOS and Android in October was a big part of that, bringing BBM to more than 80 million active monthly users. Now, with the launch of BlackBerry Channels, brands will have an effective way to engage interested users. And while BBM Channels itself will remain free, the potential for monetization opportunities through additional features and functionalities for companies seems obvious.

BlackBerry executives told me their focus right now is on building the user base – monetization will come, but later. It is part of the plan though and, while they wouldn’t discuss specifics, one scenario was floated: on the home screen for Channels that users land on, companies could pay for placement as a featured channel, targeting users based on their interests as shown by other channels they follow.

8 new features coming to a BlackBerry near you with BlackBerry OS 10.2

Channels does have an open API, so corporate social media managers will be able to manage their channels form the same pane as they manage their other social networks.

And speaking of BBM momentum, BlackBerry announced a deal to preinstall BBM on Android smartphones from a range of leading OEMs across Africa, India, Indonesia, Latin America and the Middle East, expanding that footprint even further.