Last year OVH, a data storage and Internet services provider, made headlines by expanding its data centre facilities in Canada and reaching out to solution provider partners as well.

The OVH Smart-city Barometer tool revealed that only 32 per cent of Quebecers answered “yes” to the question “do you think your city is smart?”. Citizens of the City of Montreal answered “yes” in fewer numbers (28 per cent) than the residents of Sherbrooke (36 per cent) and Quebec City (35 per cent).

What does all this mean? Cedric Combey, the vice president of sales and marketing for OVH Canada, said the smart city notion is relatively new and this ranking provides a reference from which to track the performance of cities over the coming years.

“This ability to track will be even more relevant given the impact the advent of the smart city will have on our lifestyle and the evolution of the urban way of life. Starting from the smart city concept, we can then use information and communication technology to meet the economic, social and environmental needs of our century,” Combey said. 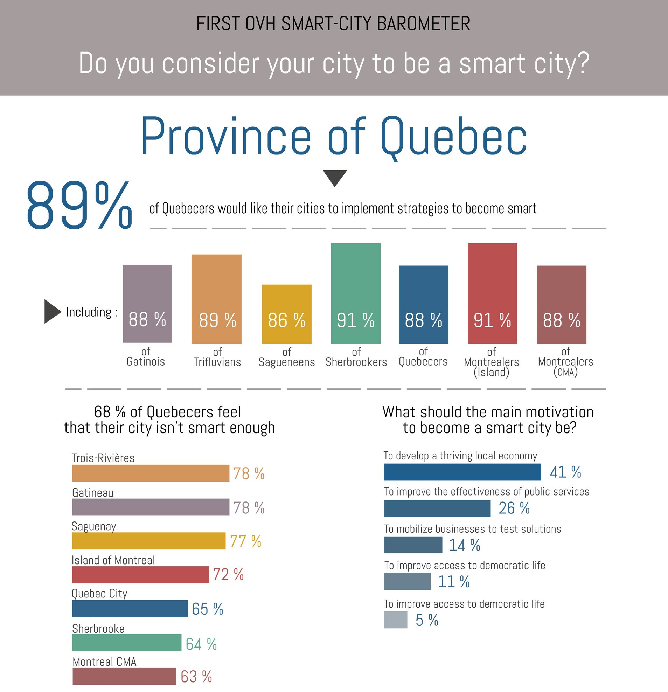 In Saguenay, only 16 per cent of citizens considered that it was “very important” for their city to be smarter, though 69 per cent thought the concept was still “somewhat important.”

In terms of public transit, the Quebecers who took the poll believe public transportation is the sector that most often uses smart technology (40 per cent), closely followed by urban development, such as infrastructures, parks and bike trails (38 per cent), and public safety services (36 per cent).

However, some cities set themselves apart, Trois-Rivières for example, had 59 per cent of citizens indicate that they are very satisfied with local smart urban development, which is 21 per cent more than other cities in which citizens were polled. Conversely, citizens of Quebec City appear to be less satisfied with their public safety services from a smart technology point of view, with a satisfaction rate of only 24 per cent, 12 per cent lower than the Quebec average.

CDN Staffhttps://channeldailynews.com
For over 25 years, CDN has been the voice of the IT channel community in Canada. Today through our digital magazine, e-mail newsletter, video reports, events and social media platforms, we provide channel partners with the information they need to grow their business.
Previous article
IBM CEO reasserts commitment to Watson and AI to partners
Next article
Bell MTS deal finally gets the green light