Hewlett Packard Enterprise (HPE) has announced it has opened a new Canadian head office in Mississauga, ON, Canada, designed as a collaboration and culture hub with a particular emphasis on new graduates.

In April 2022, HPE occupied its new Canadian headquarters at 1875 Buckhorn Gate, Mississauga, Ontario, relocating from its previous home 1.9 km away on Spectrum Way in Mississauga. The new location houses not only a hybrid office environment but a Customer Innovation Center, where the company will be hosting customers and partners for executive briefings, workshops, and technology showcases, a spokesperson for HPE told IT World Canada.

“The former site, occupied for twenty-four years, has been vacated except for an approximate 200 square metre lab space; the end of an era and the beginning of a new one,” the spokesperson said.

For those starting their careers, hands-on training and support are beneficial. The new 1742 square metre leased space is designed to enhance team members’ onsite experiences, from facilitating collaboration, heightening culture-building, and providing amenities to let teams get the maximum benefit from getting together. Wellness and the environment are also a crucial part of the site’s DNA, with large amounts of bike parking, outdoor spaces with seating and tables, a fitness centre, showers, lockers, a cafe, and an eatery on-site, the company explained. 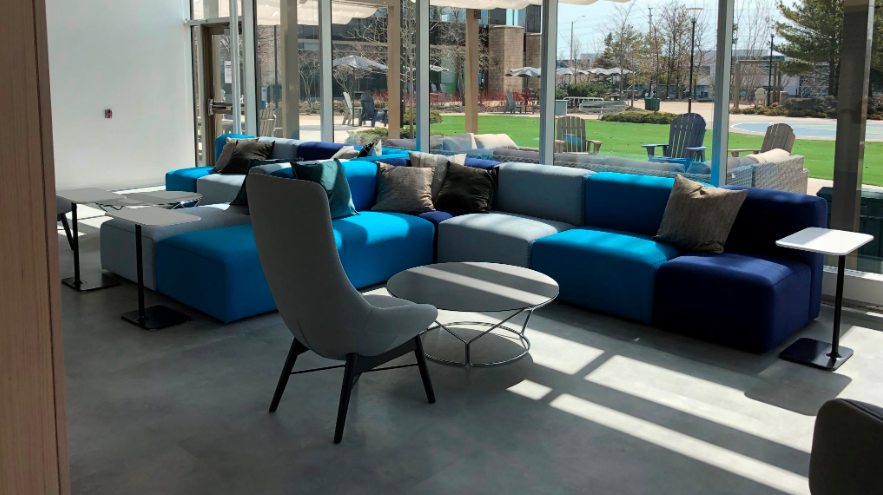 “When we talk about our workplace, we’re not necessarily talking about a physical location, but rather, it’s the team member experience and ways that we show up for each other and our clients every day,” said Mike Hilton, president and managing director, HPE Canada.

In 2021, HPE created its Edge-to-Office experience, which prioritizes flexibility and choice in the balance between office and remote work while maintaining a strong culture and connectedness. The company says that its offices, such as the new campus in Mississauga, are envisioned and transformed into hubs for collaboration and social interaction, rather than full-time dedicated workstations.

The new hybrid way of working, referred to ‘Edge-to-Office’, is designed as a culture and collaboration hub to support up to 300 team members, over 90 per cent of whom are designated remote or ‘Edge’ who work remotely and come to the site primarily for meetings and team collaboration. The less than 10 per cent remaining headcount work at the site most of the workweek. On-site there are fifty-eight sit/stand workstations, about half reservable for the remote team members, with an additional forty touchdown seats for short-term work, the spokesperson explained.

“HPE approached the work-from-home situation from two angles – as both an employer of 60,000+ team members, and as an IT infrastructure provider that companies rely on to help unlock value from their own data and technology,” Hilton said. “We needed to be an example we could point to when speaking with our clients on how to adapt to hybrid or distributed environments, so Edge-to-Office is part of our DNA. And for us, when we talk about our workplace, we’re not necessarily talking about a physical location, but rather, it’s the team member experience, and ways that we show up for each other and our clients every day. We continue to invest in tools and resources to keep team members connected and promote collaboration, for both in-person and virtual environments.”

“The Edge-to-Office program has been a boon for the company and team members. With hybrid working situations the norm, we can pull talent from all over the country, no longer bound by long commutes. The flexibility allows our colleagues the opportunity to fit HPE into their lives, rather than the other way around,” he added.