Microsoft challenges Slack with a chat service in Office 365

The competition between office communication platforms is starting to get more and more crowded with Microsoft entering the race with Microsoft Teams, a new chat-based workspace within Office 365.

Aimed at organizations that have multiple teams working on different projects at once, Microsoft Teams is the company’s answer to popular communication service, Slack. It is fully integrated into Office 365, and features threaded chats, deep integration with Skype built into the app, Power BI and Planner integration, and uses Word, Excel, PowerPoint and OneNote. Since the app is inside of Office 365, this allows users to share information across all aspects of Office 365.

“Microsoft Teams is a chat-based workspace where people can come together in a digital forum to have casual conversations, work on content, and create work plans, all integrated within one unified experience,” said Microsoft CEO Satya Nadella at the launch event.

“With Microsoft Teams, we see an opportunity to create a more open, fluid, and digital environment – one with the capabilities and experiences of teams at its heart,” said Kirk Koenigsbauer, Microsoft CVP of office marketing. 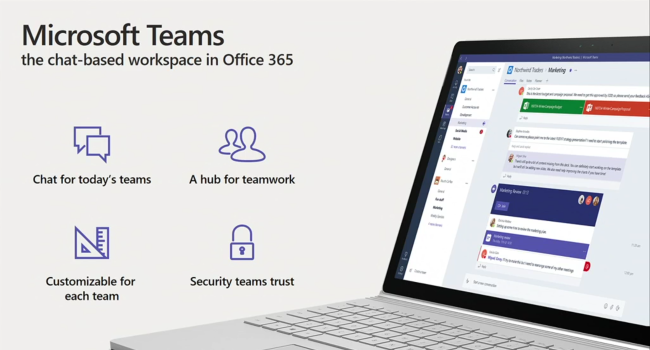 Microsoft Teams consists of four key principles: chat for today’s teams, a hub for teamwork, customizable for each team, and security teams trust.

Chat for today’s teams means that the app includes threaded, persistent chat, open group chat or private 1:1, Skype for voice and video calls, the ability to easily switch between teams, and show individual personality with emojis, stickers, and GIFs.

As a hub for teamwork, Teams has Word, Excel, PowerPoint, and OneNote built in, and is integrated with SharePoint, Power BI, and Planner. It also provides access to Microsoft Graph, allowing users to search across people, files, and chats based on the Office 365 Groups service.

Microsoft is trying to make Teams as customizable as possible with tailored channels and custom memes, integrated common cloud services with Tabs, and notifications through a shared connector model. Taking a page out of Slack’s book, Microsoft has also included Microsoft Bot framework support.

Security is an important part of Office 365, and that continues with Teams. Data is encrypted at rest and in transit, Teams is compliant with EUMC, HIPAA, and more, there is multi-factor authentication for enhanced protection, it is served from Microsoft’s global hyper-scale network.

Microsoft Teams is served from data centres across the Americas, Europe, and Asia. Over 150 partners are supporting Teams, such as Intercom, Zendesk, Hootsuite, and Asana. Developer previews of the app are also available starting today.

“Microsoft Teams is the ideal complement to the existing suite of collaboration tools offered through Office 365, neatly addressing the space between instant messaging, email, and enterprise social networks,” said Chris Miller, Avanade CTIO, in a statement to CDN. “What really makes today’s announcement a potential game-changer in the market is the seamless interoperability that Microsoft Teams offers into Office 365, and its 70+ million user base.”

Slack, currently the lead office communication platform, took out a full-page ad in the New York Times titled ‘Dear Microsoft’ ahead of the Teams announcement this morning. (Via VentureBeat)

“Wow. Big news! Congratulations on today’s announcements,” the letter began. “We’re genuinely excited to have some competition.” The letter would also highlight a few of the key areas that Slack has identified as its reason for gaining traction, warning that Microsoft can’t simply copy Slack.

Specifically, Slack called out Microsoft’s ability, or rather inability, to work well with third-party services, something Slack has done in order to drive users to its platform. The full open letter can be viewed here.

Alex Radu
is a staff writer for Computer Dealer News. When not writing about the tech industry, you can find him reading, watching TV/movies, or watching the Lakers rebuild with one eye open.
Previous article
Google to open 14 “Experience” stores throughout Canada
Next article
BYOD market more than doubling in the next five years