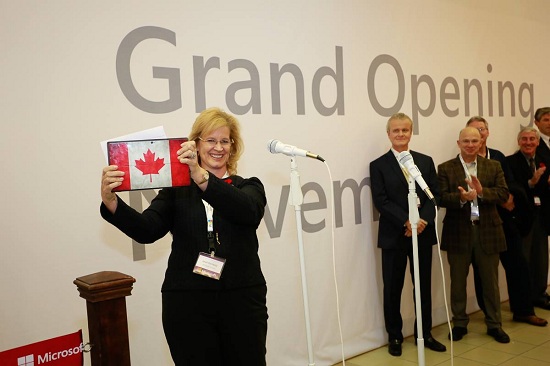 When she got to Microsoft Canada in October of 2013 customers, channel partners and plenty of employees described the subsidiary as a “mess”. The other problem was the revolving door at the corner office at Microsoft Canada. The Canadian operation was lacking leadership, structure and direction in a big way.

People in the IT community at large expressed to me that Microsoft was so important to everyone that it needed a Canadian executive at the helm. They did not want another transplanted executive in charge because it simply wasn’t working anymore. They were demanding someone who wanted to stay and provide leadership and structure.

In a blog post, I expressed those concerns. You can read that here: It’s time to hire a Canadian to run Microsoft Canada

And, since Kennedy is a native of Chicago; it did not make her Canadian. She was unknown to the marketplace too. But do you really want to know what else she was? She was the right choice. At the right time. Let’s not forget that Microsoft was transitioning its business model too at the time. This was not an easy job and I can only imagine what could have been running through her mind at the time.

But Kennedy showed a lot of class and poise because she knew she wasn’t the popular choice, but accepted the challenge anyway. And, nothing seemed to distract her from what she needed to do. Nor did she take anything personal. Its a credit to her character.

Related Blogs
Geeman offers his take on new Microsoft re-org
Will the HoloLens work as a business device?

When CDN learned of Kennedy’s appointment I called up a top Microsoft channel partner to get reaction. I will not share this person’s name but this individual was clearly in the Do Not Hire Another American Camp. This person also never heard of Kennedy before the announcement. But what this person told me that day has stayed with me ever since. The person said: “We need to give Kennedy a chance. I have no clue who she is or what she is capable of, but I have a gut feel she will do great things for Microsoft Canada and the partners.”

I was not expecting to hear this. This person also planned on going down to a Microsoft Canada function in downtown Toronto to lend support to Kennedy. I was attending the same event and got an opportunity to talk to Kennedy who told me this was her “dream job.” During the interview for the CDN Newsmaker of the Year profile I asked her if this was still a dream job for her. And, she answered “yes.”

Its an amazing transformation because the narrative in the Canadian IT community for Microsoft Canada before Kennedy’s appointment was negative and when she arrived for that event on Oct. 1st of 2013 that narrative changed 180 degrees to a positive one. There have been some bumps in the road but the narrative has stayed positive throughout her tenure at Microsoft Canada.

Kennedy’s results speak for themselves. You can read them all here:

What to make of Microsoft Canada’s new president

In the end, Kennedy leaves Microsoft Canada on a very good trajectory. It’s now in the hands of Kevin Peesker.

One quick hit before I go. It is with profound sadness that we announce the sudden and unexpected passing of Darrel Ryce at the age of 55. Darrel was a pillar in the NPD Canada office. In his 16 plus years with NPD, he played a crucial role in launching and growing Canada’s IT and Video Game services.  He truly valued his time with his clients, who always appreciated his deep industry knowledge and insight.  He loved his co-workers and derived tremendous satisfaction from watching those around him grow and move forward in their careers. He truly cared about his colleagues – just two days before his death he spent the afternoon walking around the office collecting donations for those NPD associates affected by the flooding in Houston.

Those who worked with Darrel will miss his witty sense of humour, his presence at our noon hour card games, his unmistakable fashion sense (jeans, hoody and sneakers were his wardrobe of choice) and his infectious positivity.

He was a true family man who made sure to balance his work life with his time at home. He is survived by his wife Susan and his two daughters Alison and Nicole.