Ideaca first learned of Brazil-based mobile solution provider Sigga when one of its salesmen stumbled across its booth at SAP’s Sapphire conference one year ago, so it was fitting that it signed a deal to be the first Canadian partner to sell the solution over dinner at this year’s Orlando-based trade show.

Calgary-based Ideaca partner Scott Cameron recalls how his team thought the Sigga SM2 software solution would be a great fit for its clients. Ideaca, which also has a main office in Toronto, sells SAP software as a large portion of its business and works with railway operators, oil and gas firms, and mining companies. At first Ideaca thought it might be a fit only for the rail industry, he says in an interview, but further discussions with Sigga showed that it was an off-the-shelf solution that could work with many of its clients.

“We’re a lead adopter and we’re excited to see where it goes,” he says. “There’s not a lot of solutions out there to tell where our customer’s assets are right across the country.”

The software serves as a connection backbone between mobile devices and SAP systems. A rail yard foreman that’s making a decision on which car to load with certain cargo might use it to locate a specific car, for example, or determine it would be easier to load the cargo into a more accessible car than the one identified in the order.

Idea is a good partner for Sigga to work with because it has experience implementing similar technologies, says Romeu Sciotta, vice-president of global sales, Sigga. “This is the type of company we are looking for. We don’t want to teach companies how to do plant management, we want to take advantage of their knowledge.” 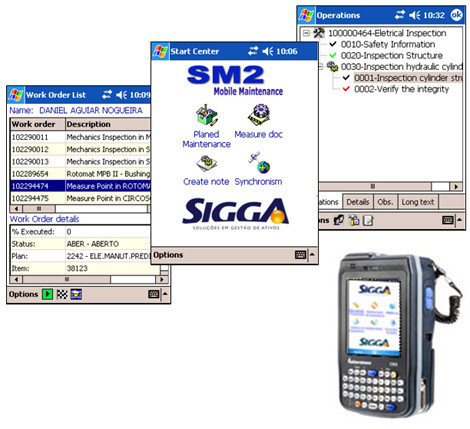 Sigga hopes working with Ideaca will help increase its footprint in Canada. It’s also looking to add at least one more partner to help gain some market traction. To that end, its also offering special pricing on the first three customers that buy the Sigga SM2 solution from Ideaca to help build up client references.

Customers will also get access to new software from Sigga, designed to bring analytics to mangers with visual dashboards. Pricing works on a per unit basis and costs are negotiated based on the volume of the order.

The deal came after nine months of collaboration between the firms, Cameron says. During that time Ideaca staff was trained on using and installing Sigga software, and the teams supported each other at other industry trade shows.

The final pen to paper was made at a customer appreciation dinner at Sapphire on Tuesday night.