Which video chat service is better, and who should use which one? I put both Facebook Video Calling and Google+ Hangout through their paces and found that they both have their pros and cons.

Facebook’s video chat is currently more stable, requires fewer system resources and has higher-quality video and audio. On the other hand, Google+ Hangout is a more fully featured application, clearly designed for group video chat. Those who have made it into Google+ may find it buggy, but in the long run, Hangout could prove to be more useful than Facebook’s video feature.

Facebook’s new Video Calling service is powered by Skype; perhaps because of that, it’s simple and straightforward to use. You’ll first need to download a plugin by going towww.facebook.com/videocalling, clicking on the Get Started button, then on the Setup button. At that point, you’ll download and install a Java plugin. 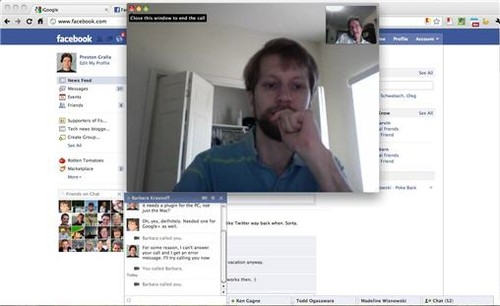 You don’t, however, necessarily need to head there first. When you receive or try to make your first video call, you’ll be prompted to install the plugin. I found this out because when I tried going to www.facebook.com/videocalling on my MacBook Air, I received an error message. However, when I tried just clicking the video icon in Facebook chat to make a video call, the plugin installed with no problems.

Once you’ve got the plugin installed, making a video call is exceptionally easy. Look at the list of your friends (in the lower right-hand corner of your Facebook page) who are currently available on Facebook chat. Double-click a name, and you’ll see there’s a new icon at the top of the chat screen — a small video camera. Click it to send an invitation for that person to participate in a video chat. They’ll receive a pop-up notification to a video chat, and if they don’t have the plugin installed, they’ll be prompted to install it.

I found the video and sound quality of video calling in Facebook to be quite good — there was little, if any, video lag and the sound came through crisp and clear with no delay. This shouldn’t be a surprise; Skype has been around for a while, and so has had time to iron out any video or audio bugs.

Using video chat is simple and straightforward — just look at the camera and talk. As with most chat apps, the video of the person with whom you’re chatting takes up most of the screen, and you see a small thumbnail of your own video in a corner of the screen. You can move the video chat screen around your display and resize it as well. Ready to sign off? Just put your cursor anywhere in the video window, and a small labeled button will invite you to end the session.

One drawback to Facebook’s video chat is that it’s designed for one-on-one only. If you try to connect to a Facebook user already involved in a video chat, you’ll be told that they’re not available; you can leave a video message if you’d like.

All in all, there’s nothing earthshaking about the capabilities of the new video chat feature, other than you can now easily chat with your friends, even if you or they don’t have Skype. Its importance is its ease of use for Facebook users, not the depth of its feature set.

Google+ Hangout is more fully featured than Facebook Video Calling — to begin with, it’s designed primarily for group chats rather than one-on-one talks — but, possibly because it’s a beta, it’s still got a few wrinkles to iron out.

As with Facebook, if you haven’t used Hangout before, you’ll be prompted to install a plug-in the first time you click on the “Start a hangout” button. Once it’s installed, you’re ready to go. Creating a Hangout is as simple as pressing the Start a hangout button on the right side of your main stream page (in Google+, your stream is the comments and notifications you get from everyone else). A separate video window then opens — this is your “hangout.”

As with the streams in Google+, you need to keep in mind whom you want to invite to your Hangout — and that depends on which circle(s) you choose. As I described in my recent review, Google+ is based on the idea of circles — you group friends, family, co-workers and acquaintances into separate circles, so that it’s easy to determine what kinds of information you want to share with each of those different groups.

You can create a Hangout for a single circle, multiple circles, or all your circles. Just as with the rest of Google+, the Hangout feature is designed to put you in charge. So if you’re viewing all comments and notifications from your Family circle, for example, and you click Start a hangout, only people in your Family circle will see that you’ve started a hangout and only they can participate. If you are viewing the stream that shows comments and notifications from all circles, everyone in all of your circles will see that you’ve started a Hangout and can participate.

You can change whom you want to invite. After the video window opens, you have a chance to switch which circles will get the notice that there’s a hangout by removing the existing circle(s) and adding others. (So, for example, you can remove the Family circle and replace it with your Work circle instead.) You can also add individual invitations by simply typing in the names of those you want to invite (assuming, of course, that they’re members of Google+). 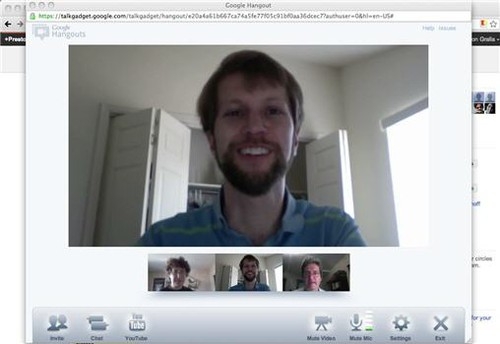 The Hangout pop-out window is larger than the one that appears for Facebook Video Calling. You see a large video of the person to whom you’re talking in the main part of the screen. Across the bottom of the screen, there are thumbnails of everyone in the chat, including you.

When more than two people participate in a Hangout, the large image shows whoever is talking — Hangout chooses which person will be center stage depending on audio feedback. If several people talk at the same time, the video goes back and forth from one to another.

Hangout requires a substantial amount of system resources; on my MacBook Air, it slowed all my other apps considerably and crashed once. One person with whom I was chatting tried to use a netbook, but it continually crashed; and she had to switch to a more powerful system. (She had no trouble using the netbook with Facebook’s video chat.)

In addition, during my first session with Hangout, I found both the video and audio to be quite problematic. At times, the video lag was so bad that it looked like a series of still images. Audio would cut in and out rather than be a steady stream. I also experienced an odd audio problem — at times, a few seconds after I would speak, I would hear my voice coming to me in the b

Preston Galla
Previous articleSAP: No change at the top as board extends CEO contracts
Next articleHP calls Oracle’s secrecy claim a cheap shot

Google+ lets you hang with a circle of friends

Cloudli Communications, a Montreal-based provider of voice, data and...

The FDA bans the sale of Juul e-cigarettes, Meta...

A Canadian password management application has added a dashboard...

Amazon may run out of workers, Texas plans to...

It’s a subject that has caused many sleepless nights...