When Hewlett-Packard Co. set out to create the seventh generation of its XP tier 1 storage array, it didn’t hold back.

The XP7, announced Wednesday, is built around a new chassis, new processors, new cache and memory architecture, new encryption technologies and a new blade module that can hold up to 3.2 TB of flash drives. A single array can hold up to 4.5 PB of storage.

The result is a SAN array for mission-critical applications in data centres with traditional architectures that has three times the performance of the existing XP P9500 model. 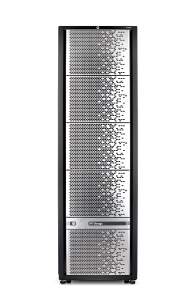 An HP official said the XP7 is the same array that Hitachi recently announced. Hitachi builds the system for HP for its XP storage line.

If you want numbers, it is capable of delivering 3 million IOPS (I/O per second with sub-millisecond response times, and six-9s uptime, Kyle Fitze, worldwide director of the XP storage line, said in an interview.

“To this point customers have had to chose between either a flash-optimized storage system that perhaps had really great performance but typically lacked the rich features and functions that mission-critical customers are looking for, or a mission-critical array that is very reliable, very high performing, very rich in data services but not necessarily the fastest array on the planet,” he said.

Why are storage unit shipments shrinking?

Another new way to sell storage

HP makes its stand for HAVEn

“With this introduction we think we’re giving customers both high performance and rich data services and reliability in a single array.”

The 15-year-old XP line is made by Hitachi Ltd. for HP, which adds things like performance management, disaster recovery software and plug-ins for Microsoft, SAP and other environments.

It differs from HP’s 3Par StoreServe tier 1 array, which is aimed more at virtualized and service-oriented environments.

The XP7 continues to allow external storage virtualization, thin provisioning and smart tiering. New is the ability to create a layer of abstraction around the resources that allow the provisioning of multiple arrays in a single XP frame, Fitze said. That lets customers segment and secure workloads with FIPS 140-2 encryption.

The virtualization capability can also be used on older XP arrays for migrating data to an XP7 system, with the old array keeping the same serial number and virtual LUN addresses.

Editor of ITWorldCanada.com and Computing Canada, covering all aspects of enterprise computing, telecommunications, network infrastructure and government IT issues. An IT journalist since 1997, I've written for several of ITWC's sister publications.