Nadella is just the third CEO in the software giant’s history, following Gates and Steve Ballmer. A native of India, Nadella worked at Sun Microsystems before joining Microsoft in 1992. He has led a number of businesses within Microsoft, including the servers and tools division and, most recently, as head of the company’s enterprise and cloud business, has been at the forefront of the company’s culture shift from a software business to one focused on devices and services.

“During this time of transformation, there is no better person to lead Microsoft than Satya Nadella,” said Gates, in a statement. “Satya is a proven leader with hard-core engineering skills, business vision and the ability to bring people together. His vision for how technology will be used and experienced around the world is exactly what Microsoft needs as the company enters its next chapter of expanded product innovation and growth.”

Nadella has been seen as a stay the course choice by many observers, and in a public letter to Microsoft employees released Tuesday, Nadella didn’t deviate from the devices+services strategy the vendor has recently charted.

“We are the only ones who can harness the power of software and deliver it through devices and services that truly empower every individual and every organization,” said Nadella. “We are the only company with history and continued focus in building platforms and ecosystems that create broad opportunity.”

Before Nadella was named to the position, Forrester analyst James Staten said he’d be a good choice for the top job. 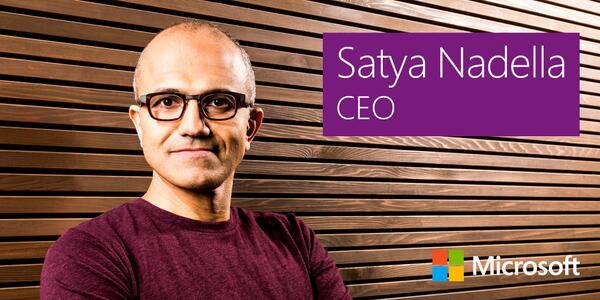 “Satya Nadella is a tough, number-driven leader. If he is chosen, it will be a great thing for the overall direction of the company,” Staten said. “He is a visionary, has passion for change, is making it happen and knows what it takes to drive change in the unique Microsoft culture. An outsider would have a hard time accomplishing this coming in fresh. And time is of the essence.”

Several high-profile external candidates had been touted for the CEO’s role, including Ford Motor Co. CEO Alan Mulally and former Nokia CEO Stephen Elop, but many either dropped or were dropped from consideration. Nadella emerged as the favourite from a pack of internal candidates that also included COO Kevin Turner and other senior Microsoft executives.

— With files from Howard Solomon

Jeff Jedras
A veteran technology and business journalist, Jeff Jedras began his career in technology journalism in the late 1990s, covering the booming (and later busting) Ottawa technology sector for Silicon Valley North and the Ottawa Business Journal, as well as everything from municipal politics to real estate. He later covered the technology scene in Vancouver before joining IT World Canada in Toronto in 2005, covering enterprise IT for ComputerWorld Canada. He would go on to cover the channel as an assistant editor with CDN. His writing has appeared in the Vancouver Sun, the Ottawa Citizen and a wide range of industry trade publications.
Previous article
B.C. Interior home to newest Telus data centre
Next article
Canon Canada names a new president