Everyone’s a winner on every CDN Top 100 Awards Night. Unfortunately, as much as we’d like to hand out trophies to every attendee, only a few get to take home a memento of their outstanding performance in channel.

This year’s event saw the passing of the baton from one channel stalwart to another, as well as the inspirational emergence of new industry favourites. More than 200 representatives from solution provider organizations across the country took part in this year’s Top 100 Solution Providers Event, sponsored by Tech Data Canada, HP Canada, Dell Canada, StorageCraft and Canon Canada, held at the Paramount Conference and Event Venue in Toronto.

Enjoy this slideshow of the CDN Top 100 winners.

The Toronto-based direct market reseller reached the No. 2 slot in 2012, but powered to the top spot with a revenue range of $475 million to $500 million in 2013. CDW Canada was the only company on the CDN Top 100 Solution Providers 2013 list to reach that range. Paolo Del Nibletto, editor of CDN, noted the “look of shock and surprise” on the people’s faces when CDW’s win was announced because the company managed to barrel past Softchoice, a channel powerhouse that held the top spot the previous year. 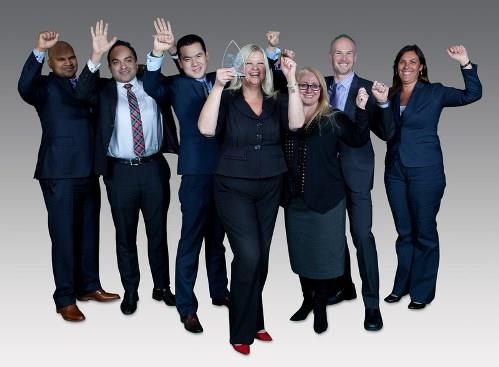 Softchoice makes strong showing at No.2

Scott Harper (right), vice-president of sales for Softchoice Corp., said 2013 was a “transition year” for the company. Softchoice continued to be one of the top five solution providers in the CDN Top 100 roster, but it slipped from its 2012 top spot to the No. 2 slot. However, the company did a commendable job in doubling its customer base and further pushing forward its new managed software offerings last year. Softchoice pulled in revenues in the $450 million to $475 million range in 2013. In the photo with Harper is award presenter, Rick Reid, president of Tech Data Canada. 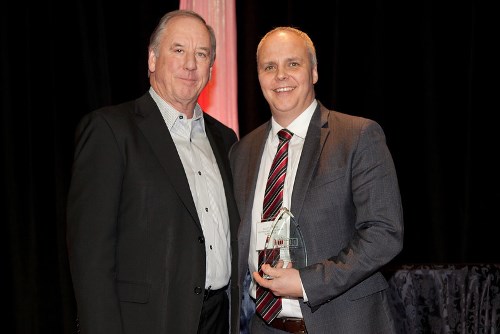 “It’s a great time to be in the channel in Canada,” proclaimed Andrew Stewart (left), vice-president of corporate services and marketing at Compugen Inc., shortly after accepting the award for No. 3 Top Solution Provider. The company’s efforts in making sure its customers made a smooth transition to the cloud definitely paid off. Compugen’s revenue for 2013 was well within the $450 million to $475 million range.

What makes Compugen No. 1 in the eyes of other channel players though, according to award presenter Lloyd Bryant (right), vice-president and general manager of Hewlett-Packard Canada, is the company’s commitment to Green4Good. Last year, Compugen raised nearly $50,000 for the Canadian Centre for Abuse Awareness through its  Green4Good charity event.

View the video of Compugen here. 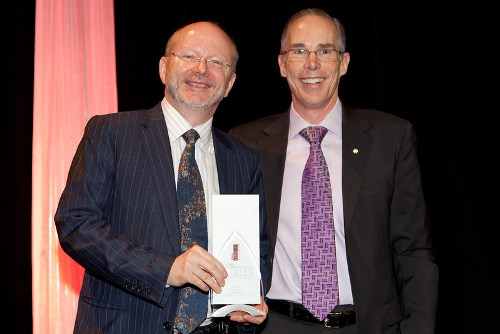 CompuCom rises to No. 4 with cloud strategy

By expanding its offerings with new private cloud and virtualization offerings, CompuCom Canada raised its 2013 revenues in the $400 million to $450 million range. The 20-year-old Mississauga, Ont.-based  IT solutions and services firm was named No. 4 Solution Provider of the year at the latest CDN Top 100 Awards. In the photo is Phil Soper (right), vice-president and general manager of CompuCom Canada, and Lloyd Bryant, vice-president and general manager of  HP Canada. 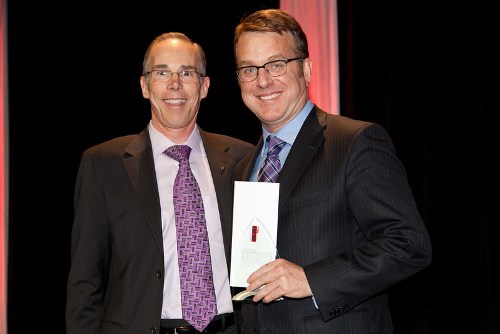 OnX is bang on at 5th spot

Marty Blake (left), vice-president of OnX, said the company focused on building strong partnerships and helping customers transition to new Software-as-a-Service and Infrastructure-as-a-Service models in 2013 to grow into one of the Canadian channel’s most successful private and public cloud players. The company’s revenues for 2013 were in the $300 million to $325 million range. Also in the photo is Louie Papanicolopoulos, manager of channel sales for Canon Canada. 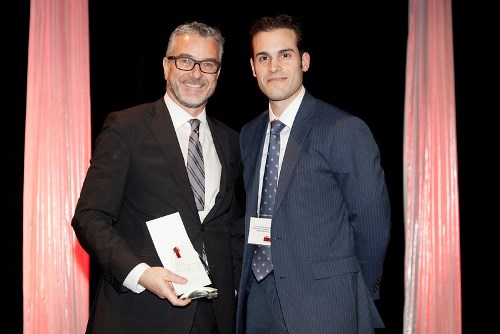 Decisive Technologies is the ‘new kid’ in town

This year’s Newcomer of the Year is really not so new to the channel — Ottawa-based Decisive Technologies has been around since 2001. Within that period, the company has managed to position itself as a thought leader in the area of enterprise class data centre technology. Joey Harrison (left), vice-president of sales for Decisive, accepted the Newcomer of the Year Award from Shawn Massey, channel sales manager of StorageCraft. 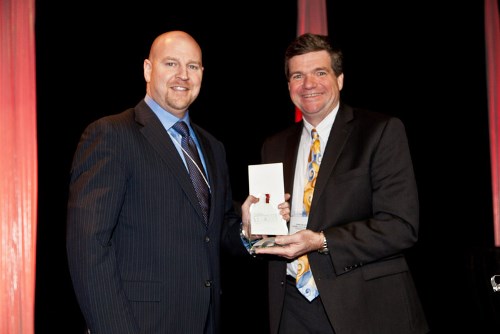 EPAM Systems rises to the occasion

Attendees and judges of this year’s CDN Top 100 Awards are still talking about EPAM Systems Inc.’s phenomenal accomplishment. From near the bottom of the Top 100 list in 2012, the company leaped over 52 spots last year to clinch the CDN Top 100 Rising Star award

Predrag Stegnajic (right), director of business development for EPAM, said it was all about creating excellent business apps. Also in the photo is Louie Papanicolopoulos, manager of channel sales for Canon Canada. 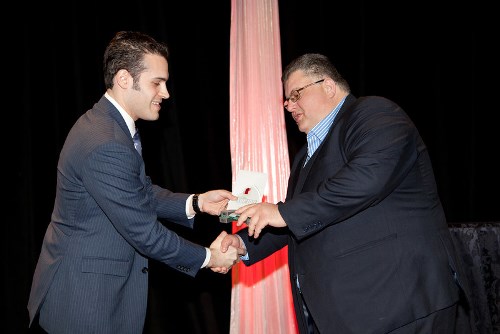 Being “small but nimble,” worked out to FoxNet Inc.’s advantage in 2013. The Waterloo, Ont.-based company distinguished itself at CDN Top 100’s small business solution provider of the year.  Bill Fox (left) , president of FoxNet, accepted the award from Tara Fine, channel chief, for Dell Canada. 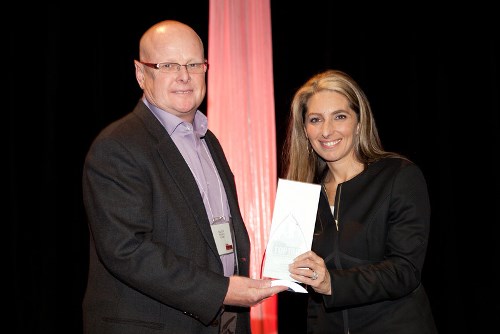 Stoneworks is mid-sized business solutions provider of the year

Stoneworks Technologies Inc., leveraged its expertise in IT planning, solutions and operating services to seize the CDN Top 100 award for mid-sized business solutions provider of the year. The company raked in revenues in the $30 million to $40 million range last year. 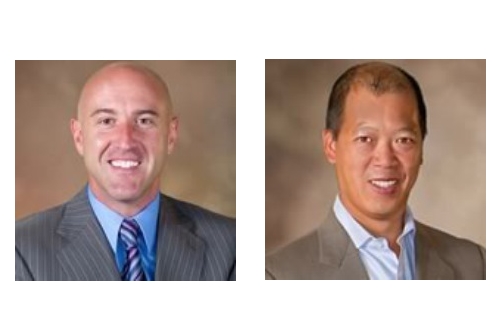 Calgary-based Mainland Information Systems Ltd. was the fastest growing company in Alberta last year. But that wasn’t enough for the firm, because Mainland also bagged the CDN Top 100 solution provider of the year award for Western region.

Natalie Ireland, (right) chief financial officer of the company, credited “our Mainlanders giving their best every day,” for the firms success. Ireland accepted the award from Shawn Massey, channel sales manager of StorageCraft. 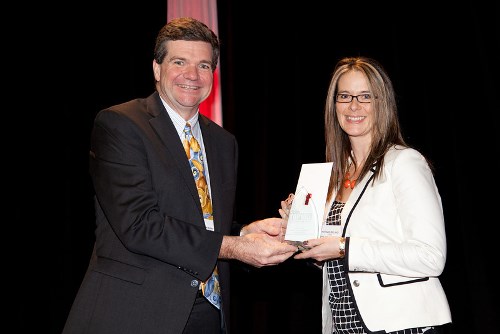 Triware is top in Eastern region

Triware Technologies Inc. took the award for top solutions provider in the Eastern region. The company, based in St. John’s , Newfoundland, specializes in network design and suppport, business process, technical analysis and programming. 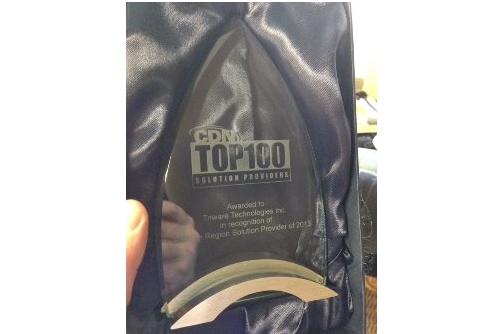 Quebec-based CPU Design Inc. refused to give up its leadership in the Central region. The company retained its hold on the CDN Top 100 solution provider of the year title for the region for the second year in a row.

Stephan Wenner (right) , vice-president of sales for CPU, credits the company “strong team” and its diversification initiatives for their success.Bruce Stuart, president of Channelcorp, is also in the picture. 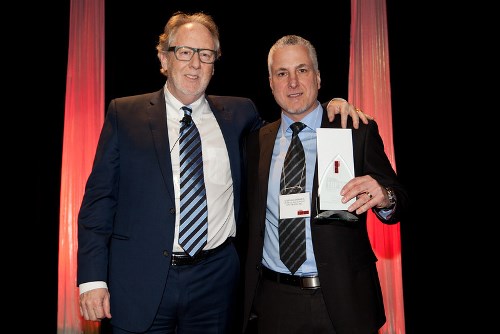 New technologies from the Computex show