CDN Women of the IT Channel Ecosystem 2014: Leaders 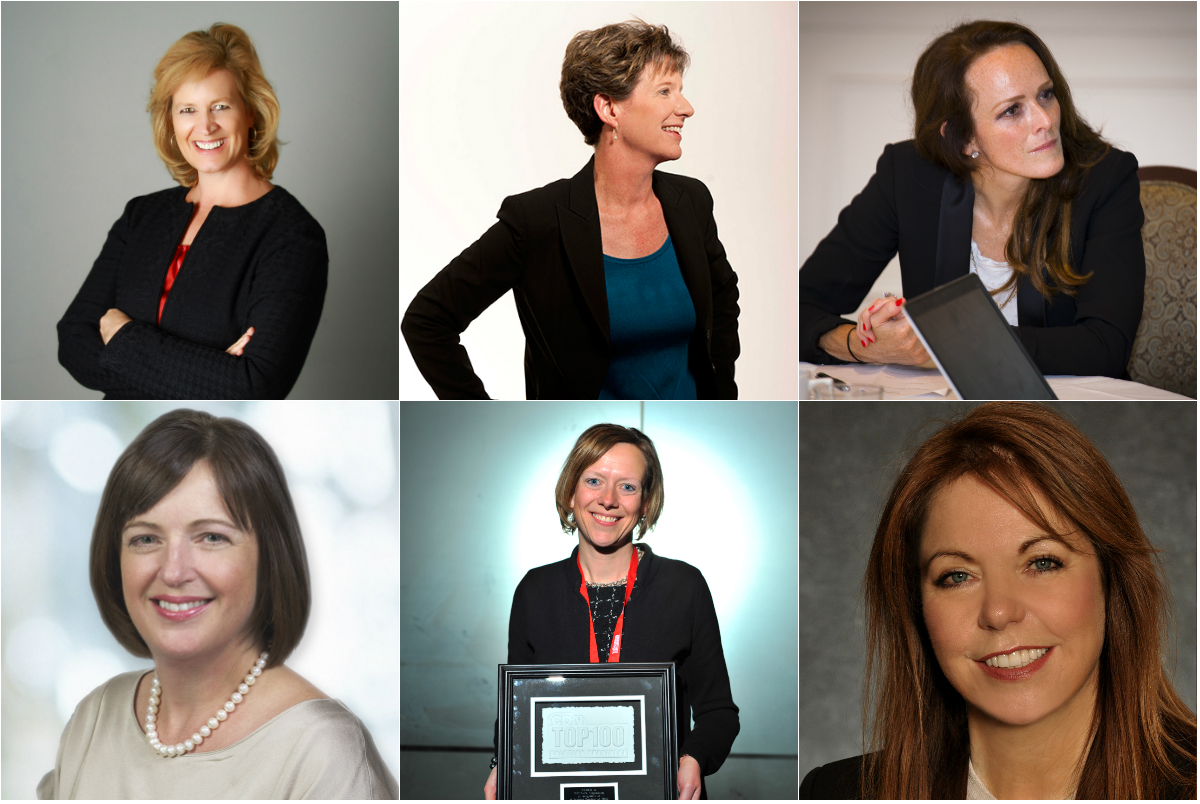 CDN Women of the IT Channel Ecosystem 2014

CDN’s fifth annual list of Women in the IT Channel Ecosystem selected top personalities from all sectors of the channel.

These senior women executives are shaping the economy of IT in Canada. This year CDN broke down its list into sections to properly represent each area of the channel. They are leaders, channel chiefs, distributors, trusted advisors and a special category called mavericks, which features executives in sales and marketing roles. There are 23 returning executives from 2013’s list.

There are just three non-Canadian born executives who made the cut. As for the Canadians, some hold worldwide roles, while others have a specific North American responsibility.

Our first category is: Leaders 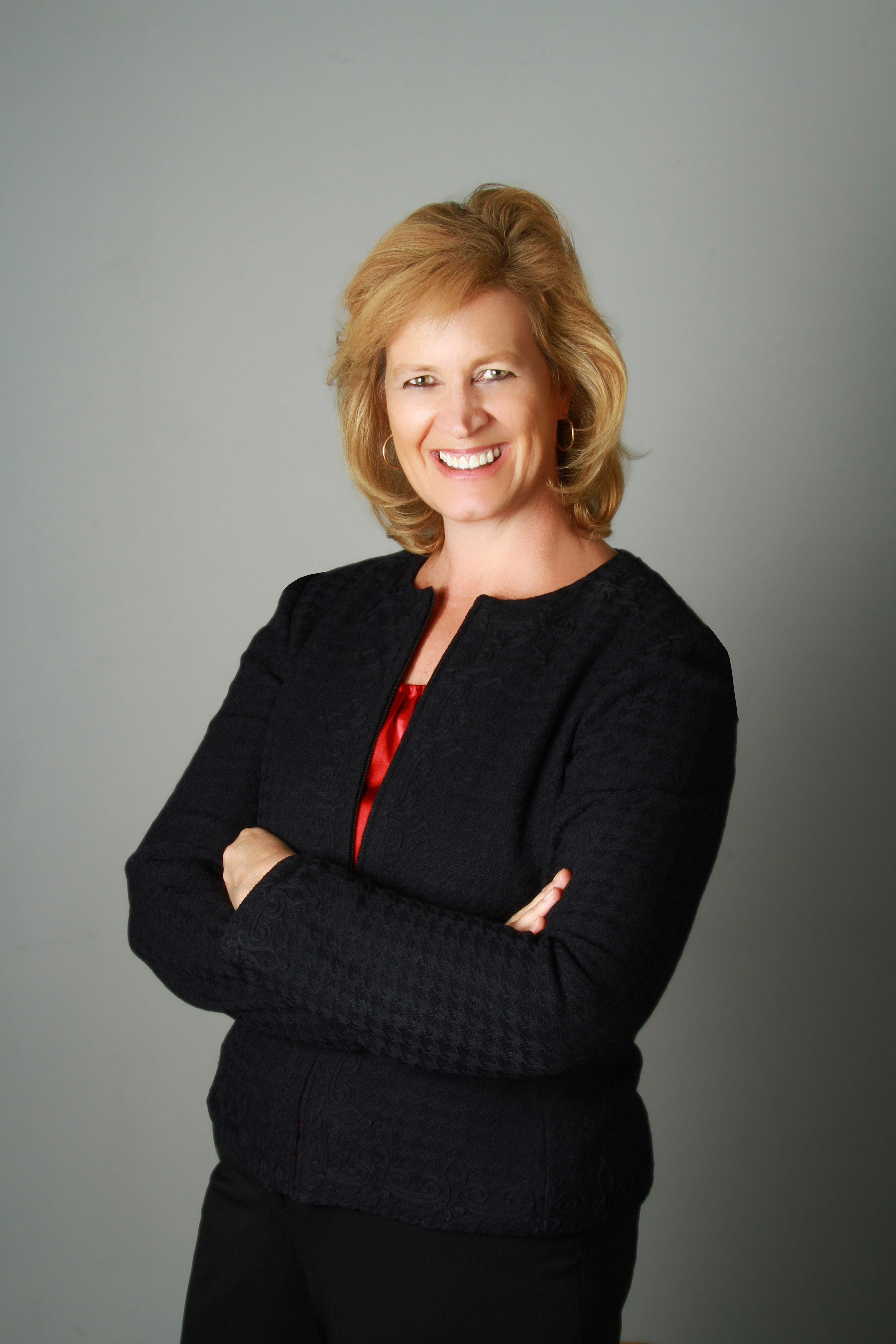 When Janet Kennedy arrived in Canada to take on the role of president of Microsoft Canada, she told CDN that this is her “dream job.” As the face of Microsoft in Canada, Kennedy has one main mission: to transition Microsoft and its channel to the cloud.

After a full year on the job, the Purdue University graduate has worked through a litany of changes at the Canadian subsidiary. She told the Canadian partner ecosystem not to build solutions in a silo anymore and instead integrate big data, social, mobile and look for holistic solutions.

The big piece for most solution providers selling the Microsoft stack is that everyone will have a score card that will be based on cloud consumption in Azure and Office 365. The old licensing sales model will not be a factor anymore.

One of the key things is the better the performance with Azure and Office 365 the more likely Microsoft will invest in your business.

Read more: Microsoft channel changes and how they impact Canada 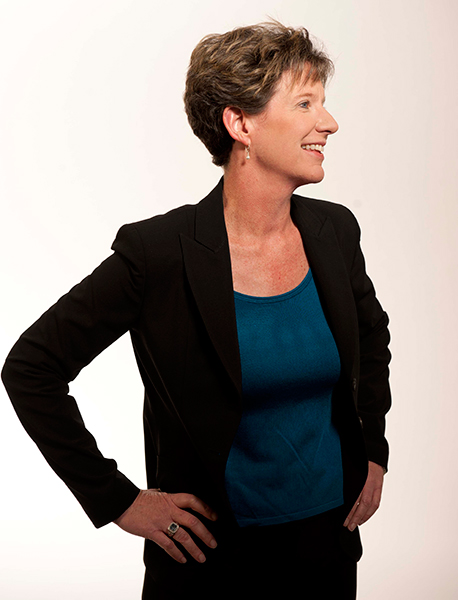 Most people are surprised to learn that Simply Accounting was developed in Richmond, B.C. One of the leading brands in software was acquired many years ago and is now one of Sage Software’s flagship products. Nancy Harris’ role at Sage is to build the Sage brand and grow market share in the country by driving the strategy and day-to-day operations for the small business portfolio that also features Sage 50—Canadian Edition and Sage One—Canadian Edition.

Harris lives in Richmond even though she has a North America role with Sage. She was recently appointed vice president and GM of Sage Simply Accounting. One of her mandates is to cultivate an exceptional customer experience for Sage’s partner channels and small business customers.

Connie Certusi, executive vice president at Sage, said Harris brings an entrepreneurial spirit that will resonate within the Sage Simply Accounting community of partners and customers. 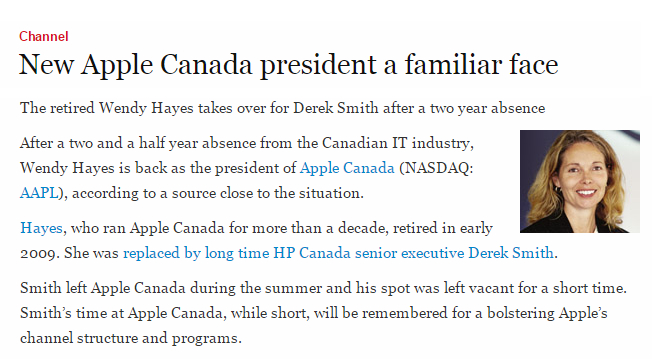 Apple Canada is leaving their home in Markham, Ont., after more than 30 years for a swanky new downtown Toronto office. Leading this exodus is Wendy Hayes, senior managing director of the Canadian subsidiary. Hayes returned to lead Apple Canada after a two and a half year absence from the Canadian IT industry.

Hayes ran Apple Canada for more than a decade and retired in early 2009. While Apple may not be the friendliest of computing vendors for the channel, they do have a significant Mac dealer network across the country. Hayes’ strengths are strategic planning, sales and marketing along with channel distribution.

Hayes is also a senior board advisor for CEO Global Network, a group dedicated to improving the success and lives of CEOs, their families and companies through networking, mentoring/coaching and a supportive advisory group. 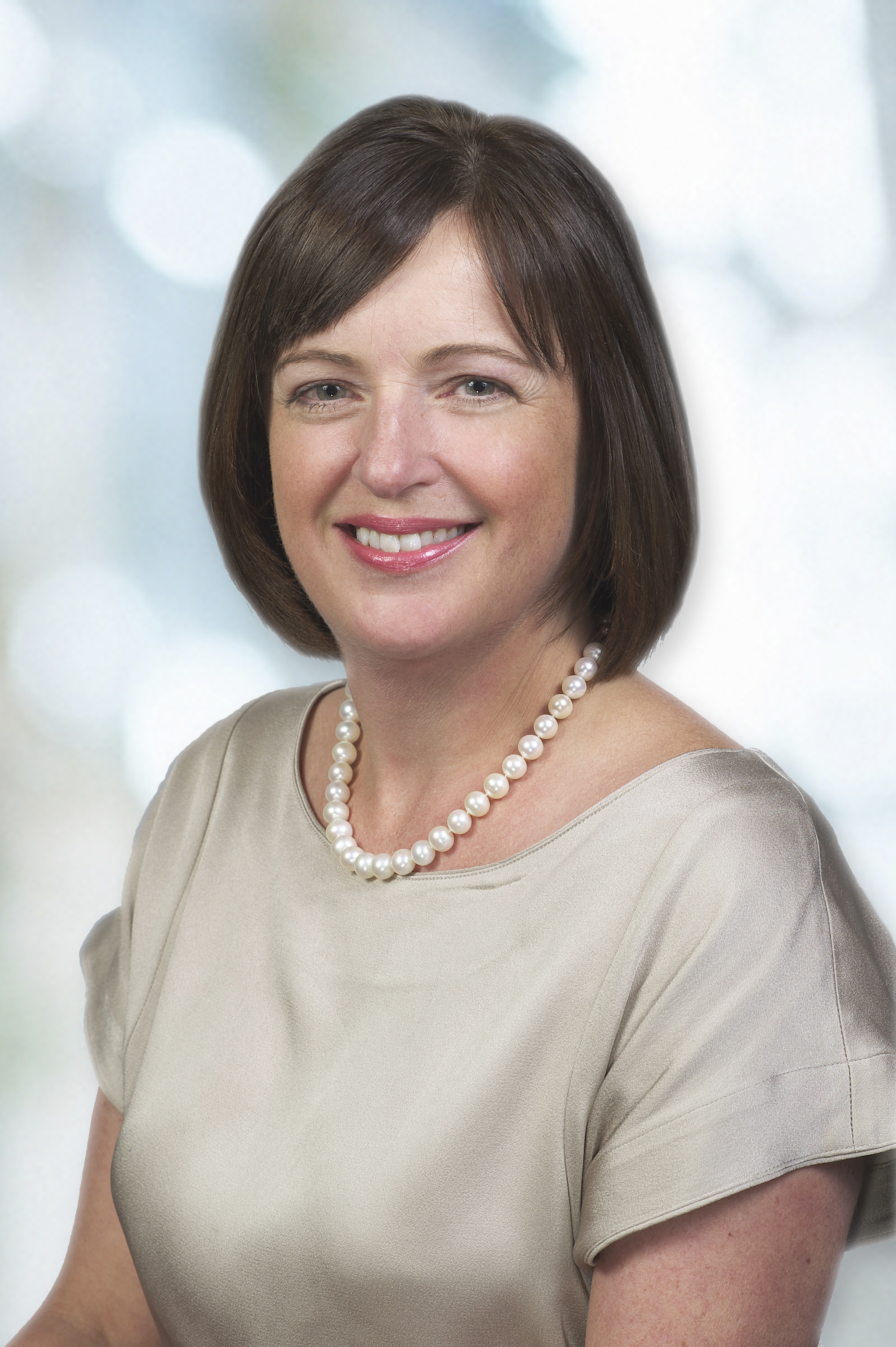 Mandy Shapansky is responsible for all Canadian business operations for Xerox including finance, customer service, marketing and sales.

As the former CFO of Xerox Canada, Shapansky usually is a staple on most Top 100 Women’s lists in Canadian business and there is no surprise that she, again, makes the CDN list of Women in the IT Channel Ecosystem.

Shapansky has been praised for her customer-first management style learned from Anne Mulcahy, the savior of Xerox. Shapansky has enabled Xerox Canada to consistently grow its revenue and market share, while capturing significant recognition such as being named one of Canada’s Top 100 Employers for best practices in inspiring and valuing employees.

The University of Waterloo alum also serves as a director on the boards of Catalyst Canada, the Conference Board of Canada and the Canadian Manufacturers and Exporters’ (CME) Manufacturing Council of CEOs. 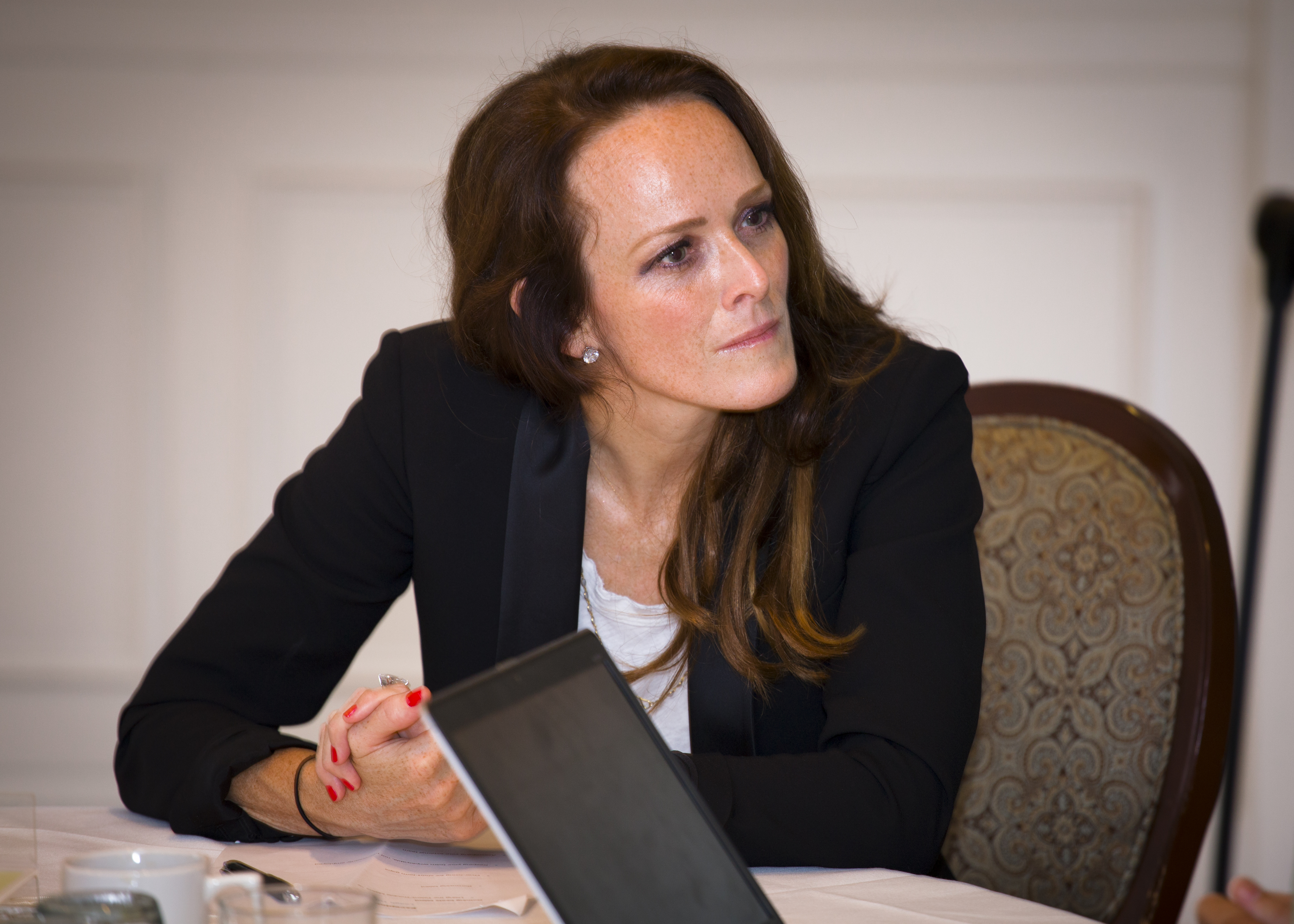 Leagh Turner has been called Bob Elliott’s right hand woman. Elliott is the president and CEO of SAP Canada.

In the COO’s role, Turner is focused on operations, coordinating the company’s cross functions in the pursuit of unified customer demand strategies, increased pipeline and sales, and, ultimately, happier customers. She leads a comprehensive portfolio of teams including value and solution engineering, marketing, as well as the industry solution group.

The University of Western graduate also spearheaded the opening of a new data centre for SAP in Markham, Ont. this year.

Read more: Inspired at the CDN Women in the IT Channel Recognition Luncheon 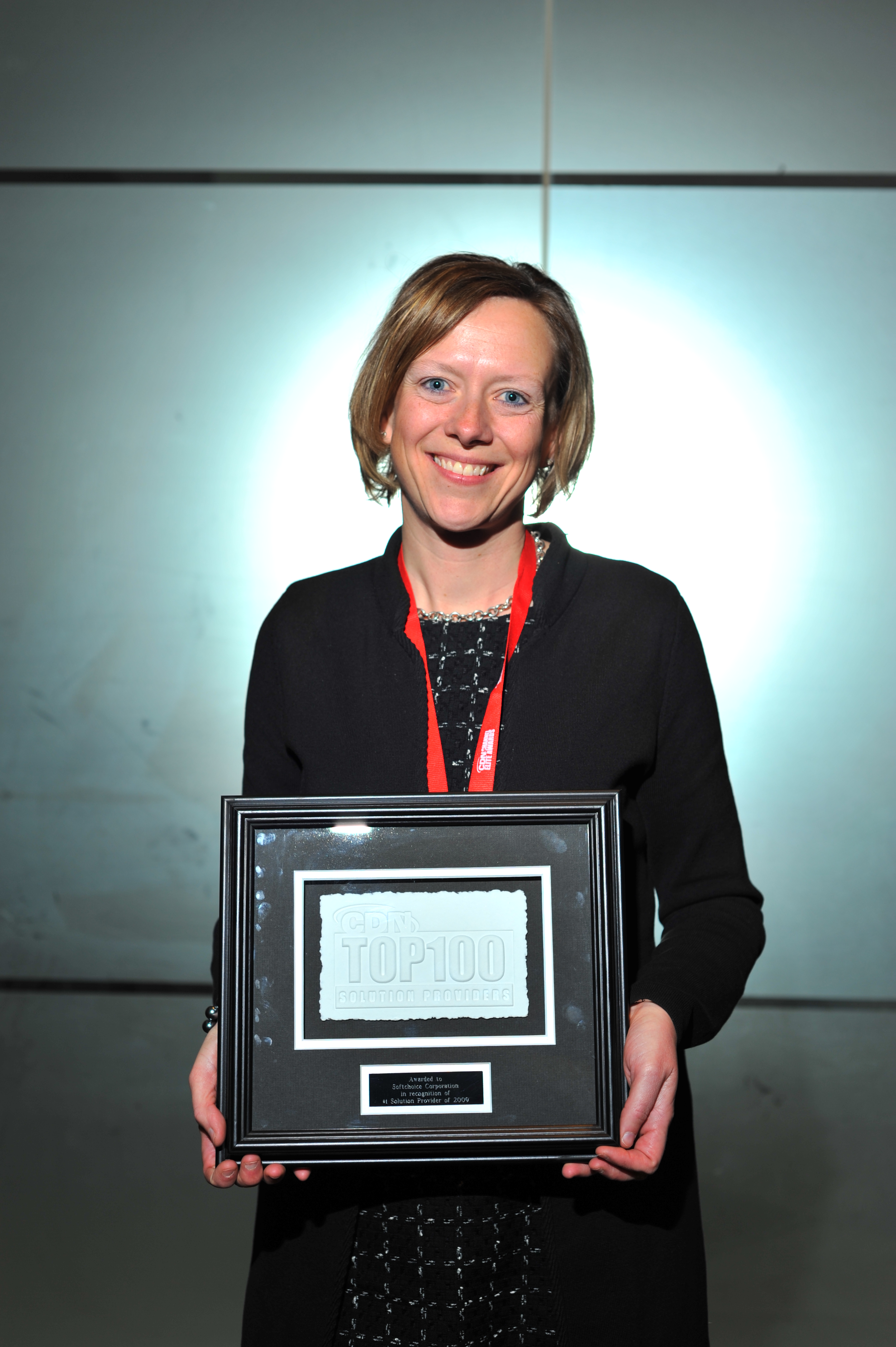 Most people know Nicole Wengle from her days as a senior leader at Softchoice, who routinely claimed the No. 1 position on CDN’s Top 100 Solution Providers list. Wengle left the organization she called home since 1997 for a new challenge as the vice-president and country manager for F5 Networks Inc. F5 Networks is a high profile application delivery networking vendor based in Seattle, Wash.

In 2014, F5 Networks had another solid year as customers and channel partners responded favourably to its Synthesis architecture, the array of new products the company rolled out in 2013. The company is currently expanding its portfolio of security offerings with the launch of WebSafe and MobileSafe anti-malware solutions. New to the list and new to the Canadian market is Bernadette Wightman, the former GM of Cisco Russia.
Wightman became the first woman president of Cisco Canada on Nov. 24 replacing Nitin Kawale who left the subsidiary after six years to be the new president of Rogers Enterprise Business Unit.
Not much is known about Wightman, but she did lead the sales organizations in developing markets for Cisco in countries such as Ukraine and Kazakhstan.
Wightman does have significant channel experience, having run the channel and commercial sales teams for Cisco’s Emerging Theatre. According to the company, the Emerging Theatre is the largest Cisco commercial theatre outside of the Americas. It covers 84 countries and more than 10,000 channel partners.

SUBSCRIBE
Previous article
In photos: the grand opening of the Microsoft Store at the Eaton Centre
Next article
CDN Women of the IT Channel Ecosystem 2014: Trusted Advisers