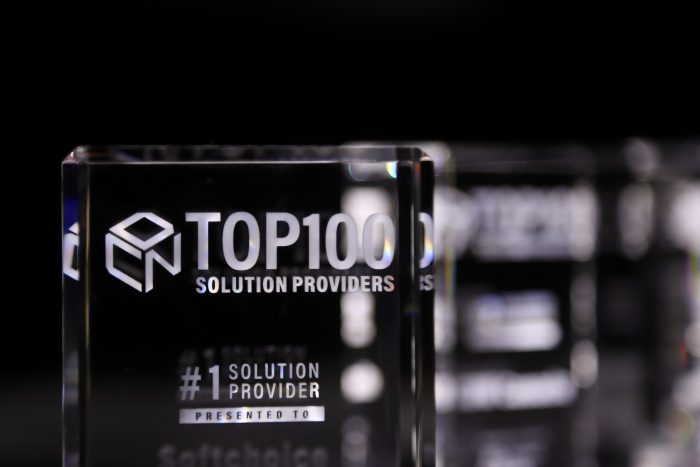 TORONTO – Once again, CDN reached out to solution providers across Canada to collect some important data. The data helped us produce an industry benchmark report, our Top 100 rankings, and an interactive map of the partners across the country. All of this activity culminated in a gala event in Toronto, where more than 200 people showed up to celebrate the channel’s achievements in 2018. The top two solution providers, Softchoice and CDW Canada, breached the $1 billion mark for the first time, and a slew of newcomers helped raise the bar by elevating the barrier to entry on the list to $6.5 million. If there was any doubt about the channel’s ability to innovate and sustain itself in a world where customer buying habits have changed dramatically, those fears have been quelled. (Drag each slide to the left to skip to the next one, or click on the red buttons below).

Everything CDN Top 100-related can be found here

Prior to the gala event, CDN hosted a number of workshops sponsored by Avaya Holdings Corp. and Veeam Software. Our very own CIO Jim Love and president of ITWC Fawn Annan held a presentation about how to follow through on leads during a time when people are reluctant to pick up the phone. 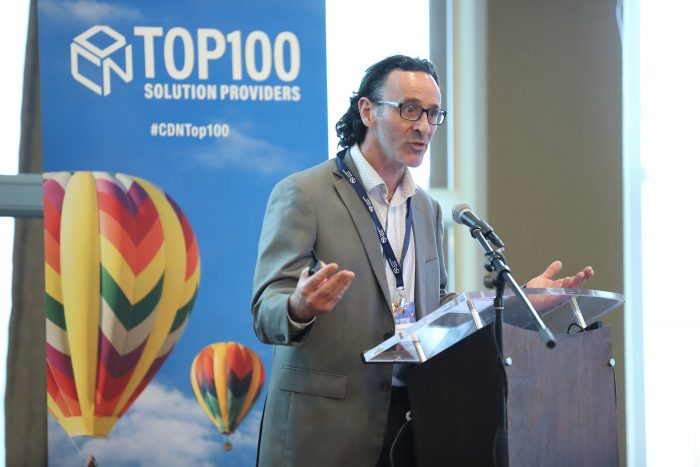 David Petramala, sales director with Avaya Cloud, kicked things off with a discussion about how to use cloud effectively. IDC’s 2017 Cloud Impact report says cloud usage jumped by 300 per cent in one year. This spike has largely been driven by SMBs aggressively migrating their workloads to the cloud, he says, in addition to the increased use of mobile devices by millennials and Gen Z-ers. Petramala also pointed to research suggesting 70 per cent of interactions today are through mobile devices. 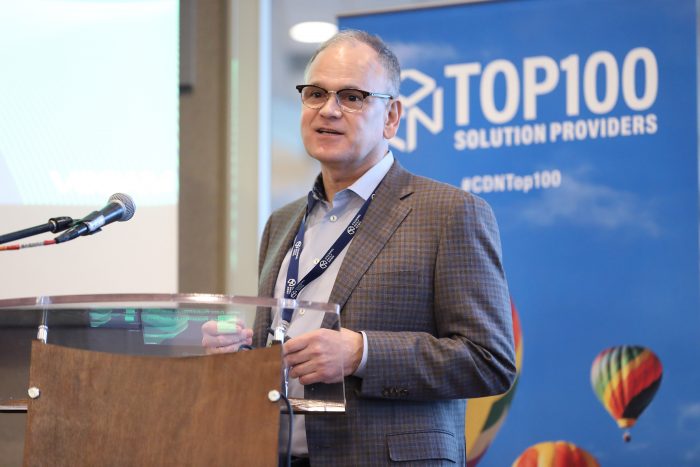 Next up was Andrew Close, director of systems engineering for Veeam Software, who shared some insights about data protection. One in four servers suffer at least one unplanned outage each year, he told everyone. “Hardware is getting better, but it still fails at some point,” he explained.

Veeam research also says that three out of four organizations admit they have a protection gap. This is an opportunity for partners to step up, says Close.

“If you help customers understand the criticality of their data, that’s a differentiator for a partner,” he says. “Also don’t treat backed up data as one solution area…weave data protection into other practices.” 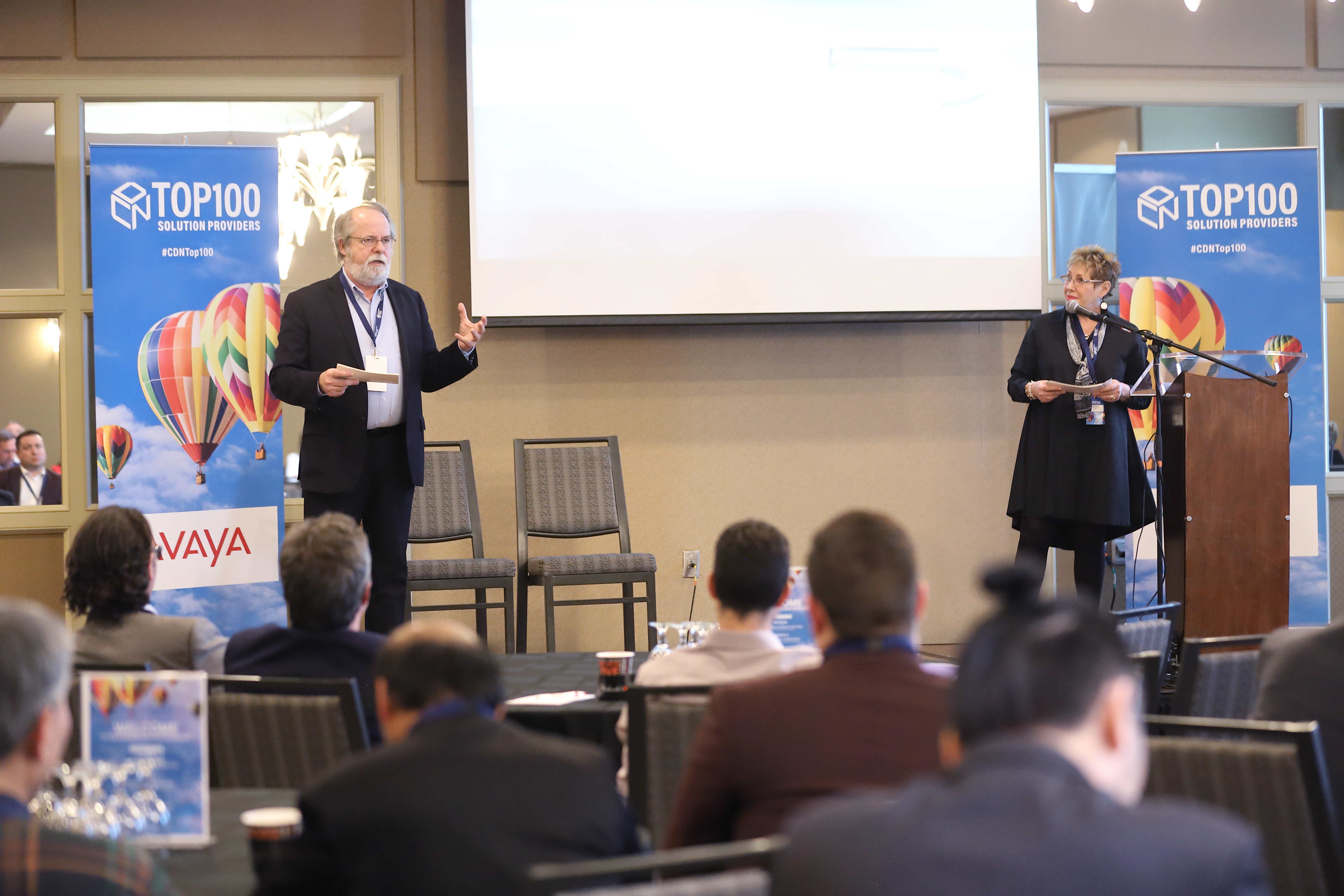 Our very own CIO Jim Love and president of ITWC Fawn Annan held a presentation called The Secret of Lead Generation, went over how to follow through on leads during a time when people are reluctant to pick up the phone.

Building client relationships is a long road, the two explained. “And content plays a huge role,” says Love. Partners need to build brand credibility and trust and keep regular contact with potential customers. They also have to respect their intelligence. It’s well-known that 60 per cent of the buyer’s journey is completed before they talk to a sales person.

“Content is an important tool in your arsenal,” says Annan, adding it’s got to span the buyer’s journey. Content includes blog posts, videos and social media campaigns. Companies that excel at lead-nurturing generate 50 per cent more sales leads at a 33 per cent lower cost. 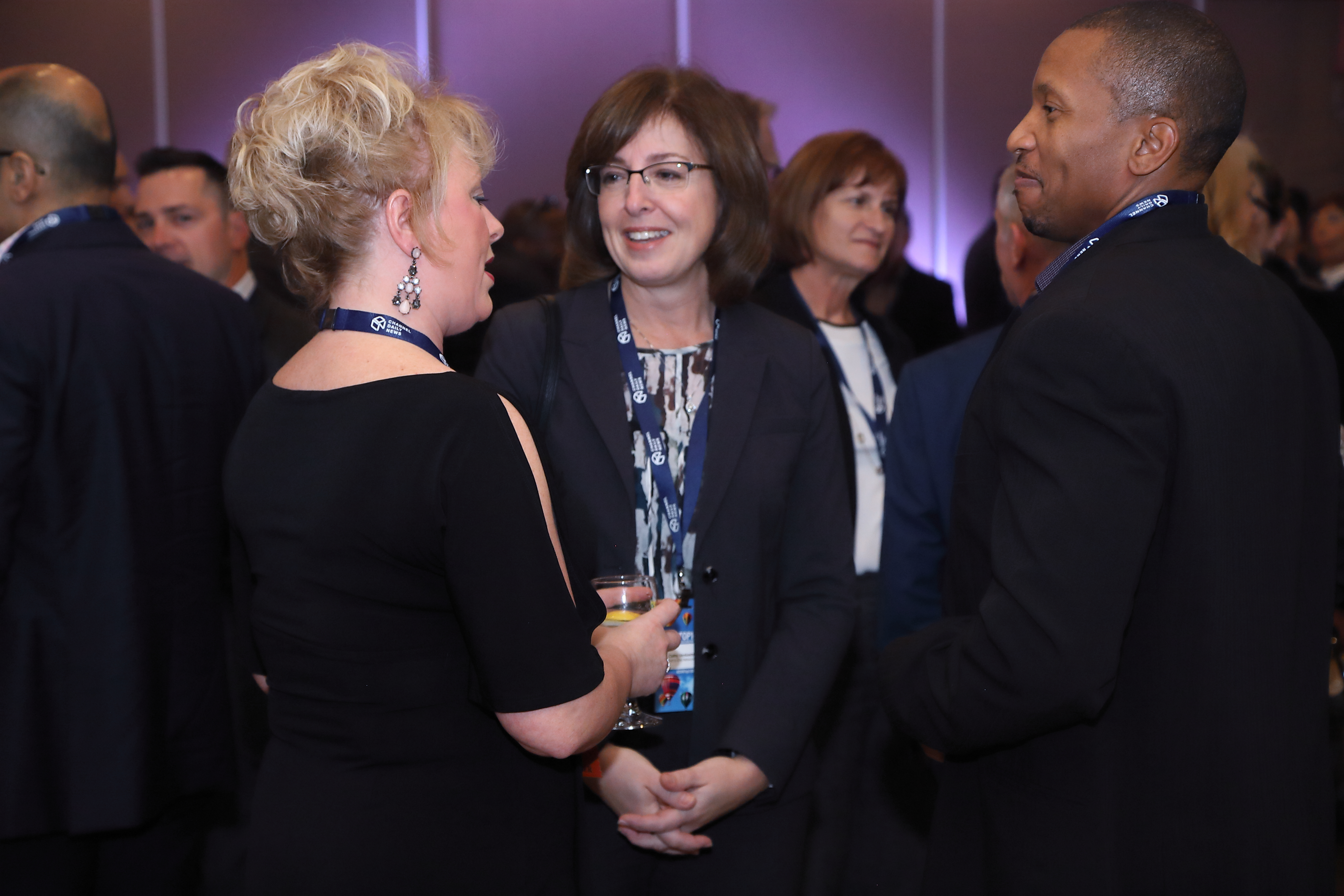 More than 200 people walked through the doors of the event Wednesday, with the theme being “Sky’s the limit.” The barrier-breaking, $1 billion-mark crushing and innovative thinking on display from partners in 2018 inspired CDN and ITWC to lean on the idea of a hot air balloon breaching the clouds in the sky. There was even a hot air balloon basket on stage provided courtesy of Not Just Hot Air, Toronto’s only hot air balloon flight company. 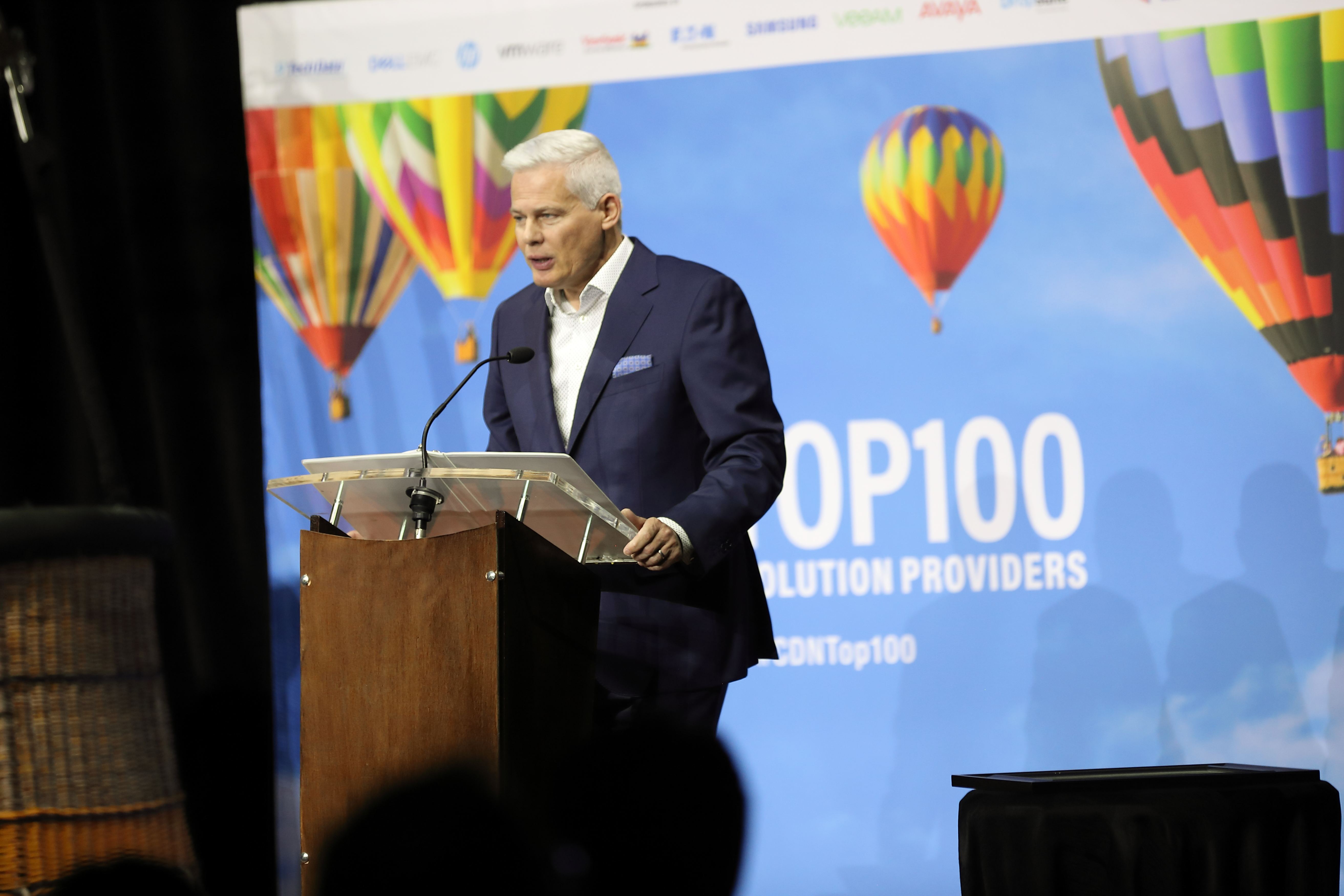 This year’s lifetime achiever has led the Canadian divisions of two tech giants, delivered keynote speeches in front of thousands, and was even involved once upon a time in the project that gave birth to our Federal Government’s dot-GC-dot-CA domain.

Michael Murphy, a James Bond super fan and a multiple CDN Newsmaker award winner, was a major player in the security space and watched the Canadian channel navigate some of the world’s most dangerous computer viruses, and emerging technologies. He was the former country manager for Symantec Canada, a post he held for most of his career before moving on to a similar role with Citrix Canada. He was also Symantec’s Canadian MVP award winner in 1999.

During his time at Citrix Canada, Michael Murphy helped open a brand new Canadian office. He also helped to make the Canadian operation more of a cloud player than ever before, and strengthened its relationship with Microsoft.

After a tribute video that included comments from half a dozen of Murphy’s peers in the channel, Murphy took to the stage to accept his award, and thanked the people in the room for all their support over the years. 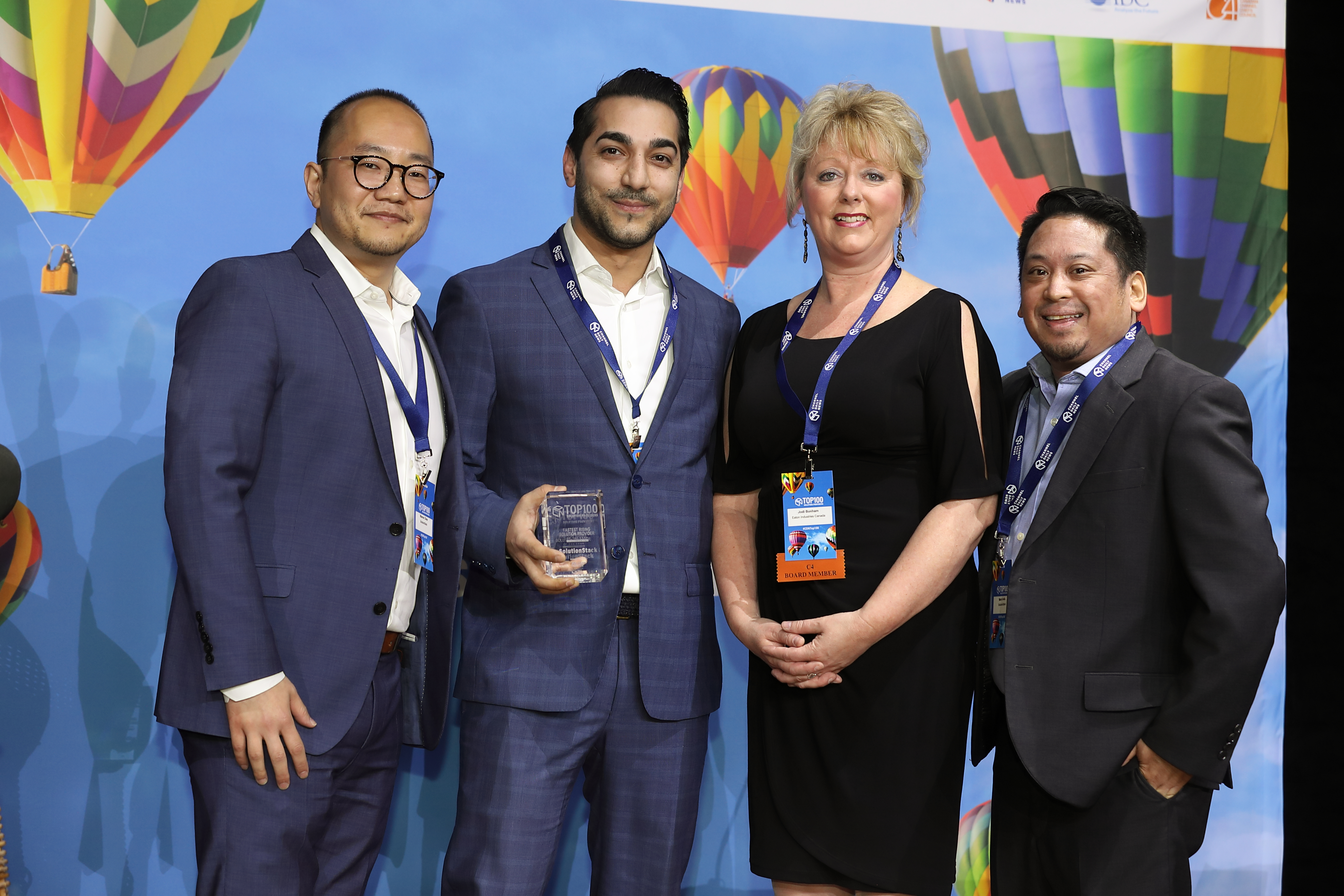 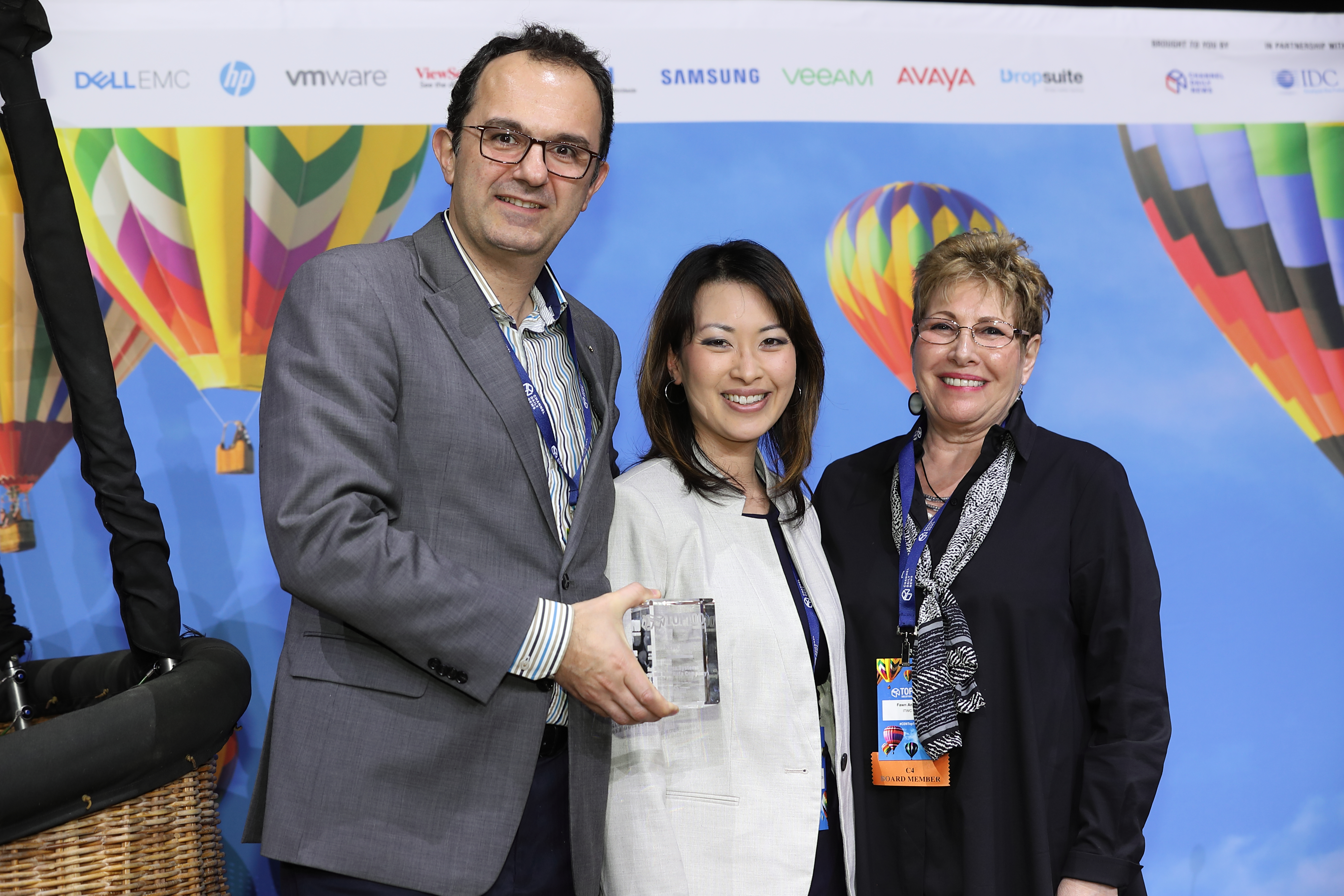 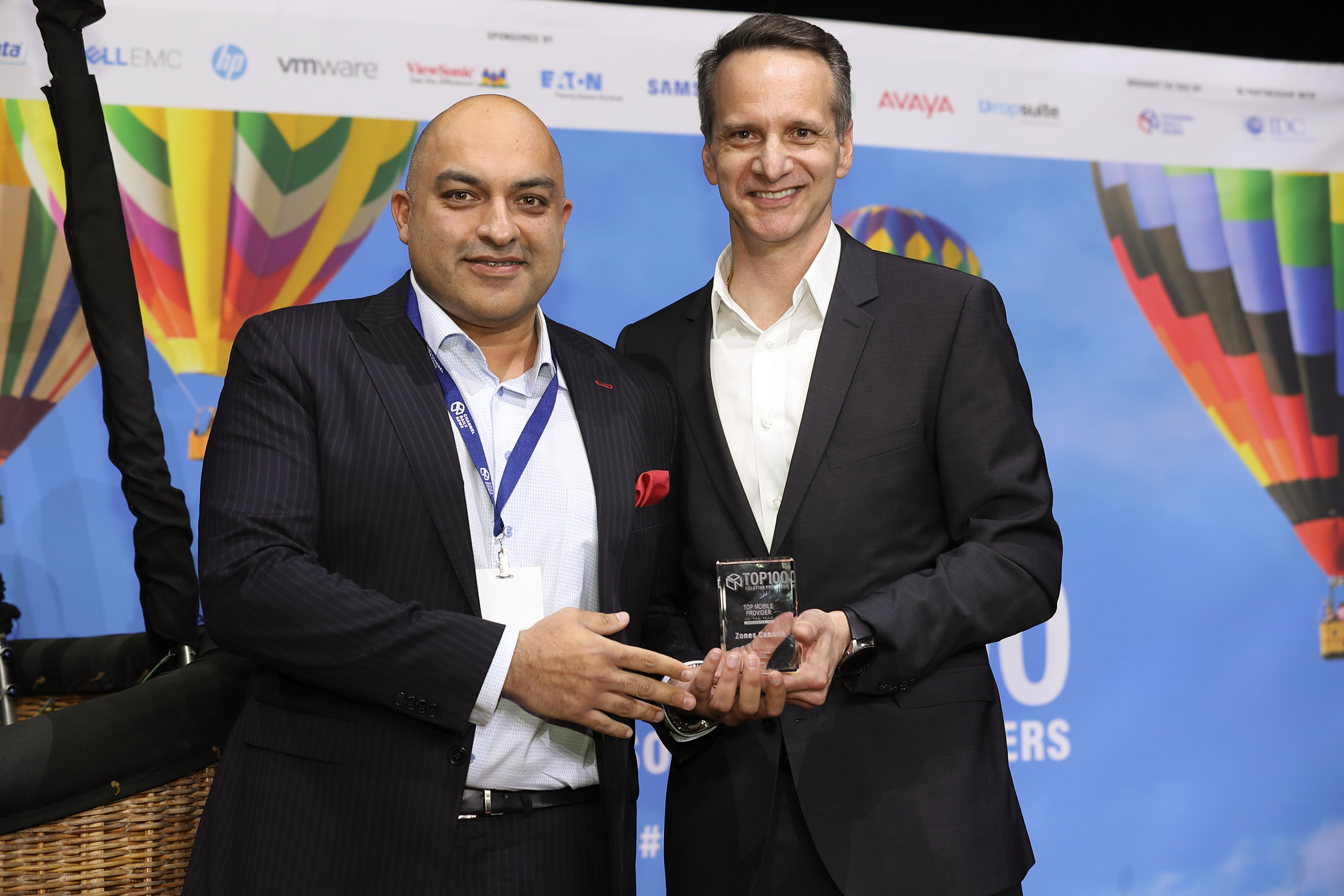 Galasso accepts the #5 Solution Provider of the Year Award on behalf of Onx Enterprise. 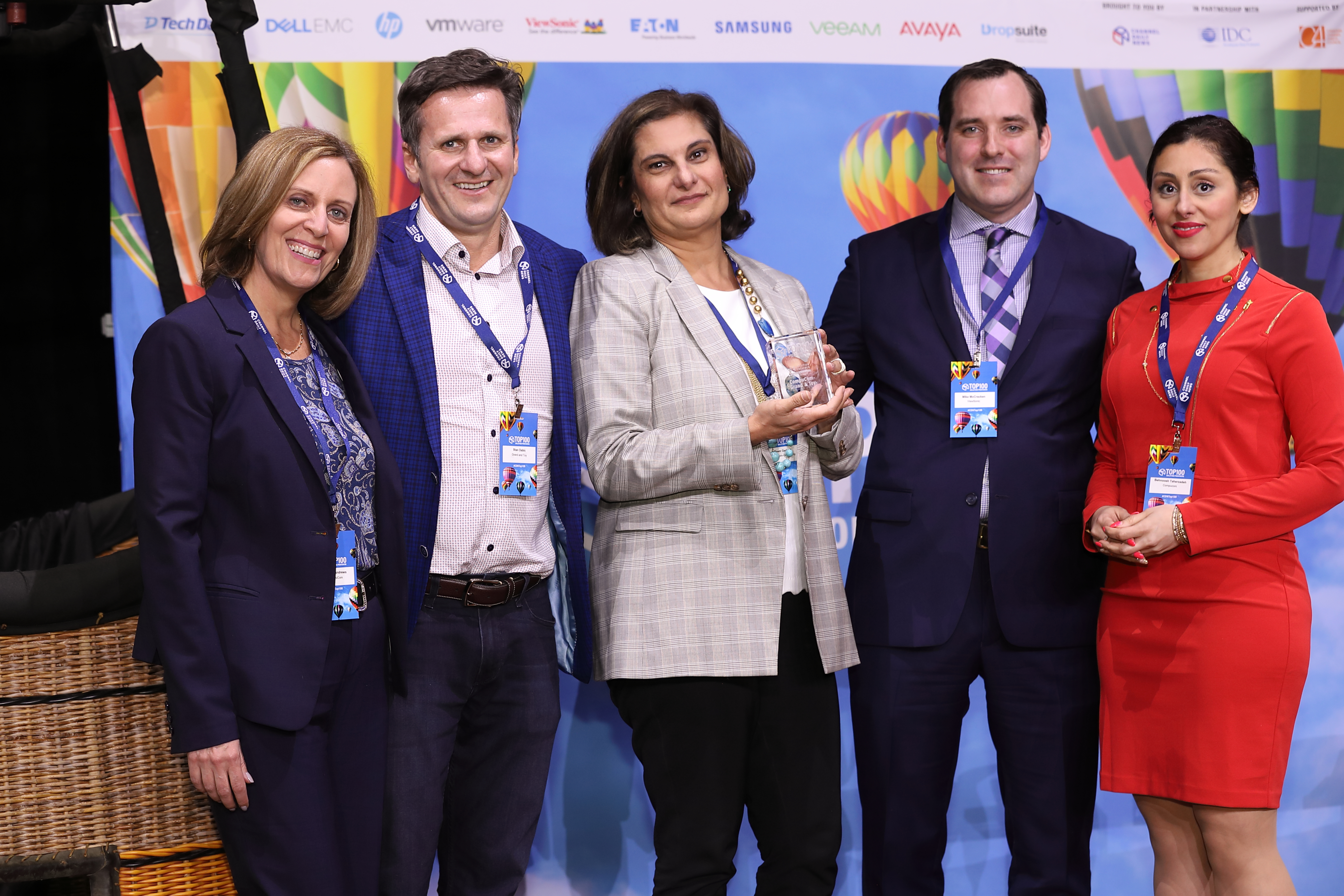 ViewSonic Canada regional sales manager Mike Mccracken hands the #4 Solution Provider of the Year Award to Reem Gedeon, CompuCom-Grand & Toy senior vice-president of sales. Others from her team joined her on stage. 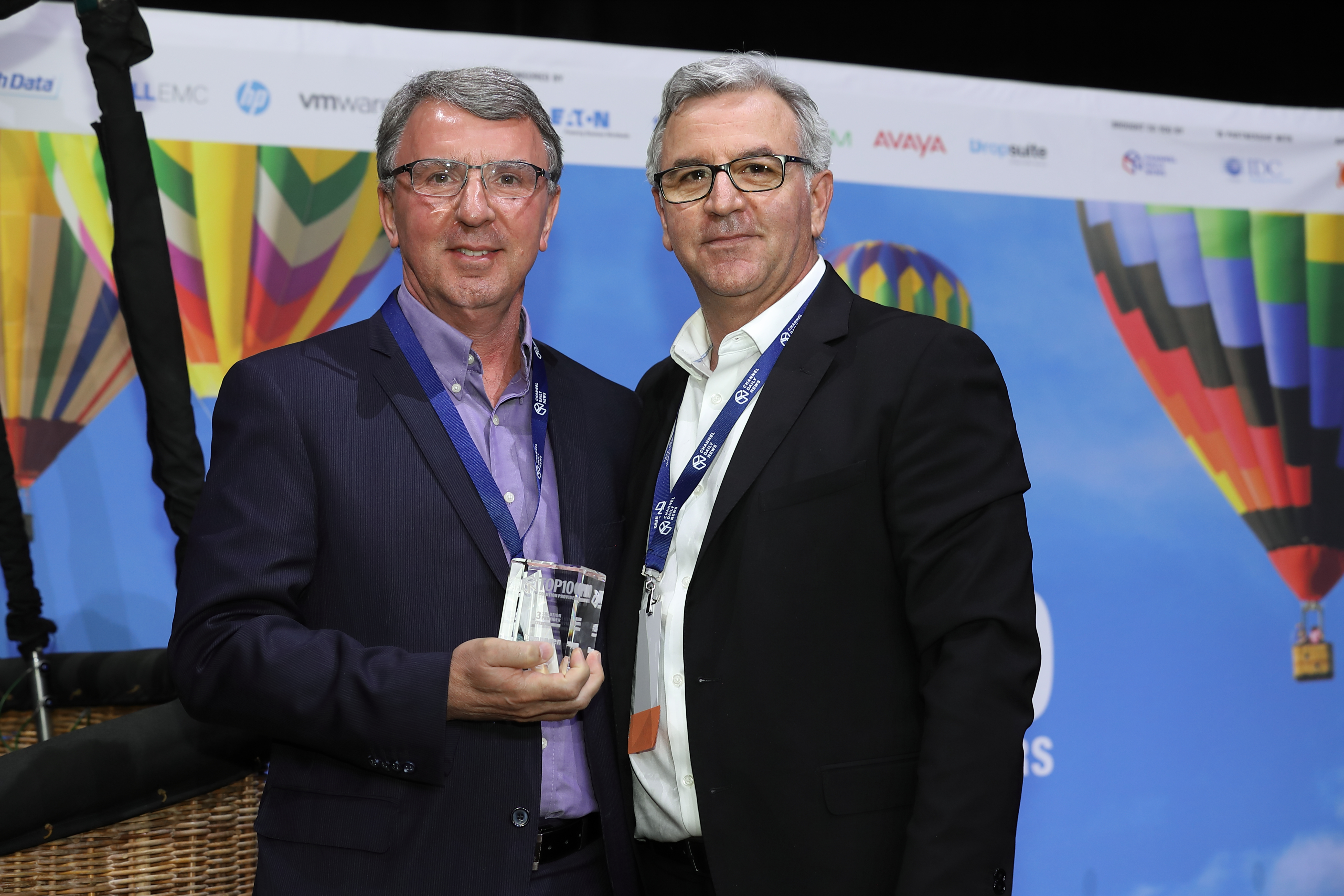 The #3 Solution Provider of the Year Award went to Compugen. Presenting the award is John Cammalleri, vice-president of commercial channels for HP Canada. Accepting it is Lou Tetsos, Compugen’s national director of data centre and cloud. 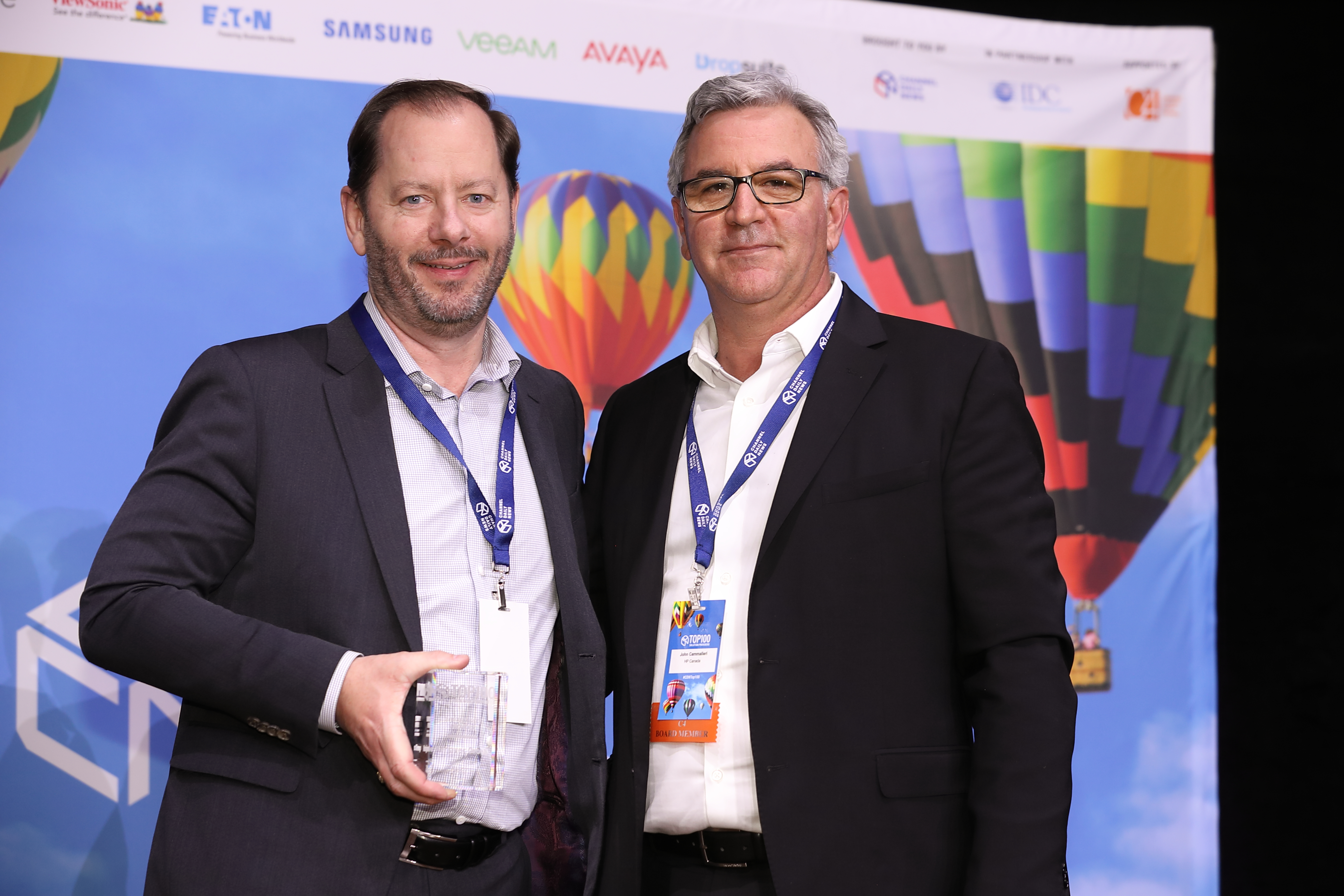 Cammalleri also presented the Security Solution Provider of the Year Award to Sean Higgins, co-founder and vice-president of professional services. 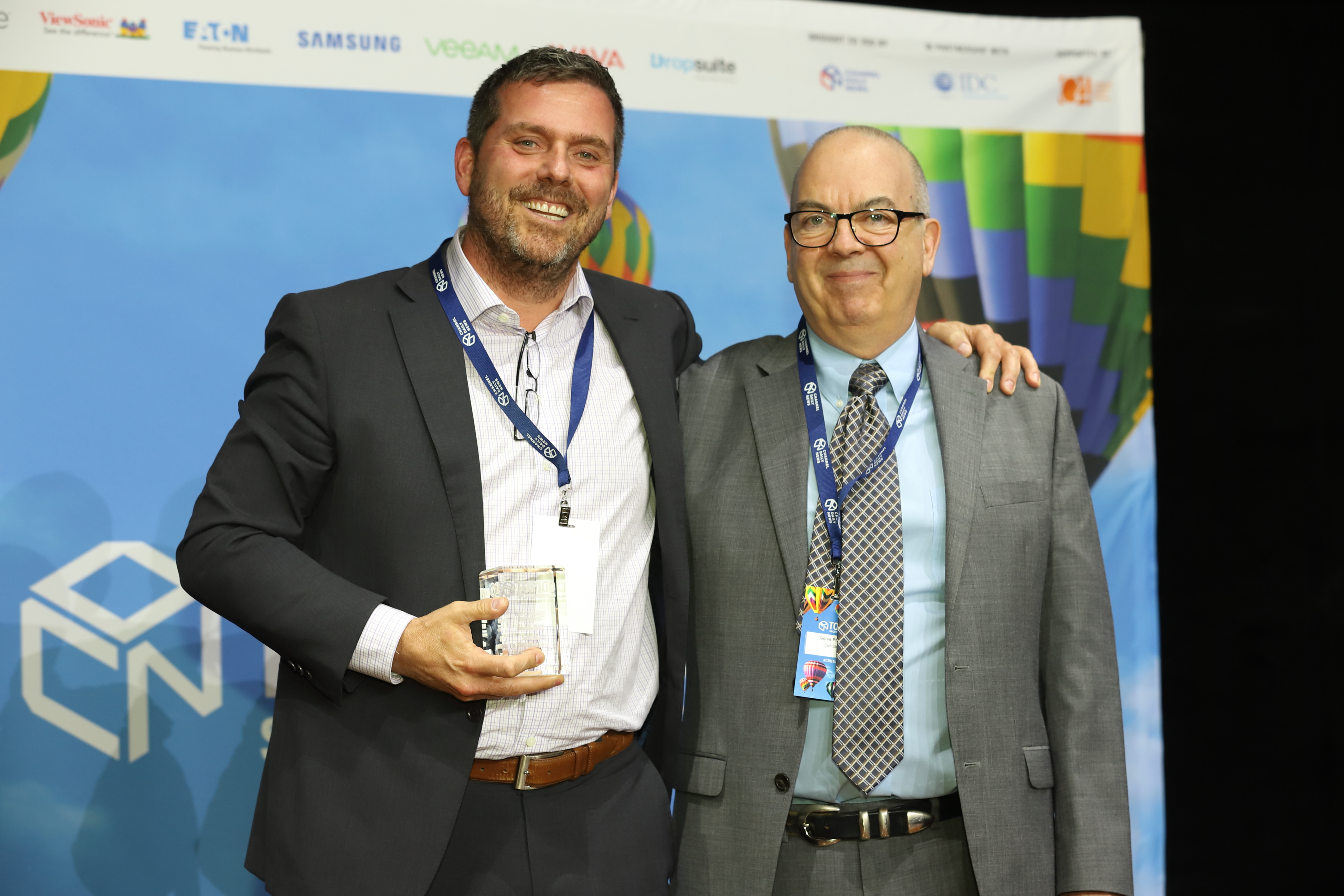 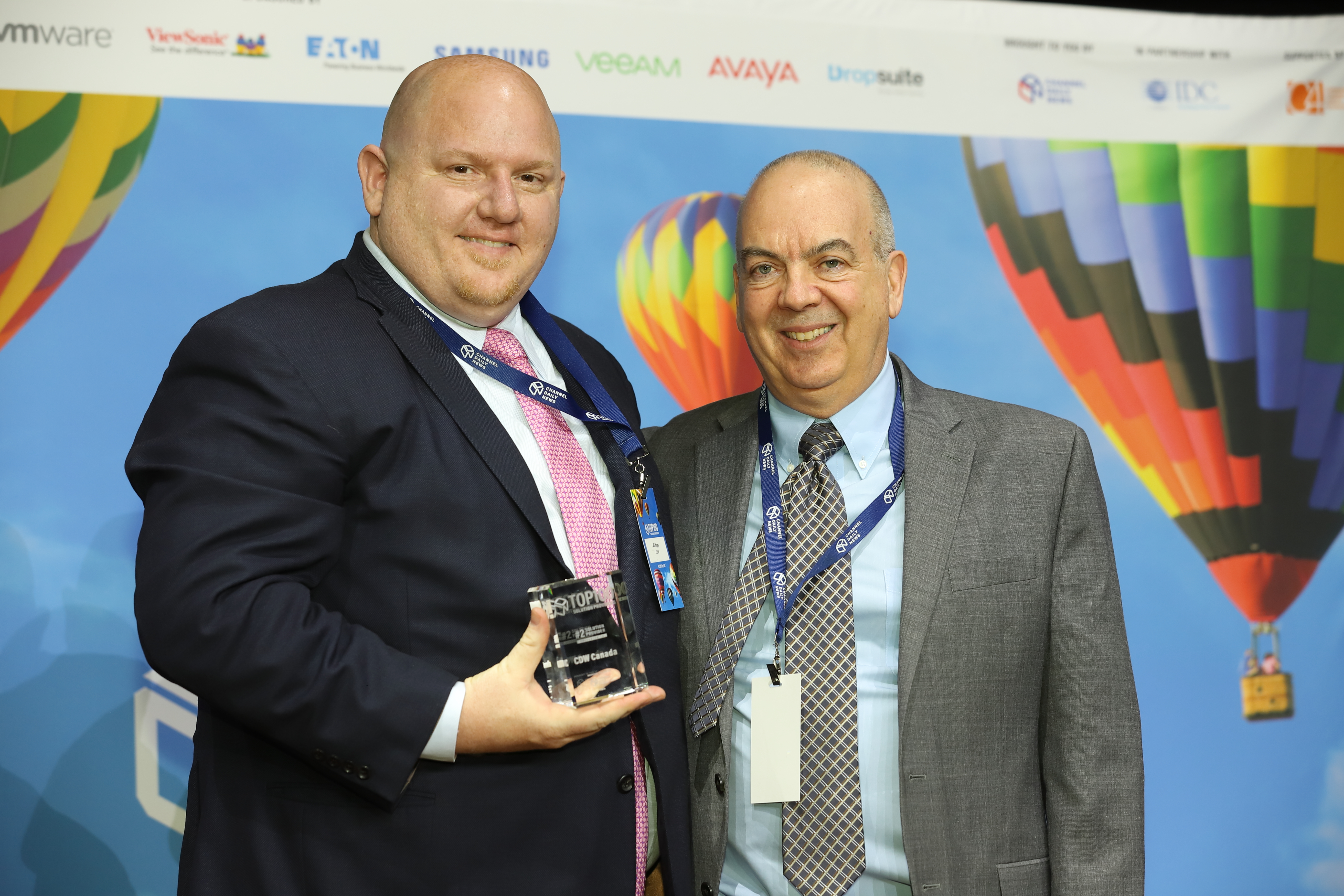 Philippe also presented the #2 Solution Provider of the Year Award to J.D. Hupp, vice-president and general manager of CDW Canada. 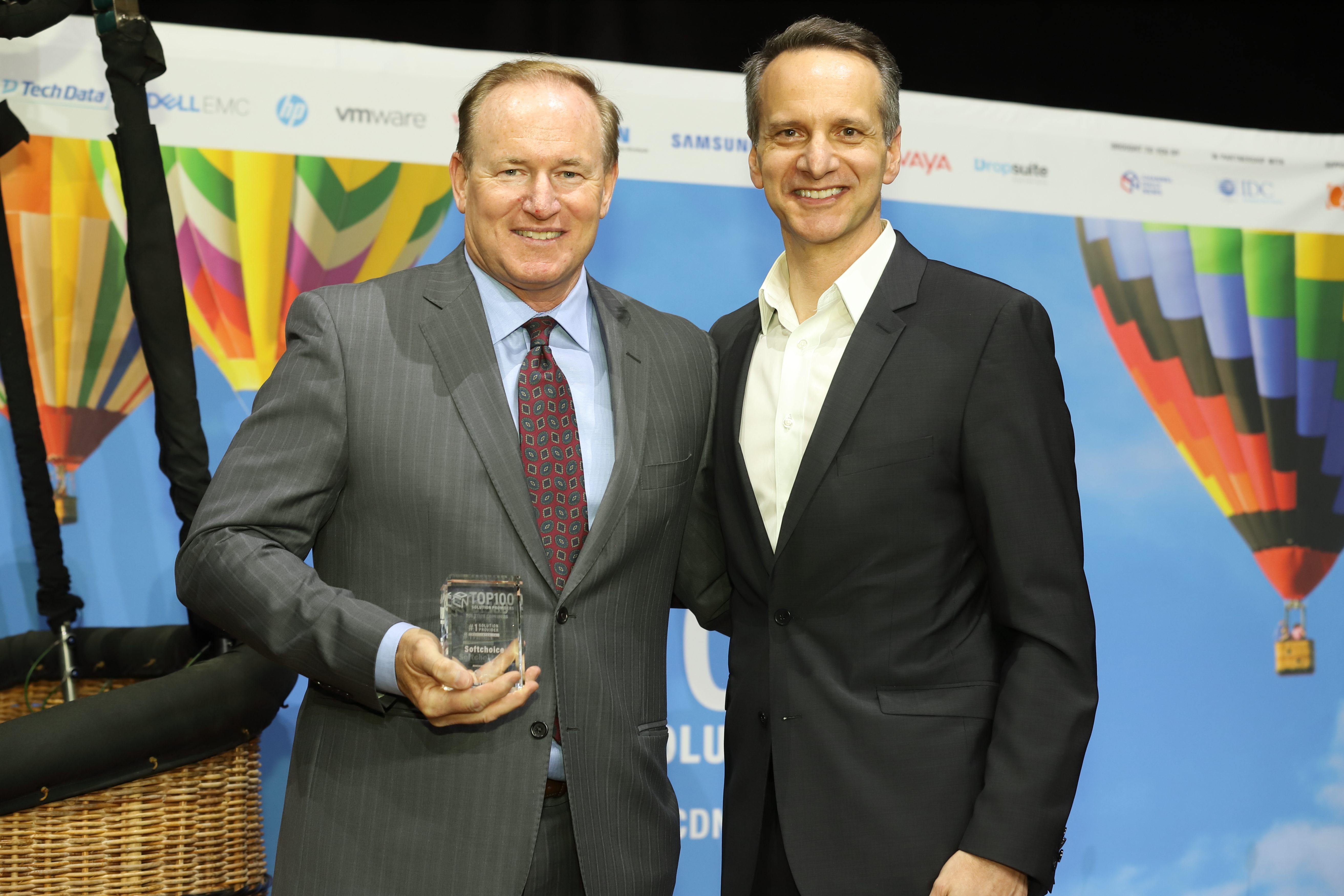 Galasso returned to the stage one more time to hand out the top prize – the #1 Solution Provider of the Year Award to John Husband, to vice-president of sales at Softchoice.