BlackBerry Passport is $200 on two-year plan with Telus

The Waterloo, Ont.-based handset maker held three launch events for the square-shaped Passport in Toronto, London, and Dubai today, with CEO John Chen attending the event in Toronto to demonstrate how the phone will appeal to enterprise users. The phone is set to land in the U.S. and 30 other countries before the end of 2014, Chen said.

While he didn’t talk too much about BlackBerry’s road map or strategy, he did say he feels the company is moving forward, with the company’s restructuring process now over.

“We’re done with that now and focusing on growth,” said Chen. 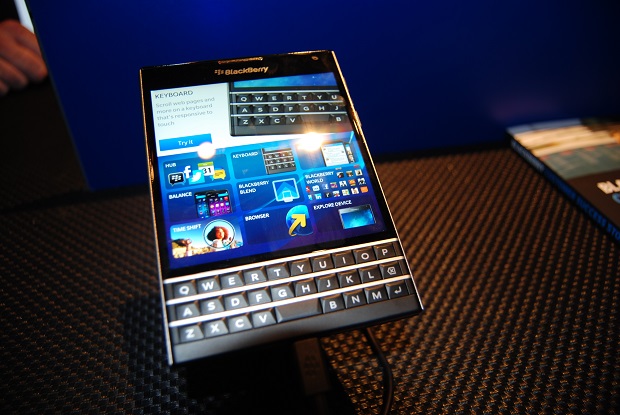 On stage, Chen said he actually wasn’t sure why the phone costs more here in BlackBerry’s country of origin. However, he did say the company is trying to cement itself as a Canadian business – one reason why it brought hockey legend Wayne Gretzky on-stage to talk up the brand.

“We’re determined to win our whole country back, so this is one of our first moves to do that,” he said.

While there had been some anticipation for a potential unveiling of the BlackBerry Classic, Chen only pulled out the phone briefly from his jacket pocket and promised more details to come by the end of the year.

BlackBerry is determined to show it’s making gains in the smartphone market, though the embattled company has been forced to concede more and more ground each year in terms of market share and user adoption.

That doesn’t mean BlackBerry is trying to land wins in the consumer market, where Apple and Samsung dominate the competition – but it is trying to win back enterprise users who want data security and productivity bundled in with their mobile devices.

However, one of the questions that remain is whether BlackBerry’s strategy of trying to reach business users will pan out, given many business users are now bringing their consumer devices into the workplace.

BlackBerry’s answer to that comes in the form of BlackBerry Blend, a new feature that will allow users to share documents between devices. It also gives them access to their personal and work emails, BBM messages, text messages, and calendars, and it is compatible not only with BlackBerry devices, but with Macs, iPads, PCs and Android tablets. During today’s event, the company announced it would also be available starting today, alongside the Passport.

“I think this is perfect … This allows the consumer [and] professionals the choice when they go into the IT shop,” Chen said, in a brief interview with ITBusiness.ca after the event. “This fully supports [bring-your-own device] or corporate-issued devices. Our software is agnostic, with so many different operating environments. I think this is a really good first step towards being in that world.”

BlackBerry is also hoping the Passport will appeal to users in industries like healthcare, finance, utilities, and construction. In a brief demonstration on-stage, the company showed how Claron Technology Inc., a company that provides medical image processing solutions, has built Passport-friendly apps for doctors. For example, doctors would be able to use the Passport to access electronic medical records, or to show MRI scans and ultrasounds to their patients.