Lenovo unveils a ton of new products for Fall

At the start of the IFA show in Berlin, Lenovo unveiled a slew of new products that include a new set of Yoga video tablets, new phablets and a smartphone with a first-ever dual selfie camera.

Highlighting this round of new product releases is Lenovo’s new category of video tablets under the Yoga brand name. Showcased in Berlin were the Yoga Tab 3 Pro and the Yoga Tab 3, which are designed as video tablets to provide users with multimedia experience while retaining a multimode device design.

For example, the Yoga Tab 3 Pro features a built-in 70-inch projector and is optimized for the Netflix online content service. The Yoga Tab 3 Pro also has four front-facing JBL speakers, and a first for Lenovo, a virtualized Dolby Atmos experience over built-in speakers that creates a sensation of sound moving in all three dimensions around the listener. 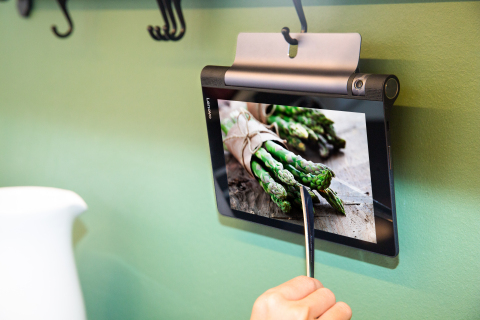 Jeff Meredith, GM and VP of Lenovo’s Tablet Business Unit, said today’s tablet market is largely dominated by general-purpose devices. The company knows from research that a tablet today is a consumption device and most frequently used for watching videos of all sorts. The latest YOGA Tab 3 series represents the epitome of entertainment for users on the go and home alike, realizing a whole new level of visual and auditory experience never before possible on a tablet platform.

The tablet’s optimized projector placement and is a 180-degree rotatable to beam life-sized images onto a wall or ceiling. At 299 pixels per inch, the onboard 10.1-inch QHD (2560×1600) screen is able to render richer colors with its Smart Display technology.

The Yoga Tab 3 Pro has been assembled with materials such as aluminum and a leather-like fabric back and it has a splash-proof balance for a different user holding experience.

The Yoga Tab 3 Pro video tablet comes loaded with Smart Window 2.0 that allows users to run a background app as well as two Windows on top, with added phone-type apps on one screen. It also supports LTE.

At this head of this of products is the new Moto 360 Collection under the Motorola. The new Motos have been ungraded with:

Lenovo also released the VIBE P1 smartphone with a 5000mAh battery, OneKey Power Saver and Rocket Charge. The new Vibe P1 has a fully-spec’d Qualcomm Snapdragon 64-bit Octa-Core processor, includes Near Field technology and a fingerprint reader. The units starts at $159 and go up to $249. These smartphones are not available in North America.

The VIBE smartphones sport a metal-and-glass design with a slender aluminum frame (measuring just 4mm along the sides), and a subtly curved rear metallic cover. The screen is made of Gorilla Glass 3, a thinner and lighter iteration of Corning’s scratch- and crack-resistant protective glass.

Lenovo’s third smartphone – the VIBE S1 – is for photographers and features an 8 MP primary and a 2 MP front camera that enables it to be a dual selfie camera smartphone.

“Selfies are now the most popular type of photos snapped on a smartphone, with over a million selfies taken a day and 48 per cent of that are shared on Facebook alone,” said Jerry Hsiao, Vice President of Lenovo Phone Product Management & Operations, Lenovo Mobile Business Group. 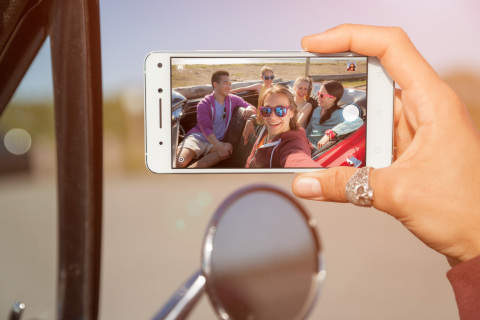 The VIBE S1 is powered by a 64-bit MediaTek Octa-Core processor and 3GB of RAM. With 160GB of storage (with up to 128GB of microSD external storage support), the VIBE S1 can accommodate around 40,000 photographs. It comes preloaded with an Android 5.0 Lollipop operating system. Users can view their selfies and photos on a 5.0-inch Full HD display and share photos with Lenovo’s star SHAREit app which comes preloaded. Finally, the VIBE S1 is capable of 4G LTE connectivity speeds.

Lenovo VIBE S1 will be available in Pearl White and Midnight Blue starting at $299.

The Tiny is back. The ThinkCentre M900 Tiny will be part of a new line of ThinkCentres that will also have the IdeaCentre Y equipped with up to 6th generation Intel Quad Core i7 processors. Both the IdeaCentre Y900 and Y700 are desktops that can accommodate future upgrade options as it has a chassis big enough to fit a full ATX motherboard and support power supplies up to 1000W. The Y900 also supports up to two graphics cards, all accessible via an access push lever that opens a semi-transparent side panel. An internal cable routing system keeps cables on the inside.

Lenovo has also created five custom accessories for these products. They are:

Lenovo did not stop there at IFA. The company also unveiled the Lenovo PHAB Plus phablet for single-hand use. Lenovo says this device is targeted at today’s millennials and tries to eliminate the dilemma of choosing between smartphones with big screens and small tablets by offering a 6.8-inch device.

Meredith said today’s tech-savvy millennials are being addressed and Lenovo acknowledges the portability struggles associated with tablet computers. The new PHAB Plus conquers these boundaries, merging the fun of a tablet with the portability of a smartphone in a stylish metallic uni-body casing. Unlike other phablets on the market, the Lenovo PHAB Plus boasts a full HD display optimized for one-hand usage. 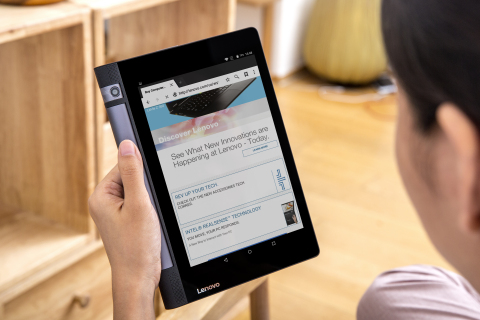 Priced at $299, the new Phab isn’t meant for making calls.

Meredith added that when was the last time you actually made a call with your phone?

As a smartphone, the PHAB Plus addresses users’ 24/7 connectivity needs with a Dual SIM and 4G LTW connectivity built upon an Android v5.0 Lollipop operating system.

For capturing images and video, the PHAB Plus has 13 MP rear and 5 MP front cameras that can produce a panorama selfie. The unit is compatible with both left- and right-handed users. The PHAB Plus also has a 3,500mAh battery, lending up to 24 hours of talk time and 20 days of standby time, courtesy of a built-in platform that limits the internal temperature of the device.

The device is encased in a uni-body design with round edges and polished buttons. It is available in three colours including Gunmetal Grey, Titanium Silver and Champagne Gold.

Lenovo’s PHAB series will also include a PHAB introductory model with an HD screen at 6.98 inches. In addition to the 4250mAh battery life, the device boasts a 360? degree voice feature. The PHAB is 8.9mm thin, 250g and features a colour protective back which is available in Tuxedo Black, Polar White, Aqua Blue or Cherry Red. Cost is $299 and at $179, respectively.

Besides a slew of new product releases, Lenovo also made several significant leadership changes in its PC & Enterprise Business Groups.

Johnson Jia is the new senior vice president, PC Business Group. Jia formerly led the company’s PC & Enterprise Global Operations and has been with Lenovo for two decades most notable as the head of the company’s Think-branded business and Chief Procurement Officer.

“One of Lenovo’s most enduring strengths is the quality and quantity of our talent. We have a deep bench of world-class leaders in this company. With the management changes we’ve made today, we are giving some of our most-seasoned, effective leaders, significant opportunities to extend our leadership in the global PC market, while bringing sustainable growth to our enterprise business.” As part of this reorganization, the company indicated it does not expect any changes to current business strategies for its PC and Enterprise businesses.