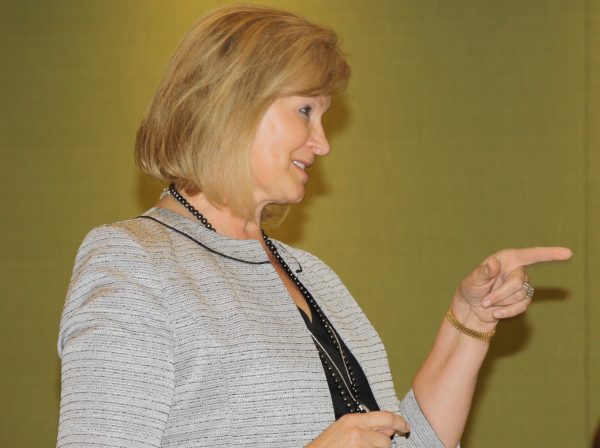 Two years ago when Microsoft Canada President Janet Kennedy looked at the marketplace, all she saw was a sea of competitors. Today, when she looks at the same companies, she sees partners.

“It’s been a fairly radical shift in thinking,” she told a recent meeting of the Canadian Channel Chiefs Council. “It’s an exciting time in the IT industry in Canada. Now it’s less about competition and more about how we can change the world together.”

With the digital revolution set to reshape society in the same way that steam locomotives and automobiles disrupted business in their heyday, Kennedy said the players in the technology sector needs to work together find new opportunities and to provide leadership in the face of the uncertainty that always accompanies change.

Transformation will be fueled by data

“There are lots of factors that drive business change, but we believe technology will transform business more than any other global trend – and the transformation will be fueled by insights that become available through data.”

When Kennedy took over the leadership of Microsoft Canada in October 2013 after close to a dozen years in Chicago as Vice President for Enterprise Customers, she said she was taken aback by the higher than expected pricing in Canada. The reason: not enough competition.

“We’ve been driving costs down ever since,” she said with services like cloud hosting that unlock opportunities for small and medium-sized businesses that wouldn’t be able to build their own cloud.

“We give them the opportunity to do big data and video, which were previously out of reach.”

Earlier this year Microsoft began providing trial access to its two new Canadian data centres in Quebec City and Toronto. Kennedy said six years ago she believed all North American needs would be served by a few regional data centres, but that changed with exploding demand, anti-American sentiment and many government agencies mandating that no cloud data provider could shuttle Canadian data outside the country.

While small and medium-sized businesses dominate the business landscape, they underutilize technology, spending 43 percent less on technology and innovation than competitors south of the border.

A role for government

The new data centres can help them unleash new opportunities, but she said government should take a leading role in helping small and medium-sized firms breach that tech deficit, she said, and also revamp its immigration rules to welcome much needed high-tech immigrant talent.

“If we don’t welcome them, they’ll go somewhere else,” she said.

Female participation in the tech sector has remained stubbornly stuck at 25 per cent for almost a generation and the number of women who have pursued computer science at the university level has declined since 1985.

Steve Proctorhttp://www.itwc.ca
Steve is Vice-President Marketing and Communication with ITWC. He spent 25 years in progressively senior positions as a journalist and editor with the Halifax Herald, with his final ten years as Business Editor. He has published two books and his freelance articles have appeared in national and regional magazines. He has led social media and communication efforts for two crowdfunding ventures and written and directed numerous dinner theatres for charitable endeavours.
Previous article
New solution provider wants to be your innovation lab
Next article
C4 research to explore cloud adoption in Canada