Bitcoin this week got what is perhaps its biggest endorsement yet with Microsoft allowing the digital currency to be used in adding funds to customer accounts.

On its official blog Thursday, Microsoft said that it wanted to give bitcoin users another avenue to spend their e-money, namely “to purchase content in the Windows Store, or in stores that house Xbox Games, Xbox Music or Xbox Video.”

“For us, this is about giving people options and helping them do more on their devices and in the cloud,” said Eric Lockard, corporate vice president of Universal Store at Microsoft in the blogpost. “The use of digital currencies such as bitcoin, while not yet mainstream, is growing beyond the early enthusiasts. We expect this growth to continue and allowing people to use bitcoin to purchase our products and services now allows us to be at the front edge of that trend.” 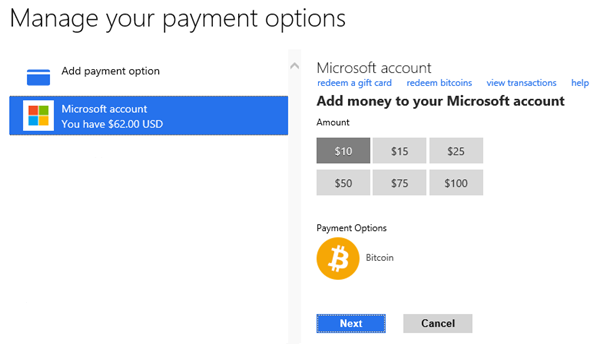 Nevertheless, the blogpost was careful to state that Bitcoins cannot be used to pay directly for anything other than the aforementioned Microsoft products, and that the exchange cap is set to $1,000 per day.

According to Christie Christelis, president of Technology Strategies International Inc., a Canadian digital payments research firm, while progressive, Microsoft isn’t taking much of a risk with this move.

“All that Microsoft is doing is accepting bitcoin payments through BitPay,” he said in an email, explaining that accepting the new currency could just as well be the renminbi.  “I suspect that the number of people that will continue to use fiat currencies for making payment to Microsoft for apps and games will far outnumber Bitcoin users, so the risk is really very small to Microsoft (i.e. if Bitcoin had to collapse, for example).”

However, he added, the company is obviously seeing some demand for it, and is putting faith in the platform.

According to Microsoft, US customers will now see Bitcoin as an option when adding money to Microsoft accounts.  Once the amount of money to be added has been selected, BitPay calculates the bitcoin volume based on market value and displays payment instructions that are then completed through a user’s bitcoin wallet.

“With this move, they are NOT creating a new payment channel or mechanism – which is what Google Wallet and Apple Pay have been doing,” said Christelis.  Offering this payment options “demonstrates that your organization is keeping up with the latest trends and developments – perhaps ahead of the competition, so there is some brand equity in it for you.  [It also] signals that they are keen to try new things.”

One in five consumers will take up virtual currencies: Report

Apple could make it easy to adopt miCommerce