Salesforce partners will get access to Einstein AI next year

The independent software vendors (ISVs) – or “app innovation” partners as Salesforce.com Inc. now refers to them – building on the Salesforce platform will be able to call on Einstein, the new integrated artificial intelligence (AI), next year.

A major focus of Dreamforce, the cloud CRM vendor’s annual conference hosted in San Francisco, Einstein is available to Salesforce users in this year’s winter release. While some capabilities will be seen with automated lead scoring, marketing personalization, and image-based searches, app developers that want to build in machine learning will be waiting until Einstein is released to the platform in 2017, according to Neeracha Taychakhoonavudh, senior vice-president of partner programs and marketing at Salesforce.com.

“We will be able to make all third-party partner apps smarter inherently using Einstein,” she says. Since Einstein is natively integrated to the Salesforce platform, developers aren’t required to use any APIs to call upon the AI. It’ll be a matter of flipping a switch to turn on the automated data modeling. 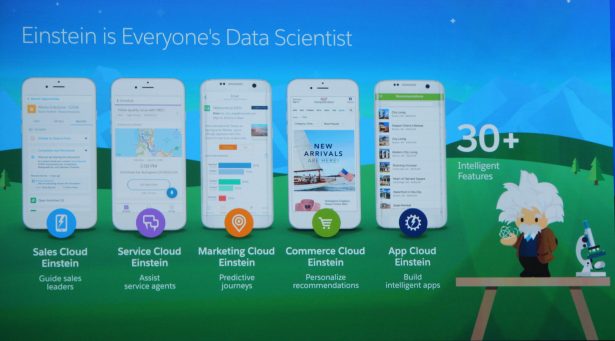 A brief overview of features Einstein will bring to the Salesforce.com cloud suite.

One boon that app developers will enjoy immediately with the Salesforce winter release is a more integrated AppExchange. Rather than accessing the AppExchange by opening up another browser window and logging in again to Salesforce, users will be able to pull it up in the same window and with one login.

“That makes it easier for our third-party apps to be surfaced to end users,” explains Taychakhoonavudh. “We’ve done a number of under the hood enhancements to make third party apps easier to install.”

Behind the scenes, Salesforce’s own sales reps can use a new “partner finder” app to peruse what’s available in the AppExchange ecosystem. The internal app provides more details than what a user would see on the AppExchange. This encourages the reps to recommend third-party apps that could help solve problems their customers are having. Released at the end of August, Taychakhoonavudh says the tool was used for 5,000 searches in the first month alone.

There’s also some new certification updates that Salesforce partners should be aware of. While you’re waiting on Einstein to be available to the platform, you might want to pursue a “PhD” yourself and claim architect-level certification. Previously the only way to claim that title was to become a technical architect, the top certification available from Salesforce University (only 200 people have done this). Now you can become an app architect or a systems architect with two new certifications.

“Instead of all or nothing, there’s now a path in-between,” Taychakhoonavudh says.

Another bonus to partners – all that education is now free. Online content of nine e-books and 27 build scenarios are now available on Salesforce University.

Taychakhoonavudh encourages partners pursuing education here to specialize in a particular industry and back that up with successful implementations in a certain vertical.

“It helps our customers understand that as the Salesforce solutions become more expanded through organic innovation and M&A activity that specialization is available,” she says.