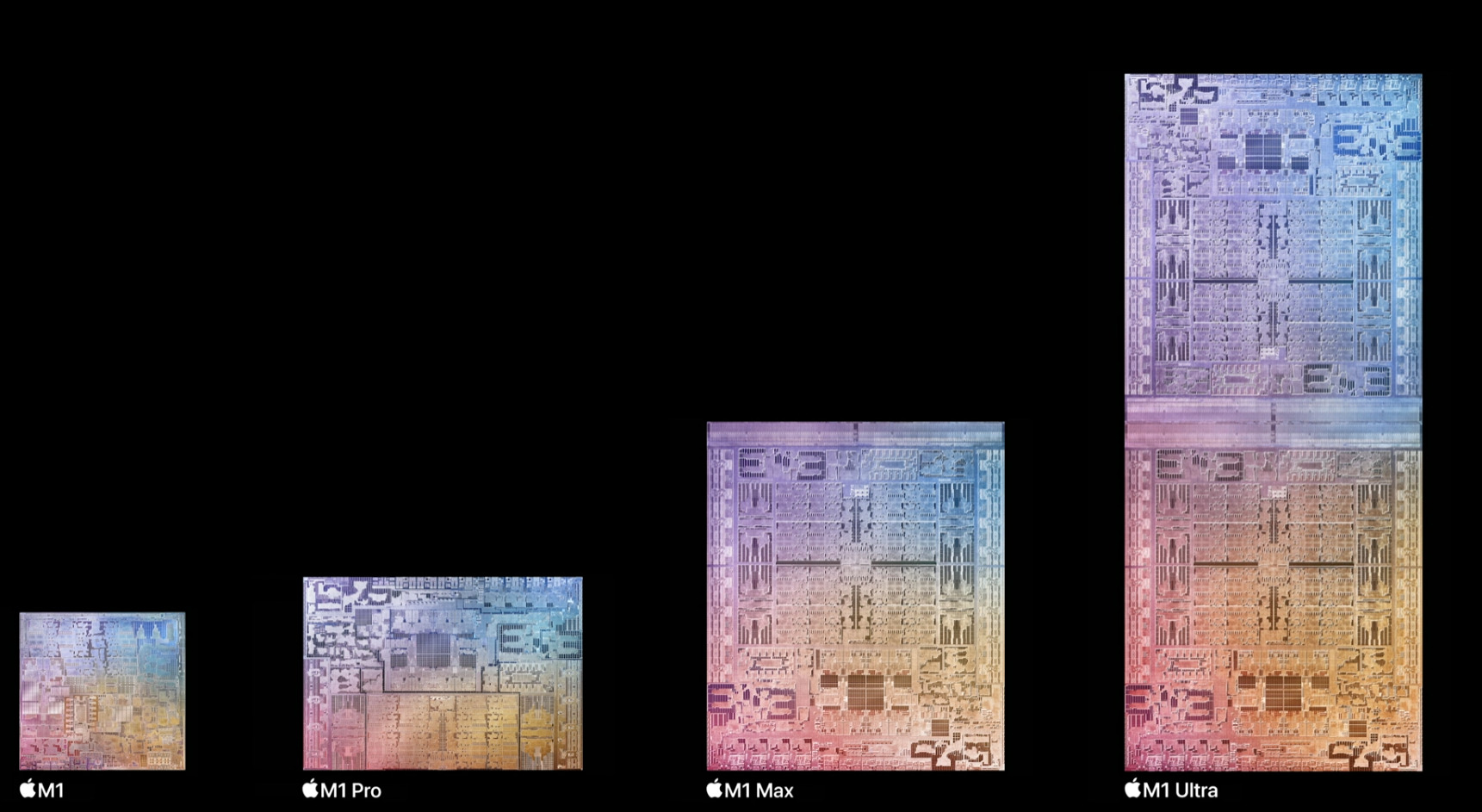 Apple’s new M1 Ultra system-on-chip (SoC) stole the show at its event on March 9, coming with double the number of processor and graphics cores as the M1 Max released just last year. Combined, the M1 Ultra carries 114 billion 5nm transistors by TSMC, the most in a consumer processor. 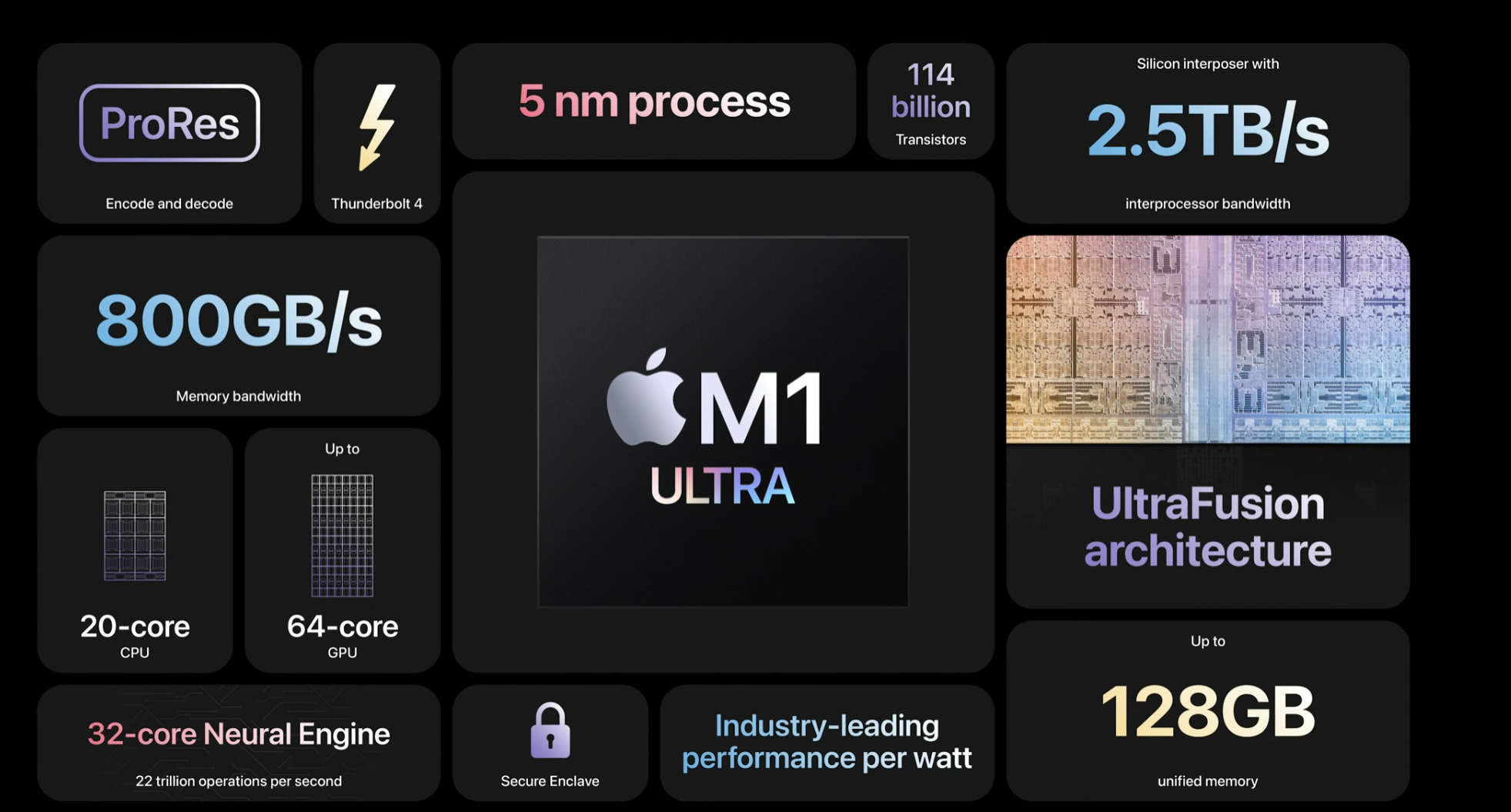 The M1 Ultra showcases the chip’s scalability. To achieve its impressive specs, Apple connected two M1 Max chips together over an “UltraFusion” interconnect. The interconnect has always existed on the M1 Max, but now Apple has finally put it to use. Apple says that this interposer forms a 2.5TB/s inter-processor data highway with minimal latency penalties. 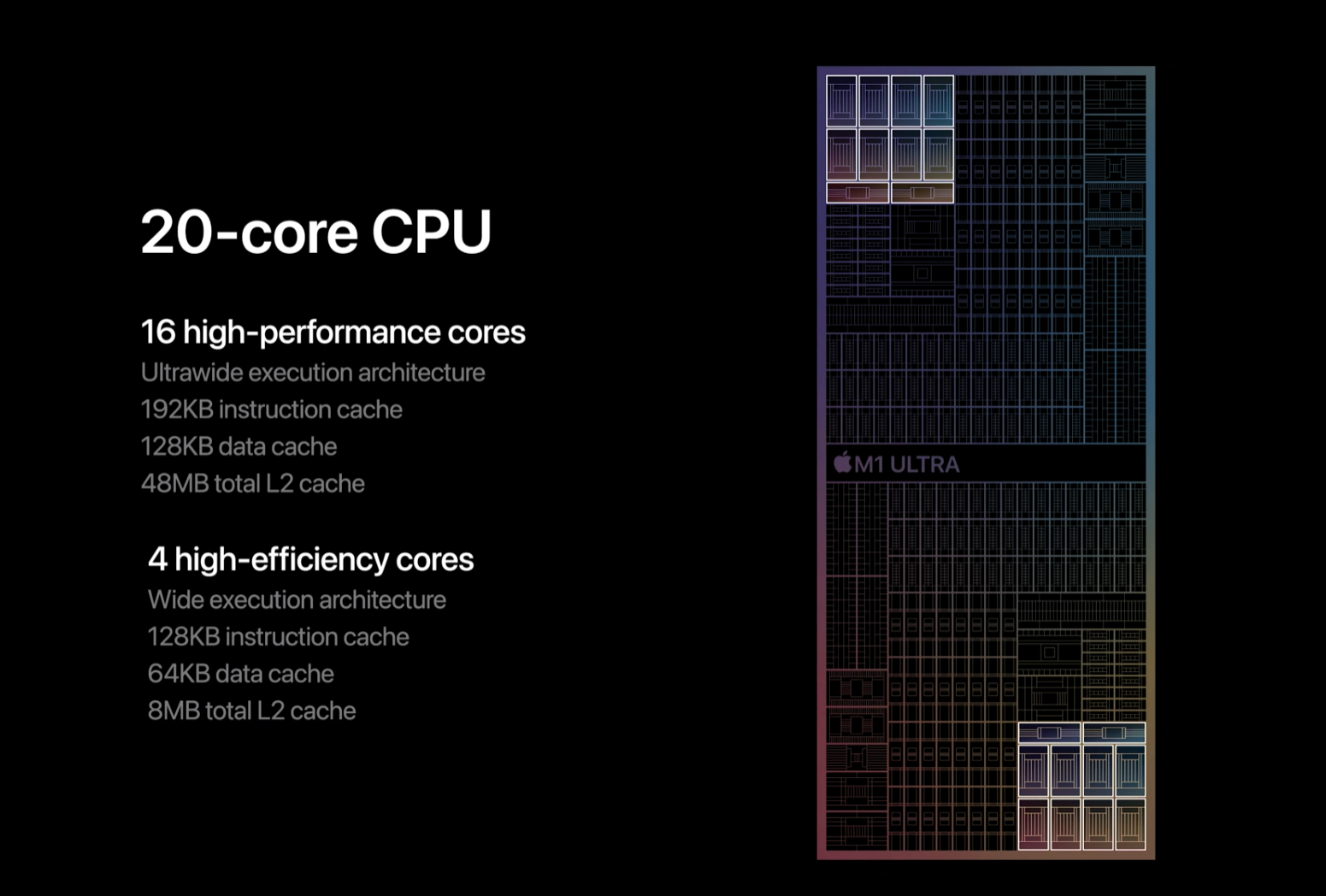 The chip’s 20 cores are divided into 16 performance cores and 4 efficiency cores. The CPU, according to Apple, is 90 per cent faster in multi-threaded performance than the Intel Core i9-12900K in the same power envelope. Additionally, Apple says that at full throttle, the M1 Ultra is 90 per cent faster than a Mac Pro with a 16-core Intel Xeon processor. Note that Apple’s silicon is based on the Arm microarchitecture instead of the x86 that Intel and AMD use.

Connecting two M1 Max dies also doubles the chip’s Neural Engine and addressable Unified Memory. Apple’s M1 chips use a unified, high-bandwidth memory design. Instead of connecting slotted memory to the CPU over traces in the motherboard, Apple moved the memory chips directly next to the SoC package and connected them over an interposer. Moving the memory closer to the processing units greatly reduces the latency. It also saves some space on the motherboard for additional features, or reduces the overall footprint of the device. But because of this approach, the size of the SoC package now becomes a limiting factor. Now that the M1 Ultra doubles the package size of the M1 Max and has double the memory support, its memory capacity has naturally been bumped up to 128GB.

The 128GB of unified memory is shared between the CPU, GPU, and the neural engine and is addressable by the entire SoC. A larger memory pool is especially beneficial for data-rich workloads like 3D design and movie production, where the programs require massive assets to be stored in memory for the best editing performance. Max memory bandwidth has–you guessed it–also been doubled to 800GB/s. Moving large amounts of data quickly from memory is important in maximizing the processing performance of the chip.

Although most high-end desktop systems can have 128GB of system memory, what Apple’s advertising here is its application in graphics processing. Professional graphics cards with high amounts of graphics memory can easily cost thousands of dollars, and with the current semiconductor shortage, good luck buying one as an independent. The point is made more salient with Apple’s focus on graphics performance during its presentation. The company touts that combined with the 64-core GPU, the M1 Ultra is 4.5 times faster than the AMD Radeon RX 5700 XT and 80 per cent faster than the AMD Radeon Pro W6900X in the current 27-inch iMac.

Apple also showcased impressive power consumption figures. The M1 Ultra only needs “under 100W” to reach the peak performance of the competing desktop processors. By comparison, the Intel Core i9-12900K uses around 300W at full throttle.

That power and efficiency is what enabled Apple to put the M1 Ultra in the compact Mac Studio. The Mac Studio is about twice as tall as the Mac Mini, but has the same footprint. It can be configured with up to 8TB of storage and features a dual-fan cooler that draws air from the bottom and expels it out the rear.

Tom Li
Telecommunication and consumer hardware are Tom's main beats at Channel Daily News. He loves to talk about Canada's network infrastructure, semiconductor products, and of course, anything hot and new in the consumer technology space. You'll also occasionally see his name appended to articles on cloud, security, and SaaS-related news. If you're ever up for a lengthy discussion about the nuances of each of the above sectors or have an upcoming product that people will love, feel free to drop him a line at [email protected]
Previous article
Channel Bytes March 11, 2022 – Women in Cyber nominations open; new competency for Ingram Micro Cloud; datacentre capex spend growing; and more
Next article
Studies reveal that full-stack observability and automation adoption are priorities for businesses in 2022