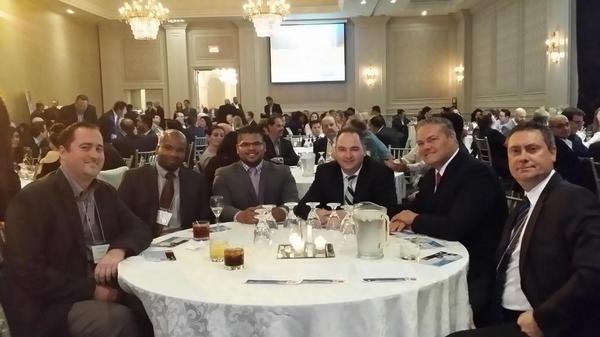 Everyone was a winner at CDN’s Channel Elite Awards event at the Hazelton Manor in Vaughan, Ont., last week.

Twenty five of Canada’s leading solution providers went home with awards but the rest of the nearly 200 people that attended the event also enjoyed an evening of fun, fine food, entertainment and camaraderie.

Here’s a look back at the evening through the tweets of those who were there:

Just a few hours away from #cdncea 2014. Beautiful new venue this year! pic.twitter.com/D46cHhIOpu

The panelists provided attendees with insightful information on “Selling to line of business.” Folks from IT Weapons were very attentive as noted in this tweet.

The stage2data team was present in full force too.

In the spirit of partnership and friendship, a lot of companies congratulated and wished others luck in winning the awards before the event.

Congrats to all the Finalists. So happy to be a part of such an Elite group of resellers #Commerx #CDNCEA pic.twitter.com/068WRv0NXg

Excited to be at the awards, congratulations to all the finalists! #CDNCEA

We are at the awards! Good luck to all finalists! #CDNCEA

While others were delighted to be a part of the Channel Elite Awards.

I'm at an award show. Never thought I'd say that… #cdncea

Everyone at the event had a hearty laugh and applauded at Paolo’s Ice bucket challenge video.

Proud to accept the Gold Award for Best Mobile Solution in behalf of @EsriCanada #cdncea pic.twitter.com/PrxXr5of0C

And oh yeah…the food was great too : )

#cdncea A huge shout out to the chefs and staff for the amazing dinner last night. Truly fantastic, everything was delicious, a 10/10!

Wolston Lobohttp://www.itbusiness.ca
Wolston is a social media and SEO enthusiast. He has previously worked with brands like Gillette and Channel V. He is passionate about gadgets and loves the internet served with a hot cup of coffee.
Previous articleHP Canada names new channel chief for enterprise unit
Next articleCDN Digital Edition explores Women of the IT Channel

Interesting Tweets from the new president of Cisco Canada