Viewsonic is re-inventing its channel program

Digital display vendor is working on relaunching its Finch Club channel partner program. Deidre Deacon, the general manager of Viewsonic Canada told CDN that the company is planning on doing a formalized relaunch of the program in the early part of 2018.

Finch Club was introduced in early 2009 along with Viewsonic’s GovEd channel program. Finch Club was rebranded then from Access Partner Program and was not tier and positioned to focus on the burgeoning digital signage market.

The 2018 version will be a tier program (Platinum, Gold and Silver) and will focus providing incentives to channel partners who specifically target the education sector. The new Finch Club may not be called that when its launched but Deacon said it will give partners access to sales reps along with national sales support, bid pricing and through distribution a partner portal and deal registration.

“The resellers are a big opportunity for Viewsonic going forward and the deal registration for the channel will be through distribution and they will give them the price. This process will be managed by Viewsonic,” she said.

Viewsonic is not stopping there as the executive team is working to also provide channel partners with evaluation units and seed units.

Company president Jeff Volpe said that solution providers are developing new big data solutions for customers and Viewsonic can be part of that complete solution as a digital display for the data.

“What we are seeing for Canada is to expand the channel partner base, while also going deeper with the partners. We are working on a 360-degree review of the program to include new services and other elements in engineering and new technology. We want partners to learn more about the entire Viewsonic portfolio and how we have expanded it. There are several emerging markets and we want to position ourselves for these new business opportunities namely in collaboration, classroom, workshop and corporate boardrooms,” Volpe said.

Deacon added, there will be new channel thresholds for the program that will focus on providing new incentives for partners to go across the entire portfolio of products. Three new products the channel should consider are the new ViewBoard, large format displays and the high brightness projector.

Volpe said that Viewsonic has worked to develop new products that can play a role in business. “People still want screen-size resolution and these types of displays can present big data a lot easier,” he said.

Viewsonic has also developed new software and firmware for these products called ViewSplit, which splits the screens in various configurations.

The ViewBoard is an interactive annotation software-based display with stand that can be wheeled in and out of boardrooms or attached to a wall. The ViewBoard is being positioned as a replacement to whiteboards as its can write, highlight, edit, and transform documents and images on-screen in real-time. Viewsonic has made to the ViewBoard to support all of the top document and multimedia file formats. There is even an integrated screen camera that enables users to record, capture, tap, pinch, and swipe media on the screen. 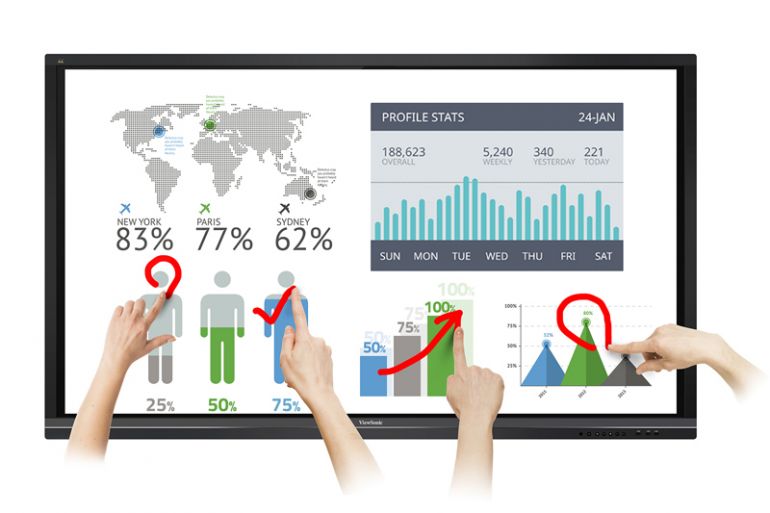 Not just desktop monitors any more: a conversation with ViewSonic’s Jeff Volpe