Virtualization opens workstation as a service model for channel: Dell 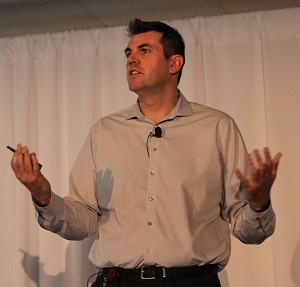 Speaking to international media on Thursday at the vendor’s Texas headquarters, Andy Rhodes, global manager of Dell’s workstation business, said the vendor has been building up its channel capacity on the workstation side over the last 18 months.

“I think we embrace workstation as a service,” said Rhodes. “We’re not going to offer it from the Dell side, but we will absolutely encourage our partners to do that.”

To help partners get there, the vendor unveiled its new Dell Wyse Datacenter for Virtual Workstations end-to-end reference architectures. They’re deigned to help customers simplify and speed the deployment of high-performance, reliable and secure desktop virtualization running graphic and data-intensive workloads with tested and certified configurations. Applications for Siemens PLM Software, Autodesk, PTC Inc. and Dassault Systémes are also certified for the virtual reference architectures or will be shortly.

Employees will benefit from geographic flexibility and mobile access to workstation compute and applications from different devices, and the IT department can leverage a centrally hosted and managed graphics environment.

While workstations will still be on desktops for many years to come, megatrends around virtualization and the data centre are fundamentally impacting how workstation-class computing is architected and delivered, said Dell.

The first trend Dell sees is around compute moving from the desktop to the data centre. It’s been happening for some time with standard desktops for knowledge workers and specific use cases. It hasn’t happened on the workstation side for a number of reasons, said Rhodes – some were technological, and have been addresses by companies such as Nvidia. Others were more cultural.

Dell says its new mobile workstation is light and ultra-thin

“In workstations, the people that hold the budget are the people that use the budget, and there’s still a propensity for them to hold on,” said Rhodes. “Workstations are mission-critical in their environment and they don’t want to effect the status quo.”

But there are a number of reasons why virtualizing workstations into the data centre absolutely makes sense, said Rhodes. Security is a big one – rather than sending proprietary data between offices over the Internet, it can reside in a secure private cloud. Collaboration is another – people inside and outside a company can work on the same project, at the same time.

“The idea of one person completing one piece of work independently doesn’t work anymore,” said Rhodes. “If you have to move huge files around the world it’s very slow, it can be very expensive, and it can really stop the real-time collaboration for many of these companies.”

Workstation virtualization enables access from multiple devices, and it allows organizations to buy compute power for typical usage, rather than peak usage.

The second megatrend is around democratizing access to professional quality creation. You need the right tool for the right job, said Rhodes. A steak knife and a scalpel both cut, but a surgeon isn’t going to slice open your chest with a steak knife.

Finally, the third megatrend is around the mission criticality of creation. There’s a need for technology to help maximize creative potential, said Rhodes. If an artists has a spark of creative genius, and the technology slows them down because it’s slow or kludgy, often the spark is lost.

“We’ve turned a corner on virtualization,” said Vajrang Parvate, director of product development at SolidWorks, a 3D CAD design software vendor. “All our products can now run on a virtual stack without any compromise in performance. We’re seeing a rapid increase in demand and interest from our customer base.”