Intel doesn’t normally support backwards compatibility for its consumer processors, but Rocket Lake-S does. Owners of the 400 series platform can upgrade to Rocket Lake-S with a BIOS update.

Rocket Lake-S still uses 14nm transistors, but its core architecture, codenamed Cypress Cove, backports the Sunny Cove core design of Intel’s 10nm “Ice Lake” processors. This creates an interesting product where the architecture and feature changes contribute to most of the performance improvements. 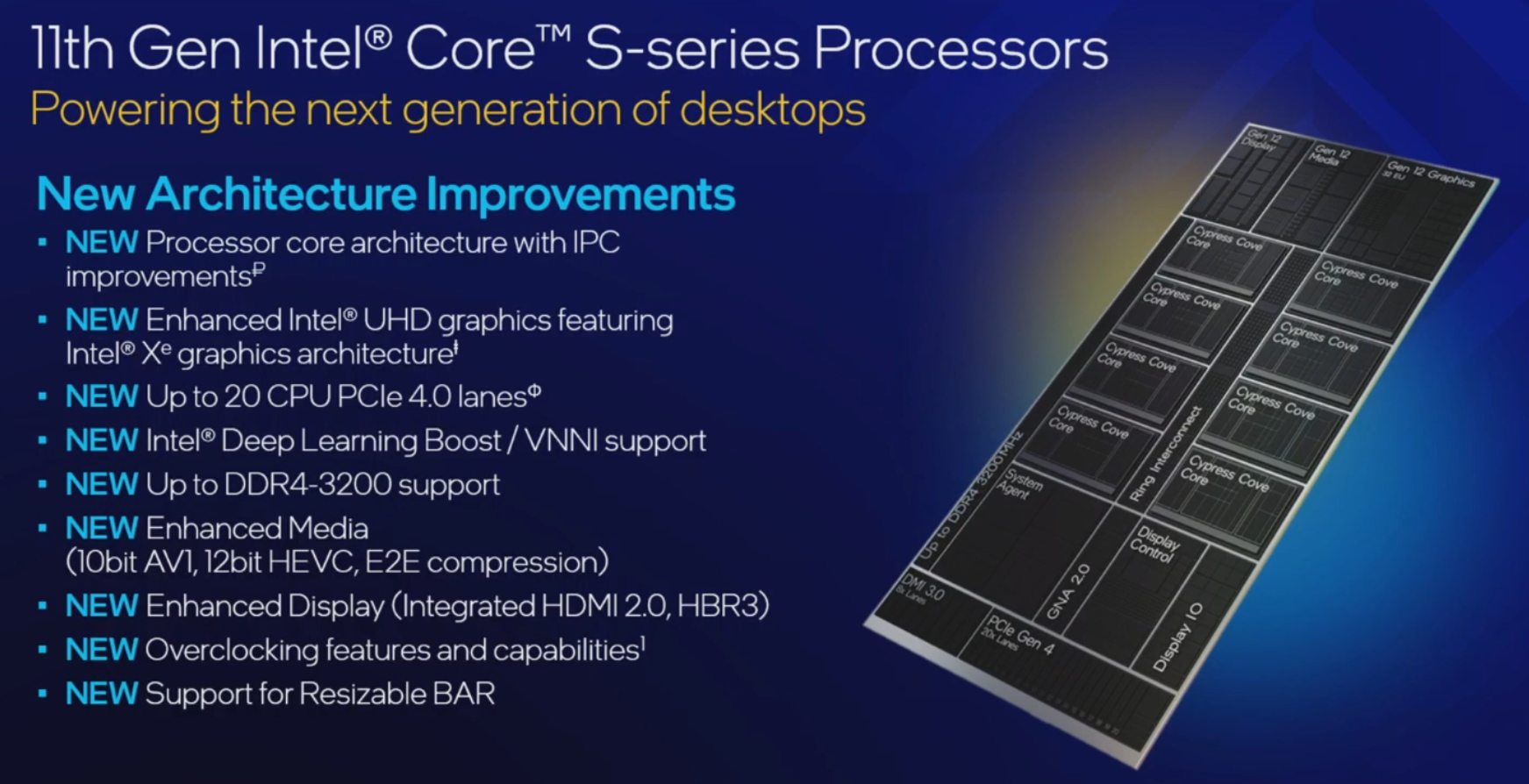 Rocket Lake-S features in a nutshell. All image credits: Intel

But there’s a drawback to this architecture traversal: die size. Without 10nm’s density benefits, Rocket Lake-S could only support up to eight cores without exceeding a die size limit. With two fewer cores than Intel’s 10th gen Comet Lake-S desktop processors, Rocket Lake-S may lose out to its bigger competitors in multithreaded applications that can take advantage of the higher core count.

In case you missed it:

For Rocket Lake-S, Intel continued to pursue instructions-per-clock (IPC) gains and higher core frequencies, pushing Rocket Lake-S max frequency to 5.3 GHz. The company had previously stated that “games and most applications continue to depend on high-frequency cores to drive high frame rates and lower latency” to clarify its focus on higher clocks.

A new memory controller now supports up to DDR4-3200, a slight jump over Comet Lake-S’ DDR4-2933MHz. Intel says that it also supports improved overclocking capabilities. More on this in the chipset section below.

The CPU cores are flanked by the new integrated Intel UHD graphics based on the Intel Xe graphics architecture, the same homebrew graphics technology that debuted with Intel’s 11th-gen “Tiger Lake” mobile processors. 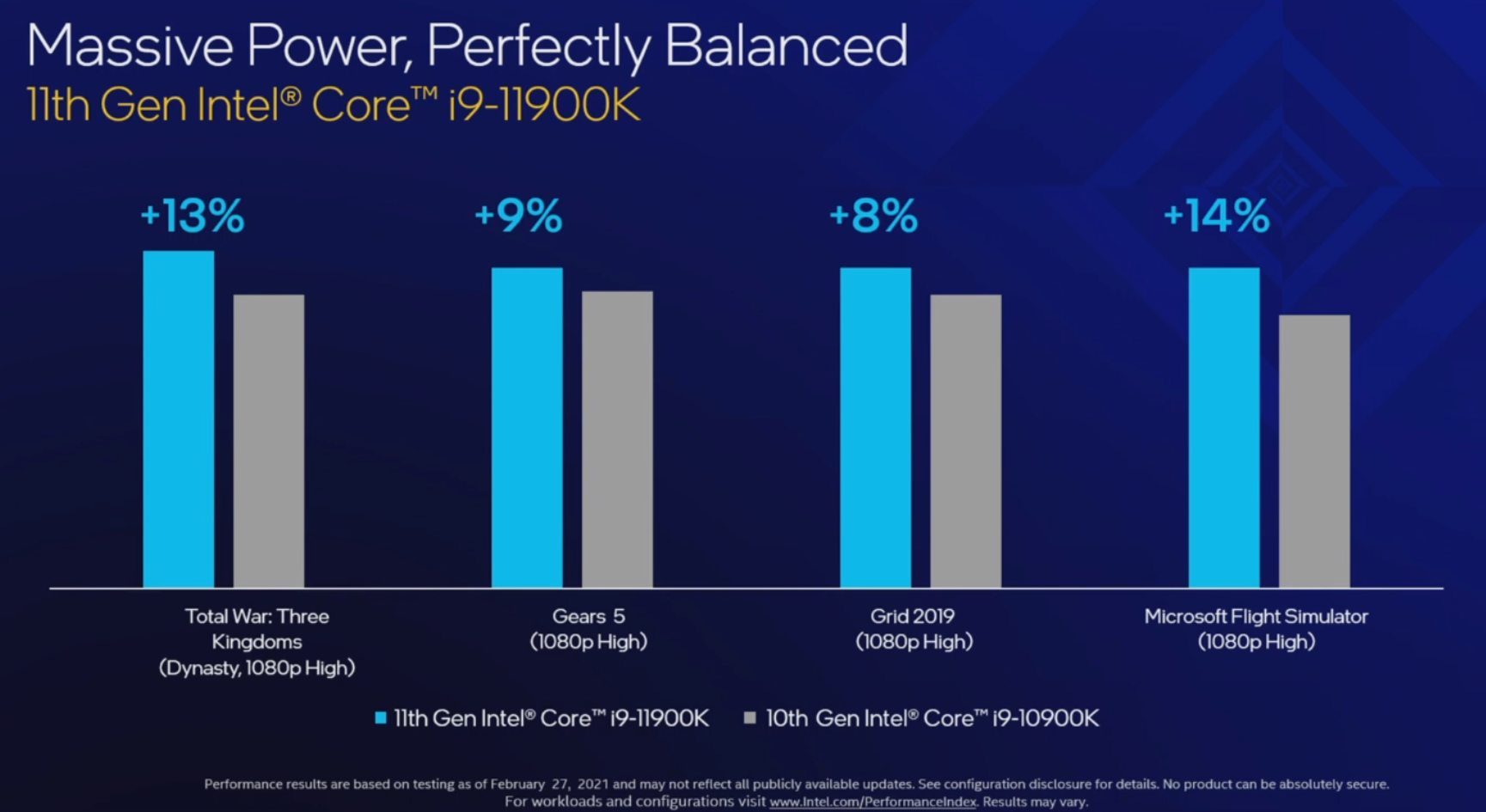 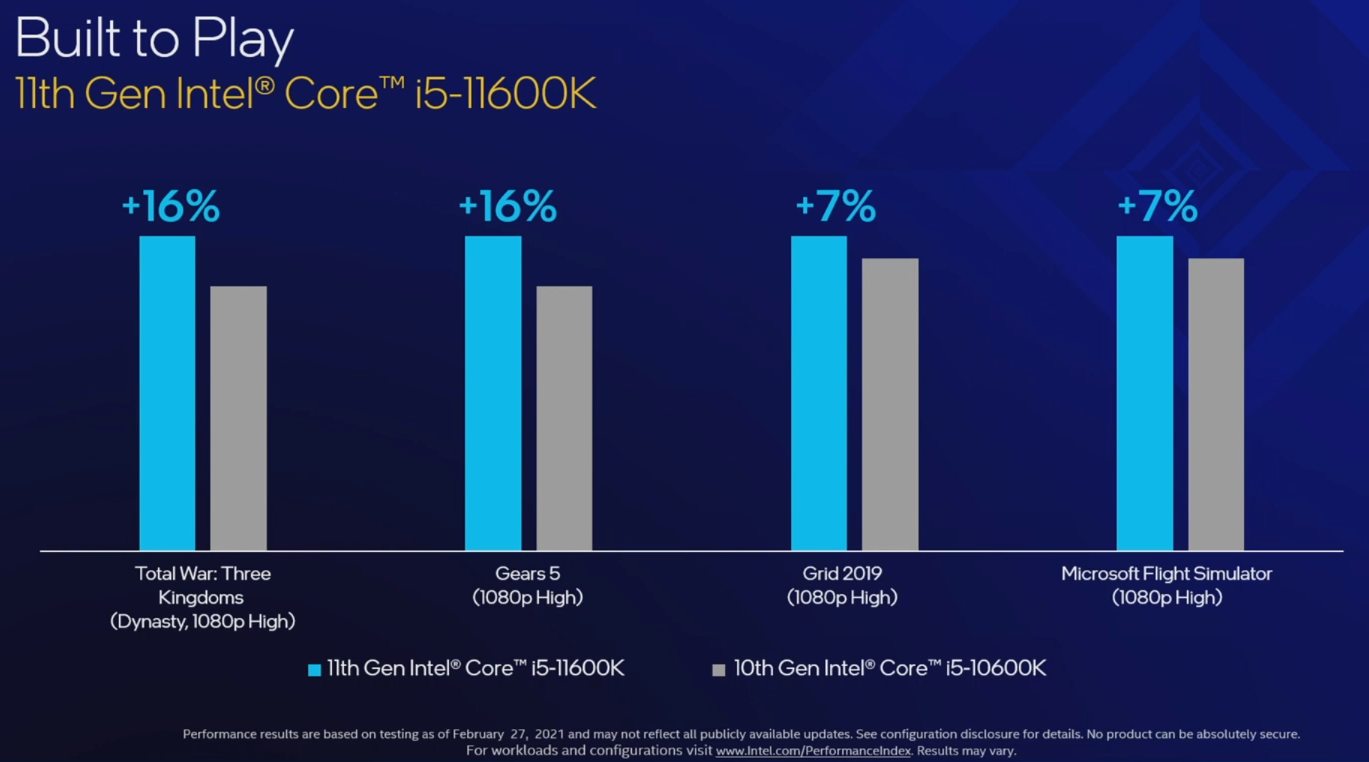 The same performance gain translates to products lower on the stack.

Another big feature is Resizable Basic Address Registers (BAR). It lets the CPU access the entirety of the GPU’s VRAM as opposed to a pre-defined portion. This speeds up the communication between the CPU and GPU, allowing data to transfer more efficiently between the two.

Intel said despite its lower core count, Rocket Lake-S can outperform its competitors in AI-accelerated workloads thanks to its VNNI and Deep Learning Boost AI enhancements. On average, Intel showed Rocket Lake-S achieving 1.2x the performance of the AMD Ryzen 9 5900X in several production suites. With that said, only a portion of today’s production and productivity workloads are actually AI accelerated. The performance gains shown here do not indicate similar performance gains in all scenarios.

There are some major improvements to the chipsets as well, with the most notable being the wider Direct Media Interface (DMI), unlocked memory overclocking support to lower-end chipsets, and faster USB support.

Intel’s DMI is the data pathway between the chipset (also known as the PCH, or Platform Controller Hub) and the processor. Whereas a certain number of PCIe lanes connect directly to the CPU, the motherboard chipset can also facilitate a few PCIe connections. The PCIe lanes from the motherboard are routed to the DMI, dividing the DMI’s bandwidth among them.

For Rocket Lake-S, Intel widened the DMI from four lanes to eight, doubling the bandwidth between the chipset and processor. This allows for more devices connected to the motherboard’s PCIe lanes to operate at their peak.

Previously, only the high-end Z-series motherboard chipset supported memory overclocking. The 500 series unlocks this feature for the H and B series as well, removing the restriction for faster higher-quality memory for lower-end platforms as well.

The last big feature is USB support. The 500 series chipsets now support USB 3.2 Gen 2×2 with a maximum 20Gbps bandwidth, double that of the maximum supported by Comet Lake-S.

With the introduction of Rocket Lake-S’ Adaptive Boost, Intel now has four boost modes. Here’s a quick summary of what they do: 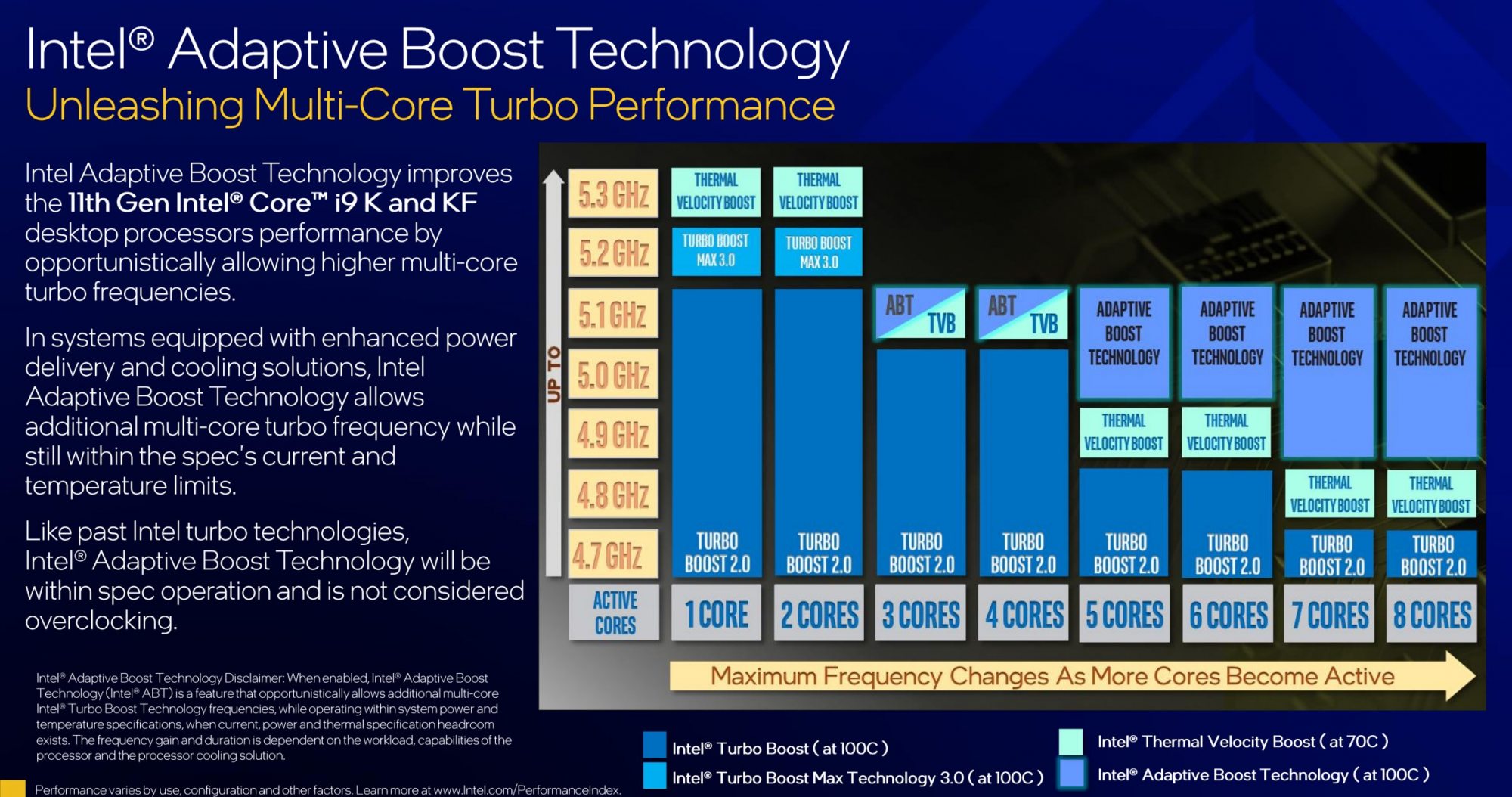 This means that Rocket Lake-S should be able to hit 5.1GHz on all cores with a good enough cooler. Hence, understanding its TDP and power consumption, especially at the higher PL power states, is more important than ever. 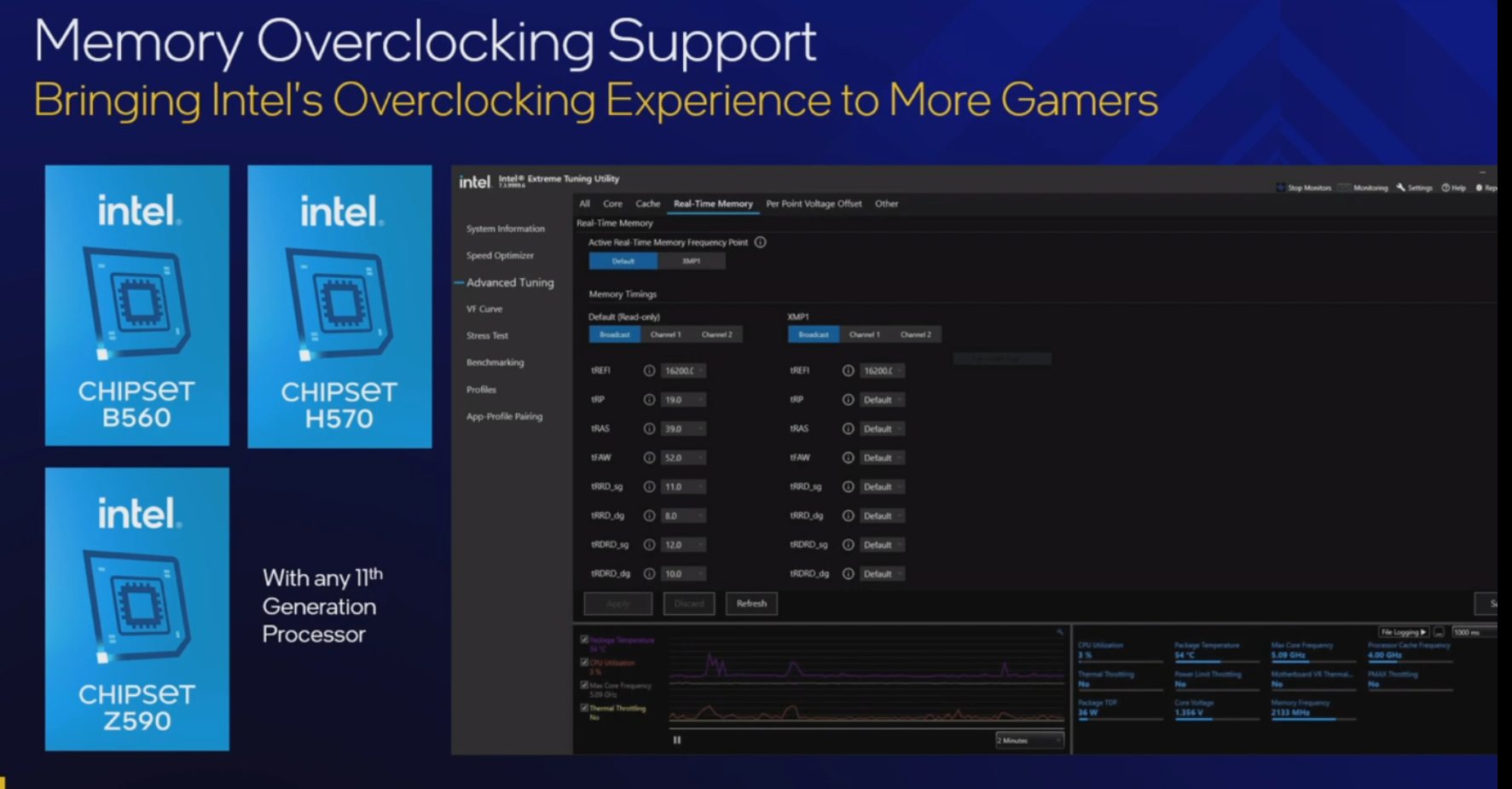 Certain motherboards will support Real-time Memory Frequency, a feature that lets overclockers switch to an overclocked memory profile in Windows without rebooting and accessing the BIOS.

For niched overclocking enthusiasts, Intel has improved control over AVX2 and AVX-512 instruction offset and also allows overclockers to adjust the voltage guard-band. Further, overclockers can toggle AVX on and off. Note that these are niched features that will not affect most real-life consumer workloads. 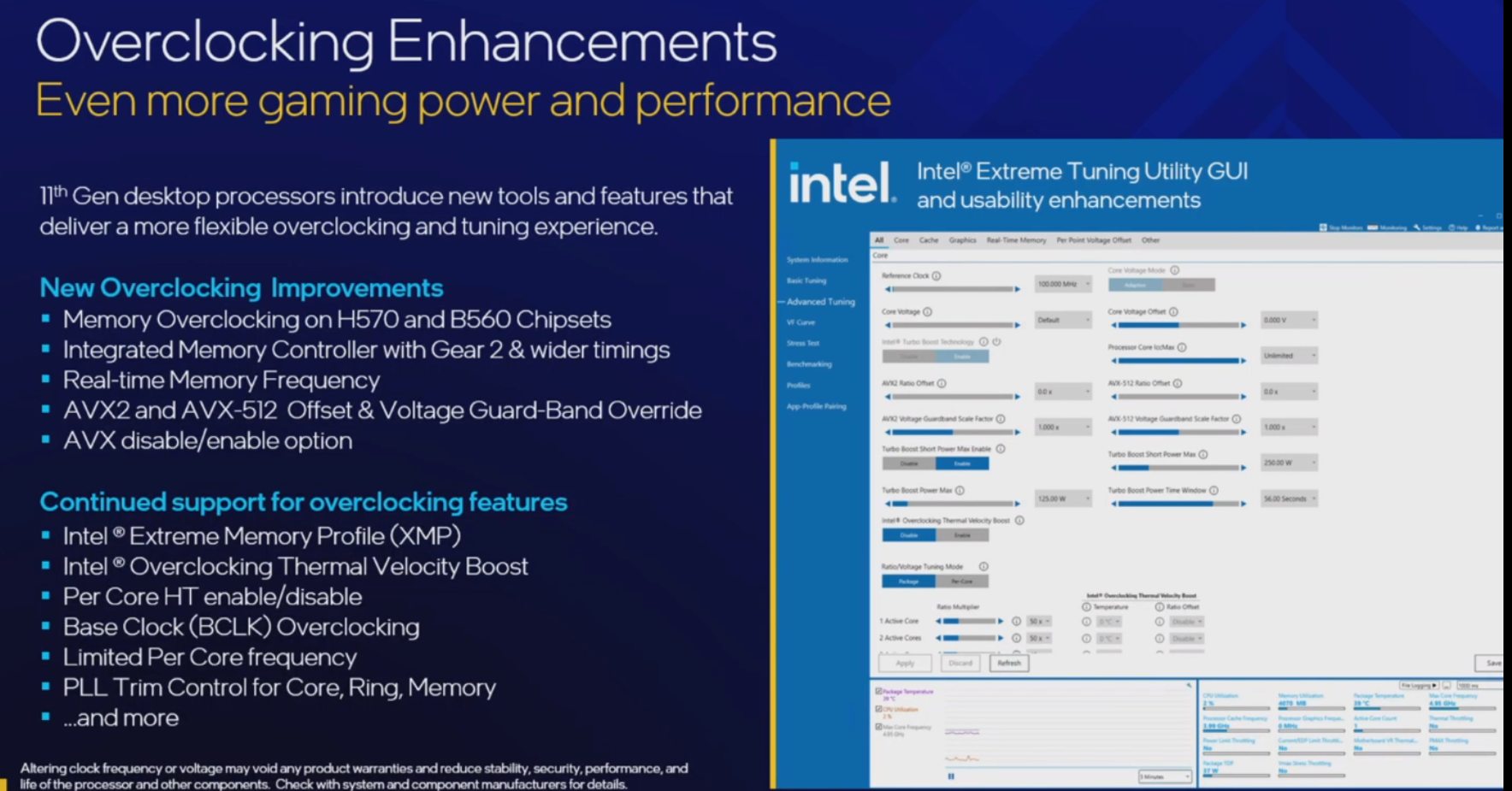 With all the hype Intel fanned around overclocking, it isn’t a total shock to see a pricing jump for all the unlocked parts. The top-end Core i9-11900K is priced at US$539, a $50 premium over the 10-core Core i9-10900K from last year. Whether it can be justified in its price increase will be revealed in independent tests. The Core i7-11700K/F also jumped by US$25, up to US$399 from US$374. With that said, the popular Core i5 segment is the only one that maintained the MSRP for its unlocked part. 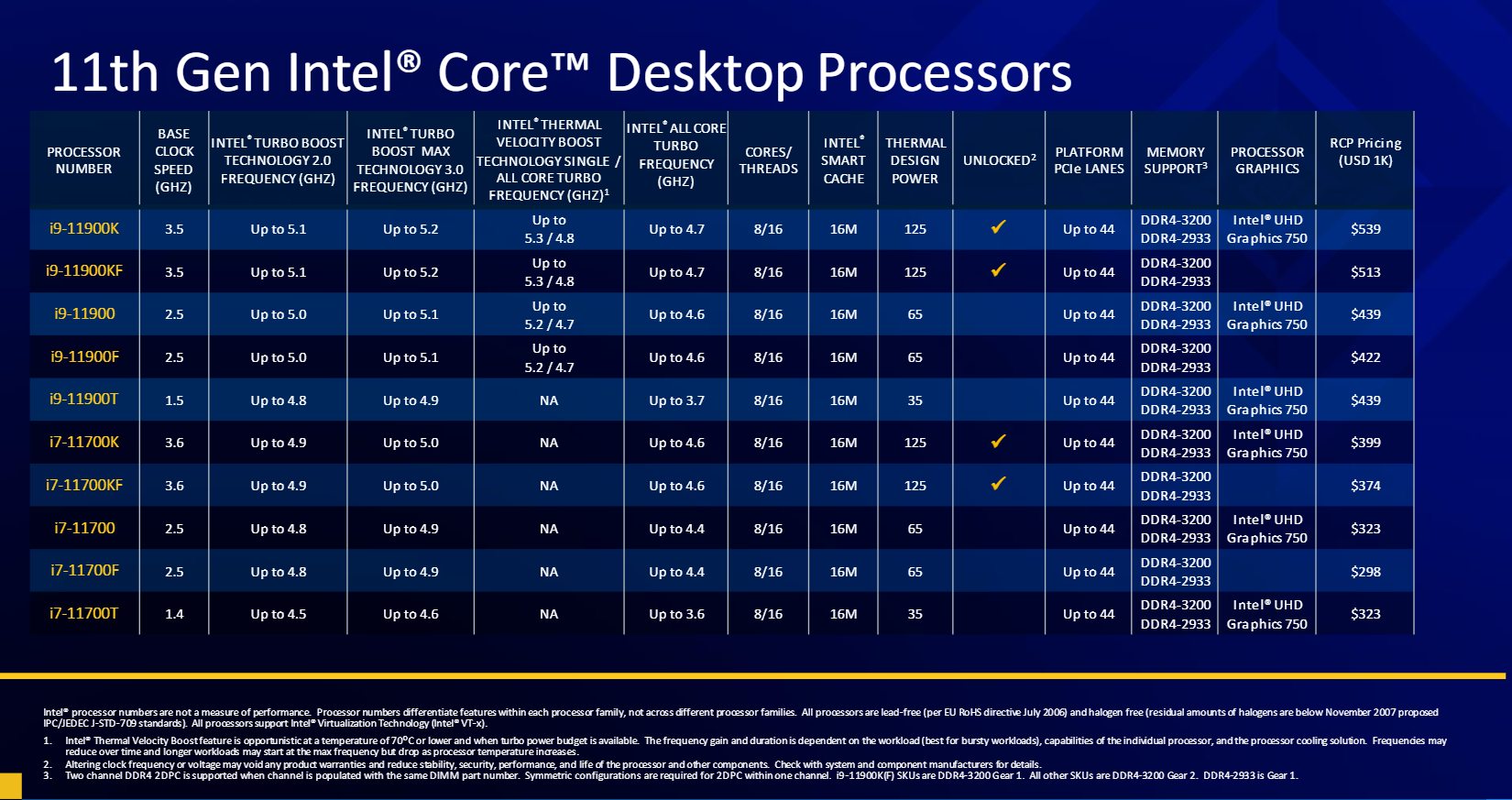